There’s no place like Philadelphia’s Walnut Street Theatre this season to see The Wizard of Oz in all of it’s enchanting glory! With the Royal Shakespeare Company’s adaptation of L. Frank Baum’s original story, written in 1890, Director Glenn Casale, and an incredible cast and crew, chart a magical musical journey over the rainbow, down the Yellow Brick Road, straight to the heart in this endearing classic for all ages.

When a neighbor threatens the well-being of her darling little dog, Toto (Dusty), Dorothy (Adrienne Eller), who lives on a farm in Kansas with her Aunt Em (Lyn Philistine) and Uncle Henry (Fran Prisco), looks to them, and their farmhands for support, but the situation is impossible. Finding her family and friends lacking, Dorothy runs away, but is persuaded to return home by a phony, but good hearted, traveling psychic she meets along the road. Too late. A raging tornado twists her plans topsy-turvy landing her in Oz where she makes many new friends, and one very wicked enemy, has adventures, some misadventures, but above all, a valuable lesson is driven home as she learns what really matters most.

A vibrant ensemble and extraordinary orchestra, conducted by Music/Vocal Director John Daniels, keep the excitement alive on stage at all times. Adrienne Eller graces Dorothy with a strong, beautifully clear voice when singing or speaking, and an overall touching sincerity that could pierce through the toughest core, particularly during “Over the Rainbow.” Her manner and interaction with other characters on stage appears perfectly youthful, unaffected and trusting. Toto, her dog, played by Dusty, a rescue, is adorable and amazingly well trained by William Berloni.

Glinda is portrayed with elegant distinction by Lyn Philistine, who sings delightfully in the marvelous Munchkinland number “Ding Dong! The Witch is Dead!” and also projects a firm, yet loving Aunt Em.

Uncle Henry’s character, and that of the Emerald City Guard, display both strength and sensitivity as put forth by Fran Prisco.

Bill Van Horn, who plays The Wizard and Professor Marvel, delivers one of the most memorable lines of the show as The Wizard: “Pay no attention to the man behind the curtain” with quiet caliber, and finds just the right resonance for all of his lines, including the all powerful Wizard of Oz.

The Scarecrow is played with pluck by Christopher Sutton. The Tinman is tenderly rendered by Christopher Shin, and Nichalas L. Parker’s sonorous Cowardly Lion, is ferociously funny!

All three performers, respectively, have great voices, and are spot on as Hunk, Hickory, and Zeke as well. The wonderfully Wicked Witch of the West, is at her best worst, meaning she is absolutely awesome – just screams “mean,” as performed by Ellie Mooney who also plays nasty neighbor, Miss Gulch. The children’s and adult ensembles, supporting and principals performers work together as one total entertainment machine.

It is a treat to behold the technical feats present in this production. The transition from somber, dismal misty hues at the opening, into the terrific tempest scene that escalates where sound designed by Ed Chapman, and lighting by David Neville seem to carry the storm into the aisles, until the curtain rises on the Munchkinland where the vibrant costume colors, simply pop against a bright, spectacularly attired set devised by Stephen Gifford, is tremendous.

In other spots Monkeys and other characters do fly, fire shoots from the Wicked Witch’s finger tips and broom, echoes rebound from powerful beings, and light lifts and sets moods, shifting them splendidly. Scene changes and segways appear seamless, and the complexity of sumptuous, multi-textured, costumes fashioned by Mary Folino are a fascinating in of themselves. The layers and detail of the Tinman’s and Lion’s outfits, the Crows, gleefully played by Jesse Jones and Ben Liebert, the Lollipop Guild and more, are incredible and stunning.

By any means of conveyance, be it car, bus, broom, bicycle, wooden cart, ruby slippers, or twister – you must follow the Yellow Brick Road to Walnut Street Theatre’s captivating and magical The Wizard of Oz! 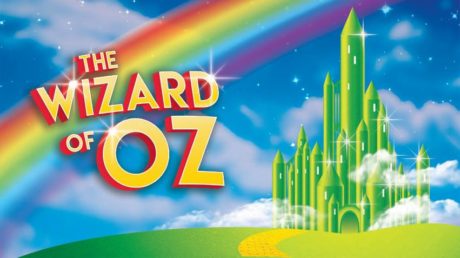