John Guare’s Six Degrees of Separation was widely admired as an ingenious, penetrating look at contemporary society when it premiered in New York back in 1990. Based on a true story, it concerns a young, black, gay grifter who insinuates himself into some of Manhattan’s most sophisticated homes, posing as Sidney Poitier’s son. Ultimately, this drama exposes the illusions and neediness of all humans, from the ‘top’ of society on down, while reminding us – for better or for  worse — that we are all family, related to one another by no more than six mathematical degrees.

For all its clever construction and memorable lines, one might be tempted to treat Guare’s play as an artifact from an earlier era, when calling out stereotypes and inequities seemed breathtakingly daring and new. Many fine dramas have expanded on similar themes since that time. So why revive it now?

Foremost, The Keegan Theatre production reminds us of the enduring magic of Guare’s stagecraft. The play, which moves from fast-paced ensemble work to trenchant soliloquies is still funny, moving, and provocative. Brought to life by Director Brandon McCoy’s terrific staging, the play features uniformly excellent performances by actors who draw their diverse characters with surgical precision.

Beyond this production’s values, perhaps Guare’s dense and idea-filled drama still intrigues us because we continue to struggle mightily with social ills and painful issues of identity. We worry, with good reason, about societal dislocation. We see our deepest fears mirrored in microcosm within our own families. And we recognize the value of well-wrought dramas to articulate our most important and intimate concerns.

Let me provide some context by looking briefly at some other DC area recent productions. In The Arena Stage’s memorable staging of Ayad Akhtar’s Disgraced, the masquerader is not an outsider who fools the family at the center of the drama, but the main character himself. Amir, a successful lawyer in a Manhattan firm, gets ahead by masking his Muslim identity in an increasingly Islamophobic world. Forced to reveal himself after he defends an imam from a (probably) bogus charge of aiding a radical group, his life veers out of control. The larger issues of unfair stereotyping invade his gorgeous New York apartment, costing Amir his wife and nephew, his home, and his self-worth as he descends into a crisis of identity.

The Studio Theatre’s current, excellent production of Straight White Men looks at a Midwestern dad and his three adult sons who gather for the Christmas holiday. Beneath the surface bonhomie and cheaply tinseled surroundings, an existential crisis lurks. There is no intruder and no real masquerade, but each of the sons must face the burden of being a privileged white male. What is expected of them? How do they measure up? How do they know when they have succeeded and what do they do when it is clear they have not? Most importantly, the play questions how a family must function when the fissures between each member threaten to become unbridgeable.

Guare’s play speaks to the primal importance of family and the challenges it faces from both the outside and within. In his work, the offspring of parents duped by ‘Paul’ are an eye-rolling, disaffected bunch who disparage their mothers and fathers as fools. Is it any wonder that one of those mothers reaches out to the dishonest Paul, and that this vulnerable young man reaches back, hoping against hope to create a divine spark of familial connection between two people who have been shrugged off by their closest kin?


Perhaps it is no accident that during this incendiary year, familial themes cross-hatched with the politics of identity have echoed through some of the DC area’s most well-received plays. If you ever doubt the power of theater to shine a spotlight on our most crucial conversations, look no further that Friday night’s performance of Hamilton, when actor Brandon Victor Dixon stepped out during the curtain call to recognize our Vice-President Elect in the audience, and say to him, “We thank you for sharing this wonderful American story, told by a diverse group of men and women of different colors, creeds and orientations.” 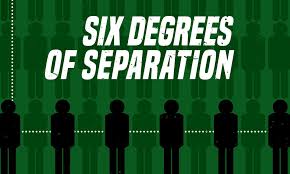 LINKS:
‘Six Degrees of Separation’ at The Keegan Theatre reviewed by Julia Hurley.

‘Six Degrees of Separation’ at The Keegan Theatre reviewed by David Friscic.

Magic Time: ‘Six Degrees of Separation’ at The Keegan Theatre by John Stoltenberg.