A Midsummer Night’s Dream by William Shakespeare has long been among my favorite plays. If it isn’t already yours, the Mason Players production could well change your mind. What kind of comedy do you prefer? It is likely in this show. Slapstick, bawdy, highbrow, word play? I tell you it’s in there. It is fun to listen to and fun to watch. If romance is more your style, it has the bases covered there too, with four couples eventually getting together despite confusions such as potions redirecting lover’s hearts, a supernatural couple’s fight causing environmental havoc, and an interspecies love interest.

Director Mia Amado, a Junior Theater Major, has done a fine job reimagining the play with some creative choices that work well. Her casting is among those choices and to look at the issues of love in a novel way, she cast Lysander as a woman changing the character to Lysandra, played beautifully by Emily Berry. The mischievous faerie, Puck, is played by the hilarious and flexible Nate McGraw, who also plays Philostrate. Also playing multiple parts terrifically are Jeffrey Trent as Oberon and Theseus, and Ashley Promisel as Titania and Hyppolita. There are too many characters to list all the wonderful actors, but Sam Dunn as Bottom, who is a divine ass, gave one of the standout performances, especially fun when transformed into a beast. 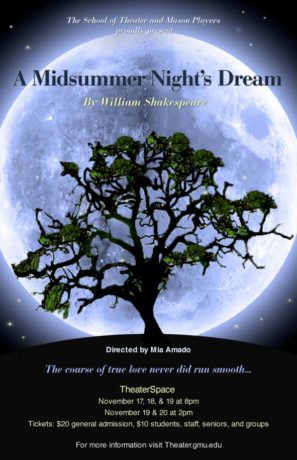 It is an incredibly versatile play offering endless interpretation, and all the design choices of Mason’s production seem to support the story well. The only permanent set piece was a flowering tree, bedecked with faerie lights. Other pieces were brought on and moved as needed by a delightful giggling gaggle of Titania’s faeries. I loved the use of these four characters; humming, singing, dancing, and eavesdropping on their faerie queen, when they weren’t moving bowers, stumps, and bridges to nowhere.

The lighting design by Elizabeth Wetter shifted the mood from a joyous romantic gathering to a dark and dangerous woods in the blink of…well, a light. Joel Vazquez-Amaral designed sound with musical underscoring and background woods sounds that appropriately set the mood but never over-powered the actor’s voices. Kudos to vocal coach, Elizabeth Alman, who helped every actor be heard with clarity and meaning. The pain in the voices of all of the young lovers was clear when scorned and joyous in shared love. The comic crew of rough workmen attempting a play for the Duke’s nuptials brought mirth with their contrived character voices, as well as the physicality of unintentional overacting.

Director Amado, who in full disclosure is a former student of mine, made careful cuts in the script, which don’t take away from the play’s meaning but reduce the length for the comfort of the audience. The production moves quickly and the diversely-aged audience all were captured for its span. It’s well worth your time, and I recommend it to you heartily.

Running Time: Two hours and 20 minutes, with one 15-minute intermission.

A Midsummer Night’s Dream plays through November 19, 2016,  at George Mason University’s Center for the Arts’ TheaterSpace – 4373 Mason Pond Drive, in Fairfax, VA. Tickets can be purchased at the door, or online.