So says the leading character in the opening moments of Found, an offbeat comic musical that puts as much emphasis on the written word as on the spoken (or sung) word.

Found was inspired by the story of Davy Rothbart, who, over a dozen years ago, started collecting odd, funny notes and scraps of paper he and his friends discovered and began publishing them in his own magazine (called, naturally, Found Magazine). 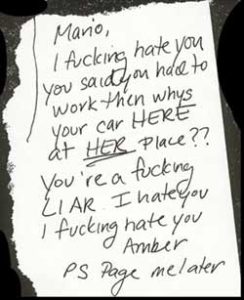 Some of the notes are short (one reads simply “Are you sure?”); some are longer (“We all need an enemy to define who we are. Thank you for being mine. I hate you very much.”); some are miniature essays. Where did the notes come from? Who wrote them, and what inspired them? We can’t be sure – and that’s part of what makes them fascinating. They allow ample room for speculation about the notes’ origins, and about human nature.

The musical Found traces a fictionalized, twenty-something Davy as he establishes the magazine (with the help of his roommates Mikey D. and Denise) and tries to make it work. Soon Davy’s dreams of success are being sidetracked by financial and romantic demands. Should he reach for Hollywood success and turn the magazine into a TV show, even if it alienates him from his friends? And should he pursue a romance with the intriguing, hard-to-satisfy Denise, or with the cheerful TV producer Becka?

Neither of these plot threads generate much excitement. They end up pretty much the way you figure they will. And that’s a crucial problem with Found: nothing seems at stake. The book by Hunter Bell and Lee Overtree (created in collaboration with the education and media organization Story Pirates), however, does create some appealing characters.

There’s something that will keep your interest: those notes. As the story progresses, the notes (all real, and all taken from the magazine) appear projected on the rear wall – sometimes read by cast members, sometimes acted out or sung by them. Sometimes these notes comment on the plot, but other times they offer a respite from the plot.

And they’ve been musicalized effectively by Eli Bolin, who wrote the music and additional lyrics. Bolin shows dexterity at a number of different styles, from country to hip-hop to traditional theatrical balladry.

But some of these songs drift so far away from the plot that they peter out. “Meld Together,” an ornately staged, techno-style sci-fi parody, comes out of nowhere – then disappears in less than two minutes. A juvenile skit about a high school production of Johnny Tremain goes on a lot longer than that, unfortunately.

The best numbers are a lot of fun. “Denim & Diamonds,” a honky-tonk number about a bar pickup gone awry, gets a stellar performance by Sandy Rustin. “Old Country Buffet” is the unlikely title for a dynamic soul number, delivered with drive by Christina Anthony. And “What You Want” is a Kander and Ebb pastiche that showcases Connor Gallagher’s loose-limbed Fosse-like choreography, Theresa Squire’s witty costumes, and an eccentric performance by Molly Pope, who comes off like a blonde Liza Minnelli.

Co-author Overtree directed, giving ample time to everyone in the vastly talented and animated cast. F. Michael Haynie is an amiable slacker as Davy, while Alysha Desloreieux, as Denise, shows off her strong voice on several numbers. (Her performance of “Stupid Love,” with its sudden modulations and tempo shifts, is particularly impressive.)

Erika Henningsen is appealing as Becka, sharing a nice ballad with Haynie, “Looking for Love.” Juwan Crawley has little to do as Mikey D., but he does get one number to show off his startlingly beautiful falsetto. There’s also strong work by Orville Mendoza and Andrew Call, who share time with Haynie on the boy-band parody “Pi Shop.”

The cast performs on a platform raised several feet above the stage; David Korins’ set design is dotted with holes that the seven talented band members (led by Music Director Matt Castle) perform in. A wraparound wall in the rear provides space for Darrel Maloney’s projections.

A note from me: Found is an audience favorite and tickets to the show to see this wonderful cast would make a nice holiday gift.

Found plays through December 11, 2016 at Philadelphia Theatre Company, performing at the Suzanne Roberts Theatre – Broad and Lombard Streets, in Philadelphia, PA. For tickets, call the box office at (215) 985-0420, or purchase them online.