This production of Seussical, at the Children’s Theatre of Annapolis, brings the fun, whimsical world of Dr. Seuss to life. With music by Stephen Flaherty and lyrics by Lynn Ahrens, who both wrote the book, and directed by Brian Mellen, it is a colorful, heartwarming show about the power of imagination and friendship that the whole family can enjoy.

The musical mostly combines the plots of Horton Hears a Who and Horton Hatches the Egg, although the Grinch (Drew Claxton) makes an appearance, along with Thing 1 (Allison Dincau) and Thing 2 (Zach Lijewski). The Cat in the Hat (Shayna Bloom) serves as the narrator, helping to tell the story and comment on the action.

Shayna Bloom is a real hoot at the Cat in the Hat. She walks out of an oversized copy of her book. During a rather sad part, she walks down the aisle crying and blowing her nose in a hankie, which she then gives to an audience member. After the intermission, she finds the conductor wearing her signature hat; she quickly retrieves it. She is also a terrific singer and dancer, helping to lead the musical’s opening number “Oh, The Thinks You Can Think!”

Kaylee Bloom shines as Jo-Jo, who is a Who. She captures how tough being different can be, showing great courage in following her own path. Blooms delivers a heartfelt rendition of “It’s Possible,” singing about the need to dream. Her duet with Dave Martinek, entitled “Alone in the Universe,” is beautifully touching. She does a fun soft-shoe tap with The Cat in the Hat in “Havin’ a Hunch.”

Dave Martinek’s Horton, also shows the quiet resilience of someone determined to do the right thing, whether protecting people living on a ball of fluff, or staying in a tree to protect an egg. His sadness comes through in “Alone in the Universe,” and “How Lucky You Are,” sung when everything seems to be falling apart. Martinek shows his character’s fierce protectiveness in “The People Versus Horton the Elephant,” trumpeting to the jury.

Gertrude McFuzz (Reilly Claxton) is a joy to watch, with her devotion and love for Horton, his only other friend besides Jo-Jo. The audience feels her heartbreak comes through while singing “Notice Me, Horton” – desperately seeking his affection while he’s occupied with the Whos. She sings fondly of the great lengths she’s gone to find Horton in “All for You,” although there is  a little exasperation too. Claxton has has some funny moments, singing about Gertrude’s plain tail in “The One Feather Tail of Miss Gertrude McFuzz”, and exclaiming in “Amayzing Gertrude” when it grows the entire length of the stage. In “Espionage”, looking for Horton, she sneaks up to the stage in the dark, carrying a flashlight. 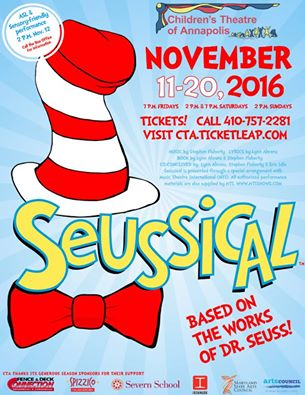 The Wickersham Brothers (Drew Claxton, Matthew Lucente, Connor Page, and Andrew Wilson), a gang of monkeys, delight in making trouble for Horton. They are full of energy, leaping around the stage in “Monkey Business” and “Chasing the Whos,”, and playing keep-away with the fluff ball. They are another source of comedy.

Sour Kangaroo (Claire Hatcher) and Young Kangaroo (Jaida Williams) also have lots of energy. Bright and sassy, they have no patience for Horton, poking fun at him in “Biggest Blame Fool”. They are fun to watch.

Mayzie La Bird (Maddy Sokolowski) is fun-loving and colorful. Her version of “How Lucky You Are” is a sultry number very different from Horton’s. She sings the same tune in “Mayzie in Palm Beach”, although with a hint of boredom. She perfectly captures the selfishness, but she’s so full of life it’s hard to be angry with her.

The costumes by Jill Yamaner and Lynn Doyle-Saffran are inspired. Jo-Jo is visually distinct from the other Whos, wearing a striped shirt and blue shorts. Horton’s costume is clever, all in grey, a dress shirt, pants, and an extra-long tie, like a trunk. Gertrude wears a light blue dress, simple but beautiful. The Wickersham Brothers wear brown jackets and boots, with orange shirts and brown helmets fringed in orange. The Kangaroos have bright purple fringe dresses. Mayzie and the other Bird Girls wear colorful, glittery dresses with lots of fringe. The Cadets are in brown shirts and shorts, with yellow socks and ties. Mr. and Mrs. Mayor (Noah Meaux, Lucy Feldman) wear a green suit and skirt, respectively. Every character is immediately identifiable through their costume, helpful in such a large cast.

Todd Croteau, Deb Furey, and Steve Magnum have done a wonderful job as Set Designers. The set seems to spring out of a Dr. Seuss book, with zany bridges and seemingly impossibly constructed, colorful skyscrapers emerging from the backdrop. Jo-Jo’s bathtub in “It’s Possible” is an oversized contraption with blue confetti coming out of the faucet, and glow-in-the-dark fish float by her onstage. A huge magnifying glass lifts up after “Here on Who” to reveal the Whos’ world. Mr. and Mrs. Mayor read a brochure that, as they open it up, spells exactly what they should do with Jo-Jo.

Musical Director and Conductor Trevor Greenfield do a great job with the beautiful . The songs range from light and cheery, like “Here on Who”, to sweet, sentimental ones like “The Grinch Carved the Roast Beast”, to sad, heartfelt numbers like “Jo-Jo Alone in the Universe.” The actors sing them clearly and make all the emotions fully come through.

Jason Kimmell’s fun and high-energy choreography and Brian Mellen’s excellent direction are first-rate. The actors move around the stage smoothly and naturally, even going into the aisles at times to engage the audience. They fill this production with joy and whimsy, making it a delightful, colorful family-friendly spectacle. Dr. Seuss would be thrilled.