In the summer of 2008 a group of artists, business people and supporters gathered to talk theatre, which led to the formation of Theatre East and an inaugural benefit in July 2009. Its core belief was that that art defines civilization and that “theatre serves as a community experience.” The manifesto concluded that “we believe, as a result of theatre, individuals are allowed the rare opportunity to step out of themselves and feel, think, know… and see as others do.” It goes on to suggest that through this lens, theatre, “we just might embolden the needed yet frighteningly vanishing virtue of empathy.” 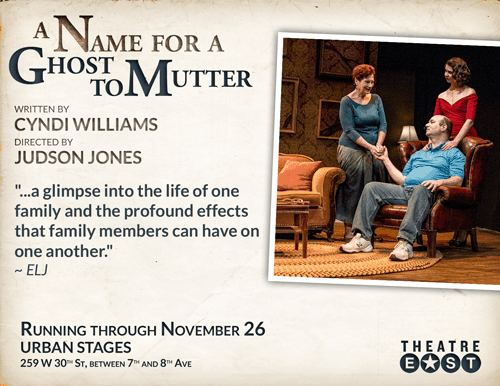 These quotes are just a sampling of the mission Theatre East assigned to itself. The current offering is the first I’ve seen, and it’s a worthy attempt to fulfill the lofty ideals of its constitution.

The play is A Name for a Ghost to Mutter, written by Cyndi Williams. It is directed by Artistic Director Judson Jones, and it is playing a limited run at the Urban Center, a small theatre in midtown Manhattan. A company of nine Equity and non-Equity players has been assembled, and a perfectly worthy production has been mounted. It’s a play about a family, familiar turf certainly, but written by Ms. Williams with an ear for the particular rhythms and attitudes of the small town world which clearly she knows well.

Ms. Williams has enjoyed a thriving career writing plays for the Austin Playhouse and for many other regional venues close by. She’s also an acting company member at that theatre, and this play is her first to leave home to have a shot at the outside world that includes New York.

Horton Foote and Richard Nelson, among others, have written dozens of plays about specific towns; Mr. Foote set them in one of his own creation called Harrison, Texas. Mr. Nelson wrote a trio of plays about the Apple family in Rhinebeck, New York. Now along comes Ms. Williams, attempting to capture the inner workings of a family in a small Oklahoma town, over a period covering the entire twentieth century. It begins in 1999 just after the death of Lala, who is the ghost who will hover as her cousin Lucretia’s three children join their mother in cleaning out Lala’s house. During the course of the 90-minute play, they will discover a secret that will force Lucretia to realize that she is the last of the family who has any memory of what came before, and to discover as well that her children have little interest in the family’s history.

There is a great deal of material to cram into one reasonably short play, and though it covers bits and pieces extracted from dates dotting the entire 20th century, it doesn’t give us opportunity to spend much time with anyone. Short scenes from the past appear and connect certain relatives over the years, but when they are done, there is nothing left but for the actors playing them to simply turn and leave the stage, allowing anyone remaining to go on with the story.

An excellent cast of nine give us glimpses of Lala, her cousin Lucretia, the three younger siblings, and drop-ins from four generations of the deceased. Absorbing, sort of like watching someone work out a puzzle, but never enthralling or memorable. Lucretia and Lala were both orphaned and raised by an aunt, who was not happy with the responsibility. Only Lala managed to escape the second hand life that Lucretia suffered, but Lala’s price was to attach herself to a much older man who offered little more than financial comfort, control, and domination.

The ending (which I won’t give away) is not the most moving or inspirational of endings, though the play has been presented beautifully, with an admirable cast.

A Name for a Ghost to Mutter is playing through November 26, 2016, at Urban Stages – 259 West 30th Street, in New York City. For tickets, buy them at the door or purchase them online.