Everyone’s favorite high-flying nanny has landed at the John W. Engeman Theater at Northport! Mary Poppins will be playing until the wind changes on December 31, 2016. The script, based on both the books by P.L. Travers and the 1964 Disney movie, was written by Julian Fellowes, whose repertoire also includes Downton Abbey. Directed and choreographed by Drew Humphrey, Mary Poppins is sure to delight audiences of all ages.

The endearing storyline of Mary Poppins is a familiar one to most of us. The Banks family requires a nanny for their two rambunctious children, but gets more than they bargained for in Mary Poppins. She proceeds to not only take care of the children, but to fix the entire family. Few, besides the very young, have not heard of the magical flying nanny who can fix any problem with a “Spoonful of Sugar” and a spit-spot!

Intriguingly, the underlying tone of this play is slightly darker than its movie predecessor. The members of the Banks family are here portrayed as realistic people with actual, serious problems. While previously, Jane (Katherine LaFountain) and Michael (Christopher McKenna) were merely attention starved children with an unfortunate penchant for mischief, here they are frequently selfish and rude.

Mr. Banks (David Schmittou) who we all knew as distracted and overworked, is now a truly angry man wounded by the scars of his own childhood. Also is our lovable, if air-headed suffragette, Mrs. Banks (Liz Pearce). In her place is a competent, intelligent woman struggling with her desires to be a caregiver to her own children, and how to best help a husband who doesn’t see what she is capable of. Don’t let this alarm you. What this does is add a substance to the plot that wasn’t there before. If anything, the added solemnity makes for a more heartwarming ending as we see the journey they were on to become a true family, as she sings in the very moving “Being Mrs. Banks.” Not to worry, all of your favorite aspects are still present, dancing penguins included.

And then there is scene-stealer Jane Blass, as the very scary and hilarious Miss Andrew, who wreaks havock as she tries to replace Mary Poppins. Her showstopping “Brimstone and Treacle.”

The cast does marvelously in every aspect. The talented ensemble twirls, taps, and sings their way through number after number with never flagging energy. Analisa Leaming is the perfect Mary Poppins, as we hear from her opening number “Practically Perfect.” Her beautiful voice and on-point characterization are everything you hope for from the iconic flying nanny.

Luke Hawkins makes a charming Bert, and brilliantly performs an impressive tap number during “Step in Time.” David Schmittou and Liz Pearce have a nice chemistry together, portraying believable emotion and giving the audience a couple worth rooting for. Katherine La Fountain and Christopher McKenna both impress as Jane and Michael. They are each fantastic young actors with delightful voices. An added comedic bonus are the household servants Mrs. Brill and Robertson Ay, humorously played by Linda Cameron and Danny Meglio.

The cast are certainly not alone in deserving accolades. With his practical, yet whimsical set design, Jason Simms adds to the fun and magic of the plot.  Likewise, Kurt Alger’s stunning and intricate costume designs continually impress.

The band, under direction from Michael Hopewell, beautifully performed tunes both familiar and new. While each recognizable song was eagerly anticipated, the unknown newer pieces were also very enjoyable. In fact, along with classics from Richard M. Sherman and Robert B. Sherman such as “A Spoonful of Sugar” and “Supercalifragilisticexpialidocious,” come a whole cluster of new songs. Written by George Stiles and Anthony Drewe, the new additions to the score will have you humming all the way home.

With its soaring melodies, enthusiastic dances and ultimate messages of love and perseverance, Mary Poppins is a must see for the whole family.  It reminds us that “anything can happen if you let it.” 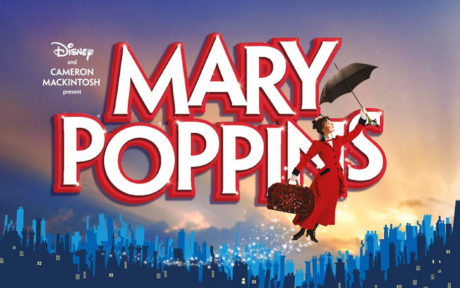