This past weekend, The George Washington University’s Department of Theatre and Dance presented DanceWorks Fall 2016. The program consisted of nine separate dance pieces, each by a different choreographer (most of whom were students) and performed by students. The production was thought-provoking, inspiring, and achingly beautiful, with a variety of themes that touched on personal and social topics, ranging from the importance of a community that works together and the current hot-button issue of sexual harassment and misogyny. 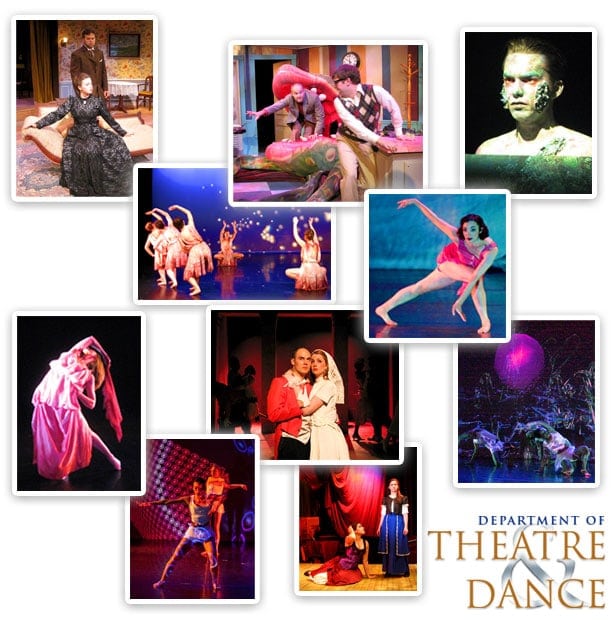 Anthony Gongora was the Concert Director, and Izzy Einsidler designed some spectacular lightening for the program.

The first number was from Choreographer Kira Steven, titled Red String of Fate. Costumes, by Stacey Thomann were cream-colored dresses with flowing skirts that accentuated the dancers as they intertwined and untangled, demonstrating what the program explained with a Chinese proverb:  the thread that “connects those who are destined to meet, regardless of time, place or circumstance”.

Support/Crutch, choreographed by Gabrielle Garruppo, was a more athletic piece with a performance art feel that incorporated two chest high gymnastic bars in the number. The dancers leaned on the bars, on each other, and often collapsed to the floor, seeming to be brought down by the sheer weight of being.

Mary Heath choreographed Find Front, which was described with a quote from John Cage: “There is no such thing as an empty space or an empty time. […] In fact, try as we may to make a silence, we cannot.” The music was a reworking of Metallica’s “The Unforgiven” on cellos by Apocalyplica. The matching intensity of song and movement was gorgeous to watch.

Each of the dances were very similar in style and emotion, but Table for Five, choreographed by Emily Yula, really stood out with the fantastic use of chairs, which the dancers danced with and on, drug across the floor, and carried to different formations, beginning and ending with a circle around an unseen table. W.S. Gilbert is quoted in the program saying, “It isn’t so much what’s on the table that matters, as what’s on the chairs”, and the piece did an incredible job bringing this sentiment, of individuality and the necessity of human connection, to life.

48.8049°N, 2.1201°E, by choreographer Linda Ryan, started off the second act and was another number that carried a performance art vibe.  There was a sense of rule and oppression throughout and the performers would speak, often repeating the same line, “And, if you think you’re getting somewhere”. The program listed a Louis XIV quote, “On va voir,” meaning “we will see.”

Melanie Eccles choreographed Endure.  Costume Designers, Stacy Thomann and Jessica McElravy, had the dancers in leotards, each with one of their limbs wrapped in a similar cloth. A leg. An arm. The effect was striking and emphasized the controlled and stretched sensation of the choreography, performed by Maggie Bryant, Kate Cooper, Morgan Furnari, Annie Mancuso, and Emily Yula. Accompanied by a Maya Angelo quote, which read, “But still, like air, I’ll rise” the dance conveyed the strength, desperation, and determination to endure, as the title implied.

Lekker, my personal favorite from the show, was choreographed by Rachel Sharp. Fantastic performances by Alyssa Bovitz and Rachel Sharp drove home the theme of sexism, using large frames to highlight the constant objectification of women. This was another number that resonated as performance art and carried the resentment and disgust many women feel living in our patriarchal society.

The final piece of the evening, called Communis, was by guest artist, Vladimir Conde Reche. The choreography was fantastically fluid and a perfect finish to an evening full of varied contemporary dances. Reche exemplified the overarching subject of the program, which was highlighting the value of coming together as a people and working toward a common goal.

George Washington University is clearly doing many things right in their Department of Theatre and Dance. Each of the students, who performed or had some form of their work featured in DanceWorks Fall 2016, succeeded in creating a tremendous production. I will not pretend that I was always clear on what the intended message or theme for each of the performances was, but that did not in any way keep me from being able to appreciate the skill and dedication if took to create and execute the intricate, interwoven movement.