Every city has a Clybourne Park. “It starts one house at a time,” as one of the characters states. In act one (1959) it is a neighborhood that will soon have its first “colored” family moving in. Act two (2009) finds the same house in the same neighborhood, which is now entirely black, subject to new white gentrification. Bruce Norris’ play is given a hilarious production with a sharp satiric edge at The Stagecrafters Theater.

Remember A Raisin in the Sun by Lorraine Hansberry? Did you even wonder what happened to Karl Lindner the Swedish twerp who unsuccessfully tried to bribe the Younger family so his neighborhood could remain pure? Well, he’s back in his home suburb of Clybourne Park, now trying to get his neighbors to cancel the sale. The family is a typical group of depthless white people who assume their “Negro” servants are invisible. Attitudes have changed 50 years later. The African Americans are now very noticeable, while the so-called liberal whites are drowning in patronizing insensitivity.

Patricia Masarachia’s two story set of unpainted wood conveys the dilapidated condition of the 2009 house, but is less successful with the newer 1959 house. Gilbert Todd’s simple lighting is excellent, while Joan Blake’s costumes colorfully illustrate the differences that 50 years can make. They score extra points for making Karl seem to be from 1910.

The cast assembled by Director Catherine Pappas is outstanding. They appear in both plays and are totally different in each one.

Patrick Cathcart is as unctuous as Hansberry wrote Karl Lindler, and uproarious as a white yuppie who continually puts his foot in his mouth.

Neena Boyle plays the pregnant wife in both plays and demonstrates flair and superb comic timing.

As the black characters fighting for equality, Sara Osi Scott and Timothy Richardson bring fierce dignity to their characters.

Who knew Clybourne Park could be this funny? 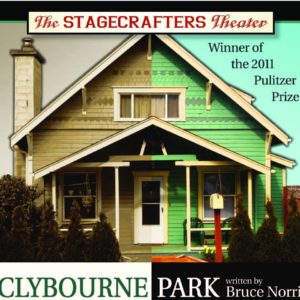