Julie: Please tell our readers where they may have seen you appear on our local stages and roles you have played.

I’ve been doing community theater with some regularity since 2007. I was recently in Zemfira Stage’s summer production of The Wizard of Oz.  I was in the ensemble, my husband was the Tinman, and our daughter was the violinist in the pit. This past spring I was in Castaways Repertory Theatre’s The Music Man. I was one of the male voices in the school board quartet along with my husband, AND our daughter was a violinist in the pit!  As you can tell, we try to do shows together. In fact, my husband plays one of the firemen in a couple of performances of this show and our daughter is involved with the post-show. A family that performs together stays together! On a fun note, my daughter (who is 14 years-old now) played one of the Baby Angels when Liz first directed this show with the Sterling Playmakers in 2008!

What is the play about from the point of view of your character? Have you enjoyed playing her?

Excluding the opening monologue, Reverend Hopkins appears in only one scene. Her job is to be the voice of reason, the moral compass, though I see her as the spiritual guide for Grace Bradley’s “journey” as director of the Christmas pageant. I think Reverend Hopkins is conflicted with this position. On one hand she wants to be as neutral as possible but she must also do the right thing (do what Jesus would do) and lend support to Grace who is standing alone.On the other hand it is her job to maintain the integrity of the church and appease the devout (and pious) church members who are outraged that the pageant (really, the church) has been invaded by the Herdmans, who are deemed inappropriate outsiders. It’s a delicate balance. I enjoy playing the part. Liz gives me leeway to see what I will do.

If you were granted one wish on Christmas what would it be?

So very Miss America Pageant, but I wish for World Peace – I want everyone’s corner of the sky to be beautiful.

If you were granted one Christmas gift, what would you want?

My own non-profit theater company that embraces Hamiltonesque diversity.

The holidays can be busy and there can be a lot of holiday shows to choose from. Why should people see this holiday production?

Aside from the obvious darling factor of having incredibly-cute children in the cast, it is a family show with wonderful moments. I don’t want to give too much away, but there’s one scene in particular involving the character of Imogene that captures you; it’s one of those realization moments for the characters and for the audience, which makes you glad you’re alive, that you can feel emotion. Gets me each and every time.

How have you enjoyed working with the cast and crew of Providence Players?

Working in a show with both adults and children always creates an interesting dynamic. Adult actors during the rehearsal process want to be able to find their characters honestly and organically while at the same time being cognizant of the fact that there are little ones in the cast. Having to “censor” yourself and control any excited utterances can impede an actor’s flow. But, Liz had the adult actors rehearse together early on and without any children –it was very effective. Then, she brought us all together.

Child actors are natural to begin with but when they’re really good child actors – they’re amazing to work with; they have this ability without hesitation or pretense to pull something MAGICAL out of their hat. The little boy who plays Charlie just blows me away. And Liz, well Liz. This is my third collaboration with her as director and she is laugh-out-loud hysterical. It’s not the words; it’s the delivery. Every moment, every second, there’s a quick response from her while my response is still forming in a bubble over my head.

What do you hope people will take away from seeing the Best Christmas Pageant Ever?

At first glance, we’re different, but if you see it as a wonderful thing first, and open your heart to it, you’ve already made room in your life and there’s room for all of us in the world, especially in a church.

The Herdmans are the worst kids in the history of the world; they lie, steal and cheat. Now they have taken over the churches’ annual Christmas pageant! The entire town has gathered in anticipation, waiting to see the Herdmans ruin Christmas – or will they? This funny, heartwarming, holiday tale has become a classic: and good for the entire family! 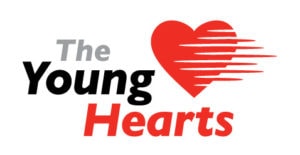 This special production of a holiday treat will benefit the work of Young Hearts Foundation, a group of amazing teens who raise funds to battle blood cancers and other diseases. Directed by WATCH Award-winning director Liz Mykietyn, get in the holiday spirit when the Providence Players brings The Best Christmas Pageant Ever to the James Lee Community Center Theater stage December 9-18, 2016. 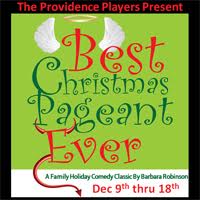 Here Are Performance Dates And Times:

All attendees are invited to a special reception with Santa after the show where refreshments will be available for a donation.