Always on the lookout for provocative theater in improbable places, I went to the one-night-only DC premiere of a politically edgy and surprisingly funny send-up of Yahweh, the God of the Old Testament, at the historic Whittemore House, home of the 94-year-old Woman’s National Democratic Club. 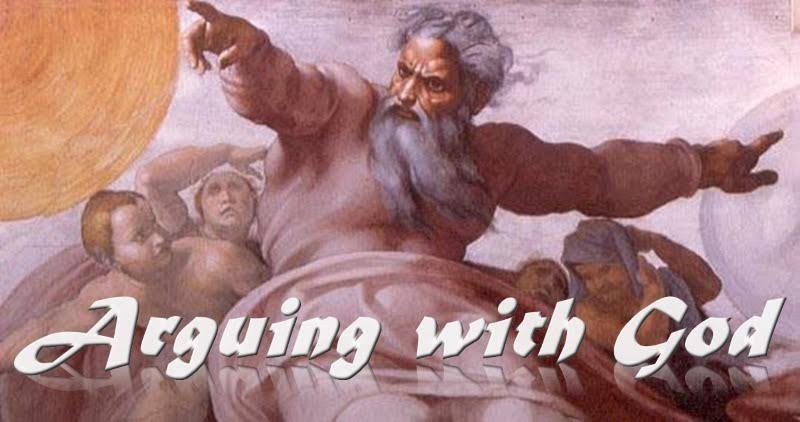 As if that weren’t disconnect enough, the play—John B. Henry’s Arguing with God, directed by Rick Davis—was acted out by a cast of 28 mostly amateur performers wearing ersatz biblical garb in a grand room before notables and club members in fancy cocktail dress.

The tony crowd seemed to find the audacious script and devil-may-care performances thoroughly enjoyable. There were huge laughs at the steady flow of witty quips  (who knew so much SNL-style sketch comedy could be extracted from Scripture?). And by the end of the play, the audience seemed quite caught up in its final moral/philosophical/theological conundrum: the intractable tension between top-down power and the injustice that unchecked power metes out to those on the bottom. I sensed in the room a level of engagement with actual ideas and consequential questions that would be the envy of many a more polished theatrical troupe.

Perhaps it was because the play’s portrayal of Yahwah—as a belligerent, vindictive, and peevish bully with a proclivity for smiting people  (a not erroneous reading of His character in the Bible)—bore an uncanny resemblance to the personality of this nation’s president-elect. I cannot say for sure, and this conjecture is solely my own. But the script certainly contained some telling tipoffs—like a joke about Tic Tacs.

The first scene cracked me up. Yahweh, wearing a dark robe and a silly headdress with little sparkly lights, stands on a platform in front of a throne. A chorus of women in thrift-chic gowns boogies in singing “You’re So Vain,” and they point their fingers at Yahwah accusingly/tauntingly in time with the lyrics (“You’re so vain. You probably think this song is about you”). Turns out, the women have Yahweh’s number—and it is the women in Henry’s play who will consistently stand up to Yahweh’s obsessed powermongering.

The play takes as its structure several biblical episodes that it calls Yahweh’s “failed experiments” in picking “chosen people.” The first takes place in Eden, where we meet a very uppity Eve and a somewhat doofus Adam. Eve, not happy about having  come second-class from Adam’s rib, mouths off at Yahweh, which Yahweh did not intend for women to do. They are of course purged for disobeying Yahweh’s stricture about the apple.

There’s a subsequent episode about Noah and his wife, here named Joan. When Yahweh tries the chosen people thing again by putting Noah and family afloat in a boat, Joan is nauseated by Yahweh’s mass drowning of innocent people—and Yahweh’s demanding expectations again run aground.

Later scenes involve Abraham and Sarah, and David and Bathsheba (whose rape by David the play does not skirt). Throughout Henry’s play it is the women who take their stand on the side of justice but are run roughshod over (“god smacked”) by Yahweh and His men-ions.

Henry’s writing is sharp and smart, pithy and epigrammatic—well nigh Wildean, actually—and it makes for delightful listening. Here, for example, is an exchange between Yahweh and Abraham. (An amusing sound effect like electrocution and a puff of fake smoke punctuated Yahweh’s rants and rages in the performance I saw.)

GOD: …it’s simple: You give me OBEDIENCE, I give you unheard-of POWER.
ABRAHAM: That’s a great trade. We’ll live forever by the sword.
GOD: Forget soft power. I prefer shock and awe. Rule by fear.
ABRAHAM: Is there anything more I have to do?
GOD: Yes, the sons of Israel can’t marry the daughters of
unchosen people.
ABRAHAM: Why not?
GOD: I wasn’t born yesterday. I’ve learned my lesson with Eve.
Females charm their husbands. Before long chosen men will worship the gods of their women rather than ME.
ABRAHAM: I won’t quarrel with that.
GOD: Every son shall be circumcised on his eighth day.
ABRAHAM: Boy—that certainly will make us exceptional. We’ll
have lots of skin in the game.
GOD: OBEY or be cut off from Israel. Take his foreskin NOW!
CHIEF CIRCUMCISER: This won’t take long with my sharp knife. Dammit, hold still.
[The Circumciser-in-Chief takes a blade to Abraham’s groin.]
SARAH: (enters quickly) Please be careful. I’m his wife! And he has a lot more sowing to do

Henry’s script is available online for download. I suspect it reads cold very much as satisfyingly and thought-provokingly as it played at a fast clip in the humble enactment I enjoyed the other night.

Running Time: About 65 minutes, with no intermission.

Magic Time!: ‘Republic For Which We Stand’ at United States Capitol Visitor Center by John Stoltenberg