LiveConnection Presents’ evening of Sybarite5 + Jakub Ciupinski treated its World Cafe audience to two exciting young exemplars of new music.  Sybarite5 is a string quintet that is rapidly gaining critical acclaim. The addition of a double bass (Louis Levitt) extends the expressive power of the quartet structure (the rest of the group is: Sami Merdinian and Sarah Whitney alternating between first and second violins, Angela Pickett on viola, and Laura Metcalf on cello). 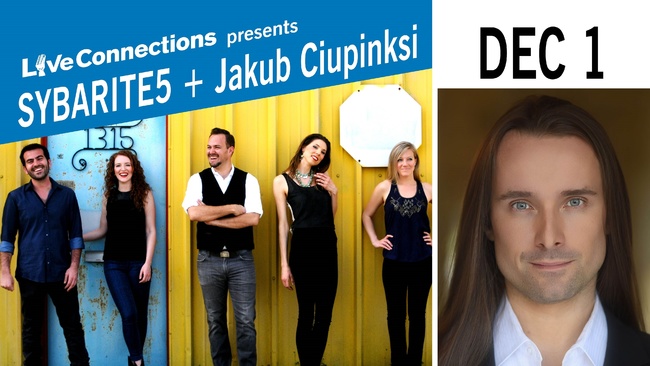 Ciupinski is a young Polish composer living in New York whose work often, as in this performance, combines standard chamber music instruments with Ciupinski performing on “hacked” theremins, an extension of the quintessential “space age” electronic instrument. Credit for the evening must be given to curator Mary Wheelock Javian. “Curation” has become a cant phrase recently, but it was meaning here: Javian paired Sybarite5 and Ciupinski for the premiere of his “Three Canons,” a work that marries their talents.

In terms of repertoire, Sybarite5 follows the tradition begun by the Kronos Quartet of performing arrangements of rock and pop music as well as more traditional chamber work. Because there are very few string quintets, Sybarite5 needs to generate their entire repertoire, commissioning compositions and arrangements for themselves. Everything played at World Cafe was beautiful. Their pre-intermission set included two Radiohead arrangements, an exquisite tango nuevo by the late Argentine master Astor Piazzola, an Armenian folk song, an arrangement for quintet by the jazz bassist Sean Conley, and original works by Kenji Bunch and Brandon Ridenour.

Following intermission, they performed Dan Visconti’s “Black Bend,” before Ciupinski came onstage for two solo pieces. All were performed with virtuosity and passion, frequently using the instruments in unconventional fashion – as percussive instruments at the beginning of the Bunch composition, “Allemande pour Tout le Monde,” or a visually and rhythmically surprising baseline for Conley’s “Yann’s Flight.”

Jakub Ciupinski credits his development of “hacked” theremins as a way to include more social interaction in the performance of electronic music. The theremin (and the related ondes martinot, beloved by Messiaen) is always fascinating to watch: the performer doesn’t touch the instrument: instead two bars protruding from a box pick up the movement of the performer’s hands via radio waves and translates this into pitch and volume. Ciupinski pairs two theremins and programs them from a laptop, allowing him to create a much wider range of sounds and effects, and greater nuance from hand and finger movements. The result in performance seems almost magical (Watch at approximately 35:00 here for a taste:

Ciupinski’s “Three Canons,” which ended the evening, combined the strengths of the performers. “Canon I” focused mostly on Sybarite5’s playing, with Ciupinski providing a ground below the overlapping melodic lines. “Canon II” and “Canon III” saw increasing interplay between the acoustic instruments and Ciupinski’s electronica, almost as exciting visually as it was musically.

Any fan of new music should make a point of seeing these artists the next time they come here.