In the opening moments of Seuls, Wajdi Mouawad takes to the stage wearing only black briefs and eyeglasses. The purpose of the show we’re about to see, he informs the audience, is to examine “our ability to live together and put up with our differences.” He also says he seeks to answer some big philosophical questions, such as “Who are we? And who do we think we are?”

Mouawad has had an illustrious career as a director and playwright, primarily in Quebec and France. (Earlier this year he was named director of La Colline, the national theatre in Paris.) Seuls is performed in French, with a few brief asides in Arabic (reflecting Mouawad’s Lebanese roots) and English. But don’t let the language barrier scare you off; he generally speaks at a moderate pace, and easy-to-follow English supertitles are projected above the stage.

In Seuls, which premiered in France in 2008, Mouawad plays Harwan, a 35-year-old graduate student at a crossroads in his life. He’s trying to finish a 1,500-page thesis about his idol, the Canadian actor/director Robert Lepage. But he admits early on that “I don’t have a conclusion for my thesis.” His efforts at interviewing Lepage are repeatedly stymied. Harwan also has a strained relationship with his sister, and his recent breakup with a girlfriend has left him dejected. He has no one he can turn to for comfort.

Mouawad delivers most of his early speeches with a solemn, dour face, but video projections on the wall behind him reveal what’s really on his mind. At one point, as Harwan lies sleeping in bed, he is repeatedly attacked by a projected version of himself, as Harwan’s suicidal dreams are acted out for us. Dominique Daviet’s projections are astonishingly inventive.

But as spellbinding as this is to watch, it’s all rather depressing. It becomes even more so when Harwan’s father takes ill, forcing him to deal with decades of unresolved mistreatment and neglect. As his father lies comatose, Harwan unleashes a torrent of invective at him. It’s a compelling scene, with Mouawad’s expressive acting running through a range of emotions – but the scene goes on so long that it eventually squanders much of its power.

Seuls reaches a climax in a startling, largely wordless sequence that takes up the last half hour or so of the show. It would be unfair to reveal what happens, except to say that it begins with Harwan suffering a mental breakdown. It’s a bold, original display, but it’s also self-indulgent, with Mouawad giving in to a series of bizarre, self-destructive impulses.

And it’s very difficult to watch.

The sequence, unfortunately, doesn’t bring Harwan’s story to any type of conclusion; those big questions he asks at the beginning of the show never really get answered. And despite this, Seuls is filled with impressive work by Mouawad and others. I left Seuls as a great admirer of Wajdi Mouawad, an artist who is willing to take big chances onstage. And I look forward to my next opportunity to see him perform. 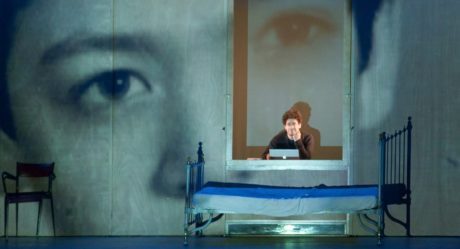