The Players Club of Swarthmore’s new production of Mary Poppins may surprise some devoted fans of the movie. This stage adaptation, which had a successful run on Broadway a decade ago, isn’t a slavish imitation of the classic Disney movie; considering the movie’s animated sequences, that would be quite hard to pull off. The stage version, in a move that was apparently made to satisfy the estate of Poppins’ creator (author P.L. Travers), includes changes to the plot and to the score. Some changes work better than others.

But it all ends up going down, as one of the songs puts it, in a most delightful way.

A few of the P.L. Travers’ songs from the film have been eliminated—there’s no Uncle Albert and no “I Love to Laugh”—but most of the better-known songs remain. A series of new songs by British songwriters George Stiles and Anthony Drewe have been added, and while they’re not consistently up to the Shermans’ level of quality, most of them fit into the plot smoothly. (However, “Playing the Game,” a song in which children get reprimanded for mistreating their toys, is downright bizarre.)

Director Brian Walsh’s production is much less elaborate than the movie, of course. Some of the show’s elements, like Tara Hewlett’s rich array of costumes, give the show an elegant touch. Tim Bruno’s austere set design, though impressive, is very ‘dark’.

Walsh’s production is at its best when it focuses on its two stars, Bridget Thompson and Neil Kirschling. Thompson has a strong soprano and a strong personality, two prerequisites for playing Poppins. She gives the role of the “Practically Perfect” nanny the right blend of cheerfulness, sternness and arrogance. She even pulled off a funny ad-lib when a prop failed to work properly.

Kirschling is a good foil for her as the happy-go-lucky chimney sweep Bert. His rubber-limbed dancing is well-suited to the choreography by Emily Fishman and Katie Sienkiewicz. And he pulls off a mid-air somersault quite well. (Mary isn’t the only one who gets to fly through the air in this show!)

Leah Sucharski gives a nice touch of compassion to the role of the neglected wife Winifred Banks, opposite Eric Thompson as her troubled husband. (Zoe Hunchack and Will Rubin play their children, alternating with Ella Grossman and Sam Gorman.) Doris Chan plays the Bird Woman, singing a poignant version of “Feed the Birds.”

And Kat Lemon is a lot of fun as a nasty nanny named Miss Andrews, who emerges as Mary’s rival.

That lady with the umbrella has flown into Delaware County… and the folks there should be glad. 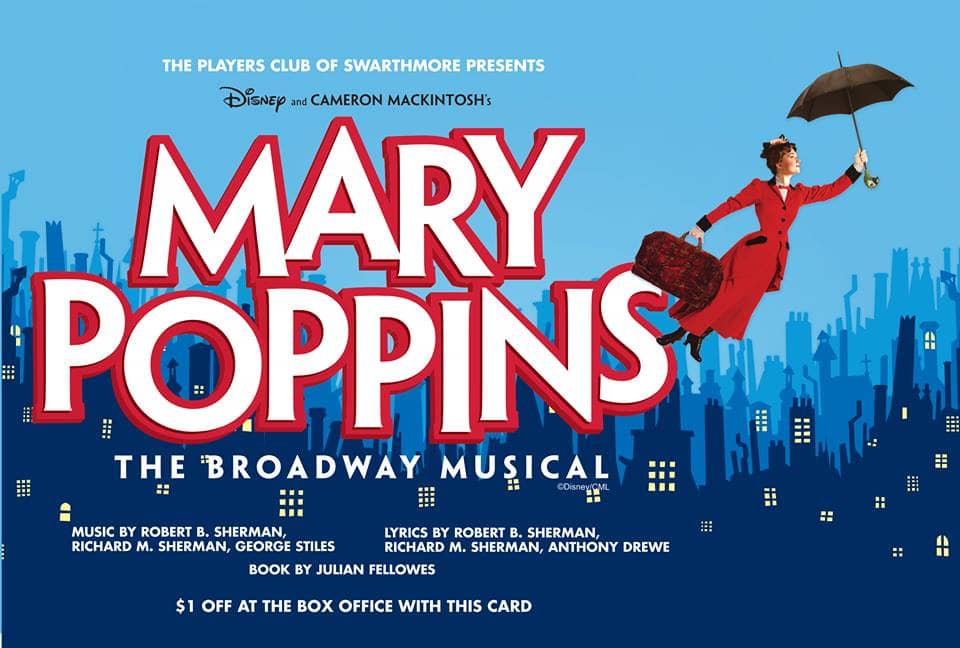