‘Tis the season for holiday cheer, laughter and heart-warming music, and there is no better place to find it all wrapped up together than at the NSO Pops’ A Holiday Pops! concert. The first performance of their holiday concert series this year is titled Home for the Holidays, a special one-night performance for local service men and women and their families yesterday evening at the Kennedy Center Concert Hall. The classic holiday program adds a touching note of homage to our nation’s military, tailored to honoring the special guests of the audience.

Holidays Pops with the NSO is always an evening well spent, full of the festiveness, joy, jaunt, and pomp that the NSO Pops and its spirited conductor Steven Reineke imbue. But most of the excitement is the innovation that goes into the program, whose selections are handpicked by Maestro Reineke and at least half of which are arranged by him for the NSO especially. It is a truly unique holiday program not to be found anywhere else, and it is always a delight to hear the combination of precise musicianship performing arrangements tailored to its particular talents.

Joining them for this special holiday series are guest singers Laura Osnes and Santino Fontana, along with the ever-loved Washington Chorus and its music director Julian Wachner. Osnes and Fontana are of Broadway fame, a duo whose easy charm and rapport reflects their joint starring role as Cinderella and her Prince in Rodgers & Hammerstein’s Cinderella which garnered them each a Tony Award Nomination for Best Actress and Actor in a Musical, respectively. Osnes is also well known for her starring roles in Grease, Anything Goes, South Pacific, and Bonnie and Clyde, while Fontana can be found as the charming, but ultimately villainous Prince Hans in that little-known Disney movie, Frozen.

The Chorus and NSO ring in the evening with a rousing “The Most Wonderful Time of the Year” as the stage shimmers with Christmas trees and twinkling wintry snowflakes.

Santino Fontana follows this introduction with a peculiar, but snappy little song titled “Glow Worm” and an articulately beautiful rendition of the classic “Silver Bells”, which perfectly highlights his voice’s depth of range.

Laura Osnes takes a more soulful approach to the night with intimate solos, giving credence to the inward-focused messages of these slightly more obscure holiday songs. “I Wonder as I Wander” and “The Secret of Christmas” give a personal touch to the depth of feeling inspired by the holiday season, but it is “Yes, Virginia (There is a Santa Clause)” that is truly heartwarming in its reassurance of the living Christmas spirit.

The duo pair up on several fan favorites of the evening, including the popular back-and-forth “Love is an Open Door” from Frozen. They are joined by the Washington Chorus on several sing-along medleys of holiday favorites, an amalgamation of all our favorite holiday tunes including “All I Want for Christmas is You”, “Feliz Navidad,” “Rudolph the Red Nosed Reindeer,” and, of course, “Jingle Bells.”

Heartwarming the evening may have been, but there is plenty of cheer and fun to be had. Local Helen Hayes Award-winning actor Joe Isenberg settles himself into a plush red armchair to read us all the bedtime poem, “’Twas The Night Before Christmas” in a dramatic retelling. Even the famous big guy, Santa himself, makes an appearance as a brief guest conductor!

Finally, the program includes touching tributes to the theme of the evening, with the NSO leading the rousing Armed Forces Medley to recognize each individual branch of the military and a clever mash-up titled “Stars and Stripes for Christmas” whose instrumental motifs had the audience laughing in their seats. Fontana again took center stage to a hallowed version of “I’ll Be Home for Christmas,” the classic war-time Christmas song, appropriately dedicated to the military members unable to return home this holiday season.

This is the first performance of Home for the Holidays, and we can definitively say it is a perfect new addition to the NSO Pop’s traditional holiday concert lineup. What a wonderful way to honor many of those who serve in the greater Washington DC area during our favorite time of year through the joy of sharing music. A Holiday Pops! is truly a holiday tradition share and be shared. 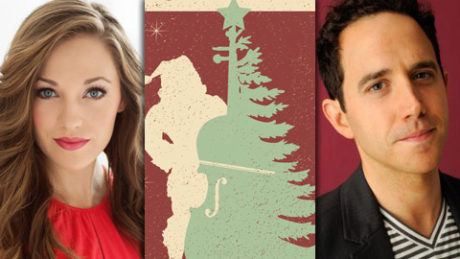