Review: ‘The Carols’ at 1812 Productions

Close harmony, the singing style popularized in World War II by the Andrews Sisters, is formidably difficult to do well. Did you ever wonder why great close harmony teams frequently had the name “brothers” or “sisters” attached? You literally had to be a close knit family to continually rehearse the difficult intervals.

The three sisters that make up The Carols can do effortless close harmony. They throw it off with ease, instantly conjuring that era of separation, ration coupons and Spam. This new play by Jennifer Childs, Producing Artistic Director of 1812 Productions (The All Comedy Theater Company), doesn’t have much story but it has heartfelt period charm to spare. 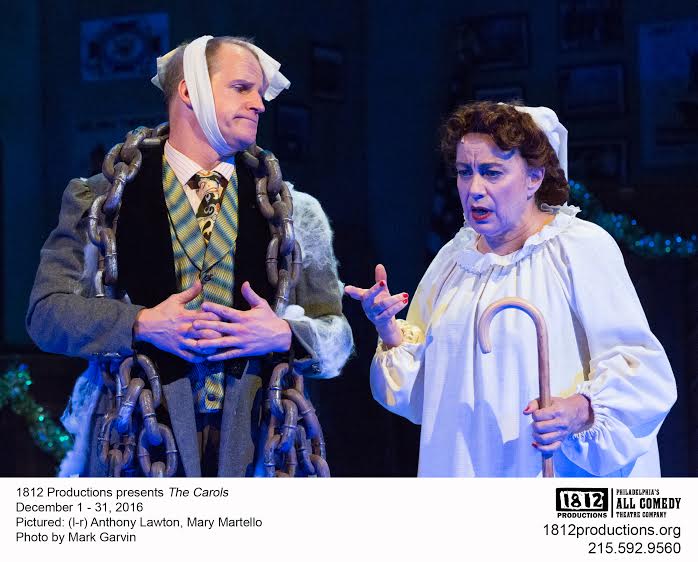 The run-down setting (by Lance Kniskern) is a room in an old VFW in the tiny New Jersey town of Picatinny. The three sisters are planning the annual production of A Christmas Carol, but with all the men away at war, the production will now feature an all-female cast. How can they convince Betty, their boss, to portray Scrooge, especially when she embodies all the “Bah Humbug” aspects of that famous cynic? This isn’t much to build a perceptive entertainment on, especially since the entire second act consists of the predictably disastrous performance.

The cast is game, especially Mary Martello as Betty/Scrooge. She has a strong stage presence, a great singing voice and the undoubted ability to play Scrooge in the original should someone have that excellent idea. The three sisters (Emily Kleimo, Rachel Camp, and Caroline Dooner – all terrific singers) have defining characteristics: one wants to get out of the town, one wants to find a guy, and the other just wants to stay put. They are well differentiated, but The Carols has too many goals to make them engaging characters. Childs seems to be trying for a sentimental comedy in the manner of William Saroyan, but The Carols lacks the complex plot of The Human Comedy, or the unforgettably unique denizens of The Time of Your Life.

The characterizations are further diminished by the introduction of a good deal of burlesque/vaudeville comedy. Enter Mel Shaatz, the only male to audition for the play. This visitor to town is Jewish, an unknown commodity in Pikatinny. This poor guy, played with great enjoyment by Anthony Lawton, has spent his entire life haunting burlesque houses and stealing their jokes. (For example, a girl enters dressed as a wrapped package: “I’m the ghost of Christmas present.”)

Mel is a fountain of ancient humor that permeates the entire play. This comedy mixes uncomfortably with the play’s often-honest sentimentality. And yes, Scrooge and Marley actually steal most of Abbott and Costello’s “Who’s on First?” (Watch it here.)

Childs and her crew have obviously done their historical research. Long quotations from local news sources dominate the dialogue when the sisters might be revealing themselves. Janus Stefanowicz did the costumes (hardship in the first act, red white and blue glitz in the second), while Karen Getz accurately choreographs the dances of the era. Drew Billiau has designed excellent musical theatre lighting. 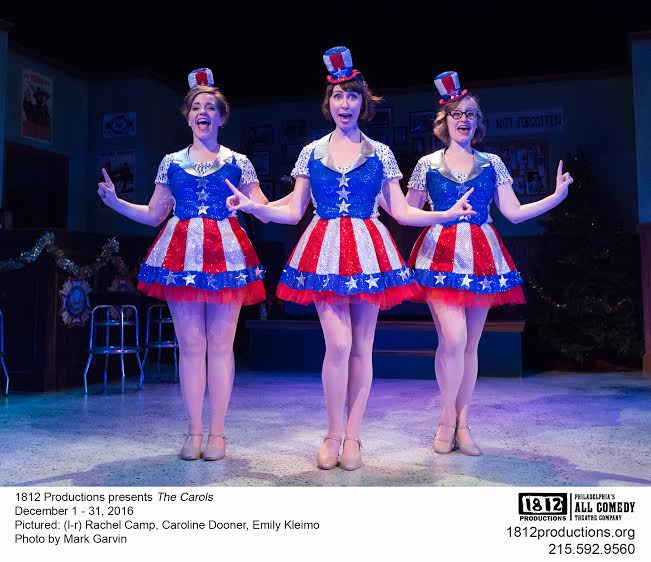 Composer Monica Stephenson has done her homework as well. The potpourri score is dead-on accurate, although the music rarely seems like an expression of character. Still, much humor is derived from Scrooge and Marley dancing to the sisters’ three-part harmony..

Childs’ lyrics have problems as well, especially in the comedy songs.  There is a song about the difference between WASP and Jewish slang, “What is Buzzin’ Cousin,” that works its one joke into the ground. “I Say Humbug” enumerates the customs we hate about Christmas without building to a final punchline, while a totally superfluous wartime patriotic number rhymes paparazzi with Nazi. The audience liked the ballad “Let Me Down Easy,” but it failed to achieve the desired impact following 20 minutes of burlesque.

The Carols has a number of touching sister-love moments and an obvious affection for the era. It doesn’t live up to its potential, but hopefully that affection will pay off with future revisions. Paraphrasing Sondheim/Seurat, there are “so many infinite possibilities.”