Love conquers all. The common saying sounds like an easy feat, yet the journey of finding, keeping or cultivating love is fraught with tensions and discontinuities. This is also the case in At Sea, Staring Up by Finegan Kruckemeyer. Exploring different strands of stories, told as vignettes that jump from one story to another, they are all bound by the themes of love. 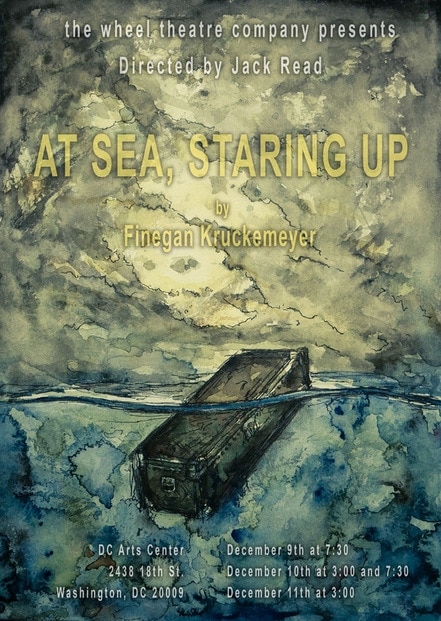 With five main characters, the narrative allows for a free flow of stories with five main distinct characters driving the action: Emma the Greek –wonderfully played by Elizabeth Floyd–, focuses on a character driven by familial love; trying to save her father. There is also Noah Kierney, brought to life by Adrian Iglesias, who loves his wife so deeply he cannot bear to let go of her though she is not alive any longer. Elise Dabelstein has so much love her love multiplies; love for her first baby, her good husband and a man who makes her feel alive. There is also a fun character, the goodhearted Caleb Prosser –played by Nick Duckworth–, who will risk his own life to be with the one his heart desires. Finally, there is a magical character, one that can jump through space and time, the orphan Sylvia Wist. Elizabeth Ung plays Sylvia, and makes us believe that there are really no boundaries that can stop love.

The play opens to a small set at the DC Arts Center. It is a bare bones black set in a very intimate setting, with sparse lighting and mostly a few elements used as backdrop. The entire focus of the play is on the acting. The five actors are always on stage and while they have a few props to help the play move along; the narrative relies mostly on them. A quintet of fresh, young faces that are so committed to their craft and this play, they take us through some sad moments, love making and even a few laughs. Nick Duckworth as Caleb delivers a relatable and funny portrayal of a misfit who cannot find his place but realizes himself in helping others. He does so by delivering a moving yet very funny moments. The audience was taken by him, as he turned around the mood in the room from somber or sad to light and airy.

Another standout performance was delivered by Elizabeth Ung, who brought physicality unto the stage to portray the magic within Sylvia Wist. As she violently twirled on the small stage, she kept the pace of the play from slacking, moving through space and time.

The cast was thrilled to bring this production, originally from Australia. A head of the play Director Jack Read addressed the audience, explaining this marked the first time the play was shown in America, in DC and indeed, the first time his company, The Wheel Theatre, ever performed in front of an audience. It was a special night filled with many firsts that deserves repeating.

At Sea, Staring Up is like a quilt of interwoven stories of characters that are in search for love or have lost it. This is not an overly sentimental rendition of what that could mean; rather, it deals with the complexities of love itself. There something in there for the hopeless romantic and the jaded. I leave it up to you to make the connections and get to the short run of this play.

Running Time: One hour and 50 minutes, with no intermission.