The show started with a video compilation showcasing their success with clips from The Today Show, performances for Presidents Bush and Clinton and images showing them at top of the charts. The video is inspiring as it relates how Manheim Steamroller creator, founder, producer, and Grammy Award winner Chip Davis has sold over 40-million records after being told it was career suicide to perform Christmas music. 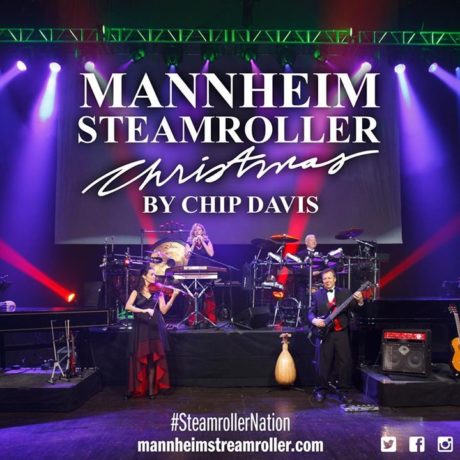 The Red Tour ensemble exhibited immense talent. Drummer Tom Sharpe blew the crowd away with his drumming skills. He doesn’t just bang on the drums, he becomes one with the drums, his enthusiasm and skills are exciting to watch.

Anna Lackaff expertly tackling the harpsichord and synthesizer, playing the lead on “Carol of the Bells.” I enjoyed the “Christmas Lullaby”as it is military themed and was a salute to our military. On “Faeries,” I enjoyed Mark Agnor’s violin playing as well as the bass line. “Toccata” also had some beautiful violin work. I also enjoyed “Greensleeves” which featured Chip Davis’ daughter Elyse Davis.

The piano solos were gorgeous on “O’ Little Town of Bethlehem.”

The company did a great job with added visual effects. Videos complemented all the songs and fake snow falling from the ceiling during “Catching Snowflakes on Your Tongue” caused “oohs” and “aahs” from the audience.

Mannheim Steamroller is a national treasure. They always deliver and their Christmas Show is always breathtakingly joyful!