Brightened by a beautiful glittering garden backdrop, several of Oscar Wilde’s fabled fairy tales, smartly adapted and directed by Jeremy Bloom, convey the childlike spirit to an enchanting world where miracles, magic and mysticism mix with somber morality motifs, and puppets roam and ruminate. Wilde had penned these tales for his children during the Victorian era, and Quintessence Theatre propels them into the 21st century in a traditional, yet modernly relevant and invigorating manner. Sweetened and spiced with David Cope’s amazing musical compositions, and garnished with an adorable children’s chorus, probing lessons of love, labor and sacrifice, selfishness and selflessness are splendidly brought to life under the old art deco archways of the historic Sedgwick Theater.

In one of the most touching of these poignant stories, “The Selfish Giant,” the Giant (Ashton Carter) builds a wall around his garden to keep out merry children. Snow then proceeds to collect her friends Frost, North Wind and Hail within it. Spring with its accompanying chirping birds and lovely flowers seems forever stalled, until one day the children steal inside, bringing Spring along with them. Seeing this brings a thaw to the Giant’s heart, and in reaching out to help a small boy he ultimately finds Paradise.

Other tales possess far bleaker outcomes such as “The Devoted Friend,” in which Hugh the Miller (Michael Gamache) talks a good game about friendship but delivers considerably little. The miller takes advantage of his friendship with Little Hans (Mattie Hawkinson), having his self-sacrificing young friend run around doing favors for the love of him until there is literally nothing left of Hans to take advantage of anymore, leaving the miller bereft of friend, and helper. The moral of the story seems to be that both behaviors, in the extreme, are detrimental, but there other depths between the lines left to discover.

It is a joy to see the many ways in which Martina Plag’s puppetry is applied in Wilde Tales as far what serves as puppets, their movement, and the wonderful way the puppets are used, for example having actors hold little rubber duckies and making them speak just the way children often do.

Jane Casanave’s colorful contemporary costumes pop under Jay Ryan’s luscious lighting. A stunningly clever multilevel set, designed by Doug Greene is adorned with swinging planters that also spin and twist, versatile multifunctional furnishings and the children’s garden behind it is a feast for the eyes, and a spectacular setting for photo opportunities. Daniel Ison’s sensational sound accentuates the experience of being transported to another realm…

Wilde Tales is a holiday treat for young people of all ages! 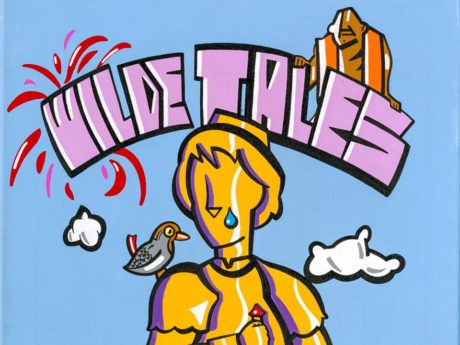