The Winter Solstice is still several days away, but that shortest and often darkest day of the year will be a great treat for anyone observing it, with the crowds who headed last weekend to a packed Lisner Auditorium for the return of  The Christmas Revels in this year’s spectacular A Nordic Celebration of the Winter Solstice in Music, Dance, and Drama. 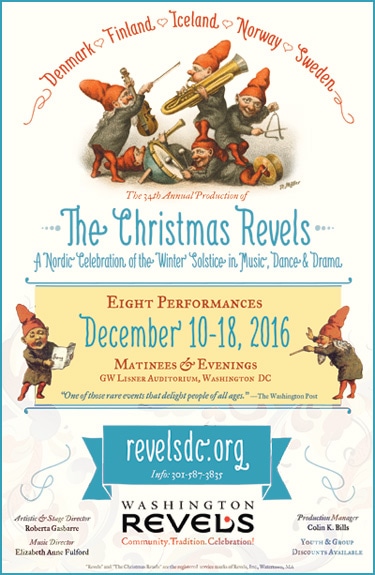 Christmas shows and pageants abound in Washington at this time of year, but the Revels is in a league of its own. Imagine if you will, a cast of over 100 people, ages 8 through 85, taking the audience through traditional material from the five Nordic countries: Denmark, Finland, Iceland, Norway, and Sweden. This show is in effect a repeat performance from 1996 and 2005,under the ever-polished direction of Roberta Gasbarre (Artistic Director), Elizabeth Anne Fulford (Music Director), and Colin K. Bills (Production Manager.)

What do you get for the price of a ticket? A multi-ethnic cast gorgeously arrayed–to say “dressed” would be inadequate–in authentic and eye-ctching native dress. There are too many people to credit with what is worn onstage as the clothes, headdresses, etc., are, in addition to the music and dance, a large part of the enjoyment. The cast also provides interaction with the audience and conducts sing and dance-alongs in the aisles.

In a show with 44 musical numbers, there are some standouts. There is the opening number, the “Brurelat”or “Bridal Song” by Edvard Grieg, Norway’s most celebrated composer, in an arrangement for a brass quintet.  To the interest the children in the audience, there are the Solstice Teens and the Northern Lights Band performing a circle dance from Finland, and children’s songs and dances. There is an inventive version of “Silent Night” beautifully sung by two solo voices, joined by a chorus singing the verses in three Nordic languages and, then to conclude it, an audience sing-along in English.

Some of the promised spectacle occurs before and after intermission. There is a figure of Louhi, witch of the Northland, who steals the sun and the moon, leaving the world in darkness. Represented by special effects and at a size several times that of human, Louhi makes her way down the aisle with gasps of awe and admiration from the audience.

The second act produces a different form of showstopper in the form of Tom Lovli, who reprises from earlier Revels the Norwegian hallingdans (halling dance), as much a spectacular athletic feat as dance. His expertise clearly preceded him. Tension and hopes mounted as he danced past a young woman holding a hat aloft with a cane ten feet from the floor.  Could any human touch a hat from such a height? Lovli could and did…bringing down the house, hat and audience.

I rate the show five stars for its entertainment, artistry, and its ability to share traditions.

Running Time: 2 hours and 30 minutes, including one intermission.

The Christmas Revels’ A Nordic Celebration of the Winter Solstice in Music, Dance, and Drama plays through this Sunday, December 18, 2016, at George Washington University’s Lisner Auditorium – 730 21st Street, NW, in Washington, DC. For tickets, call 1-800-595-4849, or purchase them online.

Congratulations to the incredible Artistic Staff for all their amazing creative contributions to this mega-holiday production.

And thank you to all the performers: