With the audience seated in the round on a floor shared by the playing space, you could feel the whole place shaking and quaking. It was no subterranean tremor; it was the ebullient Step Afrika! ensemble doing their dance moves. And their rhythmic pounding stomping stamping was reverberating with a vibe that was irresistibly joyful.

Set Designer Ruthmarie Tenario has made of the Sprenger Theatre a virtual winter wonderland. The stage painted blue is festooned with blue and white streamers, and in the four corners of the black box stand evergreen trees decked in lights. On all the  walls are hung huge white cutouts of trees, and upon them Lighting Designer John D. Alexander makes it snow oversize snowflake projections—the first of many effects that will get more and more wondrous.

Atop a platform overlooking the stage stands DJ Frosty the Snowman (played by Jeeda Barrington) with his turntable scratching seasonal tunes with cheery beats. (The amplification by Sound Designer Patrick Calhoun gives the space terrific acoustics.) The show proper starts with two drummers at twin drum sets who rock the house and knock us out spinning their sticks with a flourish.

Enter the ensemble performing a section of the program called “It’s Time for the Holidays,”choreographed by Jason Nious. They wear smart black-and-white formal attire, the first of several stunning wardrobes by Costume Designer Michael Murray. Strangely but amusingly, three cosplay-like figures are also loping about: a penguin and a couple of polar bears.

Suddenly we are treated to Step Afrika’s signature choreographic technique of stepping, clapping, kicking, and body-thumping—a performance style that’s breathtaking in its synchronization and astonishing in its ingenuity.

A second section titled “March of the Nutcrackers,” choreographed by Christopher Brient, had the cast dressed as toy solders. Later they appeared as elves and ballerinas, later yet in contemporary fashions. During their several offstage costume changes, the show’s buoyant pace was kept up by soloists and Emcee Jakari Sherman.

There is impressive cohesion in motion among Step Afrika! performers. They are clearly one another’s peer in virtuosity, and the exuberance that comes of their unanimity is infectious. So when now and then they show off individually—as if to say, Here’s what I got; see if you can top that!—or when other competitions arise, you get that it’s all part of their polished play-acting. And you know this troupe is tight.

During a mock step-off between “the ladies” now dressed as glam ballerinas and “the fellas” now as goofy elves (“The Arctic Step Challenge”), there were startling splits by the women and a hilarious miming of snow angels by the men. As with some other sections of the show, the dancers did the amazing choreography themselves. Sherman as referee got the audience cheering and applauding for the “winning” team, then brought the two rival groups together in what became a show of high-impact solidarity.

A fun section titled “DJ Frosty’s Yuletide Step Workshop” got audience members out on the stage, now a dance floor where adults, tweens, and tots alike learned The Frosty Shuffle and frolicked alongside the cast.

A section called “Snow Day,”choreographed by Jakari Sherman, began with a bluish light effect evoking fallen snow. Several steppers wearing work boots and uniforms entered carrying shovels, and soon the sounds of these tools scraping and striking the stage combined with the sound of feet tromping and boot slapping. Then the rest of the ensemble joined in with shovels as well. It was as if Stomp had blown into town.

A section called “Home for the Holidays,” choreographed by Jakari Sherman,  was a spectacular finale that brought the whole cast back in assorted costumes they’d worn before. They set up a big abstract tree sculpture center stage and trimmed it in bright colored balls under a real fake snowfall. Then this gift of a show wrapped with another come-one, come-all dance party.

For 22 years Step Afrika! has been, as Founder and Executive Director C. Brian Williams said before the show, “stepping around the world.” Easy to understand why it’s so popular; the company’s talented performers and distinctive choreography have enormous and timeless appeal across generations and cultures. (You simply have to experience it visually and viscerally if you’ve never done so. It’s theatergoing like none other.)

But as I discovered the night I saw the 2016 edition of Magical Musical Holiday Step Show, there’s another dimension of Step Afrika!’s appeal that feels particularly welcome right now. Whatever worldly cares you might have come in with get set aside. And in their place happens one of the happiest holiday times in town.

Note: This is definitely a show grownups can enjoy whether accompanied by youngsters or not. For those who do bring children, Step Afrika! invites you to come to the crafts table in the Atlas lobby 30 minutes before showtime so they can create and decorate musical instruments such as clappers, shakers, and drums to be played during the show. (The night I was there, the little ones played only on cue—and it was cute.) 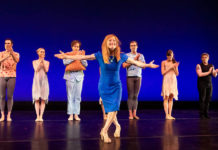