Oscar Wilde (1854-1900), famous and controversial Irish playwright, novelist, essayist, and poet, also authored thought provoking fairy stories for children that appeared in various magazines. Married to Constance Lloyd, Wilde fathered two sons—Cyril (1885) and Vyvyan (1886). In 1888, Wilde published The Happy Prince and Other Tales. Philadelphia’s Quintessence Theatre Group presented five of them in most creative ways under the direction of New York Director Jeremy Bloom: The Devoted Friend, The Nightingale and the Rose, The Remarkable Rocket, The Selfish Giant, and the most famous of them all, The Happy Prince, led to a remarkable evening, enthusiastic reactions from children and adults alike, and a positive, critical response from all theater reviewers.

Henrik Eger: What are some of your first memories as a child or a young person in getting involved with the theater?

Jeremy Bloom: In the third grade, I responded to a local call for children to play munchkins in a version of The Wizard of Oz at a local high school. For the audition, I sang “I Got No Strings” from Pinocchio, reading the lyrics off the pamphlet that comes in the CD jewel case. I really hadn’t any strings at the time.

What were your first experiences with the work of Oscar Wilde, one of the wittiest, but also one of the most vulnerable Irish writers in oppressive Victorian England?

My first Wilde encounter came in the form of a T-shirt I got at a Rufus Wainwright concert when I was 14. It read, “Being natural is only a pose, and the greatest pose I know.” This inspired me to read Dorian Gray, which I devoured.

You said that Wilde Tales “is near and dear to my heart.” Tell me why.

It is newly near and dear to my heart, yes! I was just introduced to the material by Alex [Burns, Artistic Director of the Quintessence Theatre Group] nearly a year ago. While I had not grown up with these stories, I now can’t imagine my life without them, as they seem to be little guidebooks on “how to be.” They are poetic and searing, and particularly suited for a stage adaptation.

The challenge of staging these seemingly unstageable moments between animals and inanimate objects is exactly what draws me to the theater. How can we tell these stories efficiently? My goal is to get rid of any excessive gesture, but also to keep the scale epic, and the visuals beautiful.

What were your first reactions to the invitation to direct Wilde’s moving story, written for children, and the challenge they present for any director?

Reading Wilde’s stories made me laugh and cry and shake my head all at once. That was enough for me. I knew right away that our handful of actors would have to play about 40 roles and that we should use objects to denote character. I also knew that all the stories should take place in a single garden. Nature pervades every single story.

Tell us about the stage design and Doug Green’s unusual transformation of the old theater into a magical playground. Walking into the theater, I thought I had entered a kind of Alice in Wonderland world.

The first decision was to set the play in a garden, where things could grow—a single space that could become each of the five settings. The props we used in the play would emerge from the garden and be used in each scene, so that there would be a cohesion between the stories. We wanted it to feel current and based on everyday objects. Doug collected things from gardens all around Philadelphia, and worked tirelessly and imaginatively to create a beautiful environment that strikes you the second the audience enters the space. Enhanced by Jay Ryan’s lighting, our world is one of hot pink and bric-a-brac and manic order and plantings.

The down-to-earth magic was also reflected in the costumes.

Yes, Jane [Casanave] is wonderful. We wanted to streamline what the performers wore, making sure to suggest character, but also very much setting our world in today. Jane used painterly color gestures that track the actors through the play.

You created a kind of Gesamtkunstwerk that encompassed a wide range of arts, including special sounds.

Thank you. As I imagined them in a theater, I heard the sound of birds and crickets. Philadelphia’s Daniel Ison designed the perfect sound.

I knew a challenge would be to unify the five stories into a single arc and to create a vibe that carried the audience from story to story. Therefore, I decided to integrate vocal music, songs composed by David Cope—not to further the story, but to create a mood in the space I used.

Given that many of the characters in Wilde’s Tales are either animals or inanimate objects like the sculpture of a Prince, how did you handle those challenges in your production?

Many theatrical adaptations of these stories use costumes to portray the non-human characters. One of my first decisions in our production was to use handheld objects to represent the different species as our primary storytelling mode. This allows the puppeteer performers to maintain a level of humanity: it’s not just a talking bird, but it’s a complex human storyteller alongside an object of a bird.

For example, our Swallow is portrayed by the gesture of an actress holding two bean pods in a V-shape as a child would draw a bird. This concept was introduced by our puppet designer Martina Plag. It typifies what I would consider an exciting and efficient use of an object in a play. Rather than hiding the puppeteer, we wanted to embrace the actors’ presence along with the objects. This process seemed like the simplest, most elegant solution.

The famous Prince was portrayed by a young woman.

True. Rather than attempt to cast a strapping young man as a prince or male student, the female actors in the play often portray male roles, and there is little attempt to alter the actors’ appearance through costume design. I feel that by having some distance between the actors’ bodies and the storybook character they are portraying, we are able to engage the imagination in a particular way.

You engaged many children on stage and in your audiences.

Yes. We are creating a space where anyone can imagine being anything is important. We did our best to cast the play based on choosing a group of divine performers for their particular mix of personalities and talents, then chose what roles they would play later.

Oscar Wilde addresses not only life but also death and dying—not exactly the stuff of most children’s stories and plays.

All five of the stories end in some sort of death and two of them end with particularly religious images—God and Jesus escorting the characters to an afterlife—odd for typical children’s theater and odd even when Wilde first published the stories. But there is an optimism and beauty in the way that the life cycle progresses through the stories and is treated in a way that is beautiful and comforting for children and adults. As a result, I chose to integrate the song lyrics from Wilde’s De Profundis, written in prison, and was struck by his spirituality and the way that nature reigned supreme.

We have a number of beautiful old theaters in Philadelphia, but none as spectacularly unusual as Quintessence’s main hub, the historic Sedgwick Theatre in Germantown. You recreated the space as I have never seen it before. Tell us more about it and the reasons for your transformation.

Quintessence and the Sedgwick Theatre are amazing. The glorious architecture with its art deco design makes the space unmistakable. We had the option to cover up the walls with curtains or to expose them. We chose to expose them anywhere we could. Jay Ryan, the wonderful lighting designer, used the space sculpturally to highlight the original architecture. The connection to the specific plays helps us root the story in the community and in the history of the place.

You began the sequence with the most famous of Wilde’s Tales and ended with a less well-known tale.

We begin with “Happy Prince” and end with “The Remarkable Rocket” in the order that Wilde published these stories. I felt like there were big clues in this order about the function of the stories and tried to pull out a narrative arc that stretched across the whole evening. The rocket’s ascent from the campfire at the end of the play becomes a sort of even grander attempt to be an ending to the whole evening. The rocket sees himself as creating a great sensation, and I see the rocket’s ascent as a reflection on all of life, a desire to be heard, a desire to do something important—a last shot. Conversely, the opening story feels like a beginning when the swallow feels very young. It’s a moment of discovery.

When you presented that famous “wall” scene, the adults in the audience roared with laughter as we, I’m sure, all saw the president-elect build an even bigger wall and keep people out. Tell us more about your reading of those scenes and the enthusiastic reactions from the audience.

The themes of national politics are deeply embedded in these stories. I can’t really bear to write anything about Tr*mp but the connections are obvious, down to the very diction of “The Miller,” “The Giant,” “The Rocket,” and others. I do think that the stories are a powerful comment on this historical moment in the US. Wilde Tales discusses generosity, kindness, integrity—all valuable lessons in the face of certain political messages of selfishness, meanness, and dishonesty.

We like to play Sharon Jones’ music around the theater, particularly her cover of “This Land is Your Land”—a highly political song whose message is right in line with the moral of The Selfish Giant.

A number of scenes are filled with deep religiosity, enabling the actors on stage to provide a moving performance, accompanied by powerful, yet subtle ethereal music engulfing the auditorium. Tell us more about it.

I was struck by the stories in the context of Wilde’s life. In the biopic with Stephen Fry and Jude Law, as Wilde is being sent to labor prison, he reads his children the story of “The Selfish Giant.” The giant’s death becomes his death. These stories—written more than a decade before his death—seem to allude to a worldview that Wilde laid out in his prison letters, De Profundis.

I began looking to Wilde’s later writings to find little world-view soundbites that we could use to contextualize the stories. Our opening song from De Profundis becomes a frame for the short stories with our children’s chorus singing these lines:

Far off, like a perfect pearl, one can see the city of God. It is so wonderful that it seems as if a child could reach it in a summer’s day. And so a child could.

Thank you, Jeremy, and everyone who contributed to this moving production of a father’s Wilde Tales. 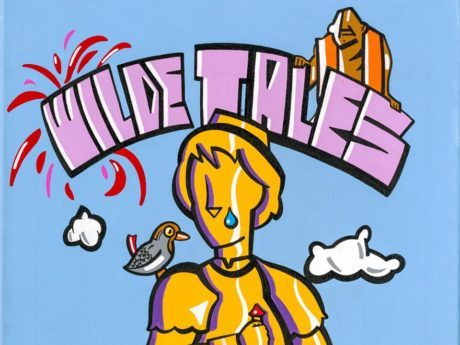