The Music Center at Strathmore celebrated the start of 2017 with Salute to Vienna. This annual tour, produced by Attila Glatz Concert Productions, featured the Strauss Symphony of America, conducted by the spirited Imre Kollár, who hails from Budapest. Several of the orchestral selections were showpieces for opera/classical singers Soprano Katarzyna Dondalska (Berlin-Warsaw) and Tenor Zoltán Nyári (Budapest).

Other pieces beguiled the inter-generational crowd with dance: three ballets by six very graceful dancers from the National Ballet of Hungary, and three ballroom dances by two couples who are listed in the program as, “International Champion Ballroom Dancers.”

Throughout the concert there were humorous touches that elicited chuckles and giggles – clearly this was a family friendly event that aimed to make this music accessible for all ages. Although they sang in German, Dondalska and Nyári were very animated and broadly gestured (especially in Dondalska’s “Les Oiseaux” (Doll Song) from The Tales of Hoffman by Jacques Offenbach), which provided a good visual context to the music..

Nyári burst onto the stage with his first piece, “Als flotter Geist” from The Gypsy Baron, immediately cuing the concert goers that we were in for a very high-energy piece, which he finished with a flourish and a big wink. They both engaged the audience well and their clear tone and vocal range were a delight to hear.

The three ballet couples were: Dénes Darab and Rita Hangya, Minjung Kim and Balázs Krajczar, and Gergely Leblanc, and Jessica Leon Carulla. The men executed a series of full lifts and soaring leaps that looked effortless while the ballerinas projected lightness and a joyfulness that were captivating.

Of particular note is their first dance, the very romantic “Tausent und eine Nacht Waltzes, Opus 346″, in which the men attempted to attract the ladies with a rose and a box of chocolates with varying comic results.  The ballerinas were in all white, with tutus that were about knee length in the front and down to the ankles in back. So while the audience could see their fancy foot and leg work from the front, when their dance partners spun them around and around, they would lift up an edge of the longer skirt section and the resulting effect was as if they were whirring about in a full ballroom length skirt. The other two dances the six dancers performed were equally enchanting, thanks to choreography and costuming by Marinanna Veneki. 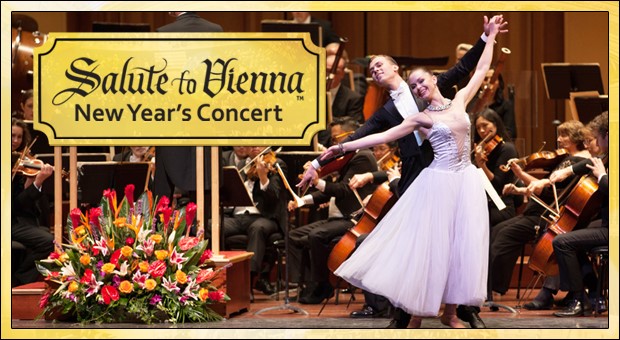 The four ballroom dancers, Mate Csorba, Gyorgy Dual, Sabrina Hadad and Rita Torkos, like the ballet dancers, used the narrow width of the stage apron to their best advantage, primarily by crossing the stage from left to right and back again in choreographed sequences by Csaba Laszlo. These dancers had the waltz posture of shoulders and heads tilting back which many viewers undoubtedly have admired on episodes of Dancing with the Stars.

I was surprised by the choices the ballroom dancers’ Costumer Szilvia Szatmári-Nagy made. The first dance, Strauss’s elegant Wiener Bonbons Waltzes, Opus 307, had the ladies wearing hot pink, part silver sequins and part black lace dresses that brought to mind saloon dancers in a spaghetti Western. For their second dance, they wore short, black and red corseted French maid costumes including fish net stockings. These costumes were jarring enough that they took my attention away from the dances themselves, instead of complimenting them. I thought I’d see blue dresses for the Blue Danube Waltz, but alas, they were pink.

The Strauss Symphony of America began the second half of the concert with Strauss’s Overture to The Gypsy Baron and it gave them the opportunity to capitalize on  the excellent blend of their collective sound. Lyrical melodies featured the oboe, flute, and clarinet. It was heartening to see such a mix of musicians onstage, spanning several different decades in life, and also an equal number of men and women. For all those children in the audience, perhaps coming to their first concert featuring classical music, they could surmise that this is music for everyone to play, and enjoy – as evidenced by watching the frequent smiles on the faces of the orchestral musicians. They were clearly having a great time up there on stage!

As the concert began to wind down, it wound up the audience by employing a “clap along” – sometimes softly, then cranking it up to full enthusiasm, and back and forth. It was a fun way to participate, and one jovial older gentleman was seen dancing in the aisle! All of this led up to an encore performance of the beloved “Blue Danube Waltz,” and a well-deserved standing ovation.

The Salute to Vienna New Year’s Concert, according to program notes, “Is a 22 year-old North American tradition, and it will return to The Music Center at Strathmore again next year on Saturday, December 30, 2017, at 3 PM. You can purchase tickets here. Make it part of your next holiday season, especially as a friendly introduction to classical music for the youngsters you nurture.