DC Audiences are cramming into a Dupont Circle Hotel to catch this monthly show. After experiencing this supercalifragilisticexpialidocious performance of abracadabra, I still don’t know the answer to this question: How did they do that?

After reviewing other magic and magical performances at Arlington Drafthouse, Bethesda’s Writer’s Center, and The Kennedy Center, performers Brian Curry and Mark Phillips have succeeded in carving out a unique magical niche. Before you can say, “Alakazam!” you can sit back and say (to yourself of course): “Let the competition begin!”

Besides Mr. Curry and Mr. Phillips each competing for your attention, they are simultaneously competing against each other for the coveted evening award decided upon by you – the audience. Simultaneously, they are making you laugh not only by “cutting up” each other, but allowing the audience to be part of ‘the act’ by encouraging their participation.

What does one do with regard to magic ‘hocus pocus’ these days? They do utilize playing cards, manipulate rope tricks – where three ropes become one – and they convince the audience with reminders throughout the evening that this is “kid’s magic —it’s all about the journey and not the destination.” Tricks happen quickly… wedding rings are joined together from trusting members of the audience and fortune cookies end up with unique messages inside geared to audience input. After 45  minutes, their reminder to their patrons at intermission is: “Believe in Yourself; no one else does”! 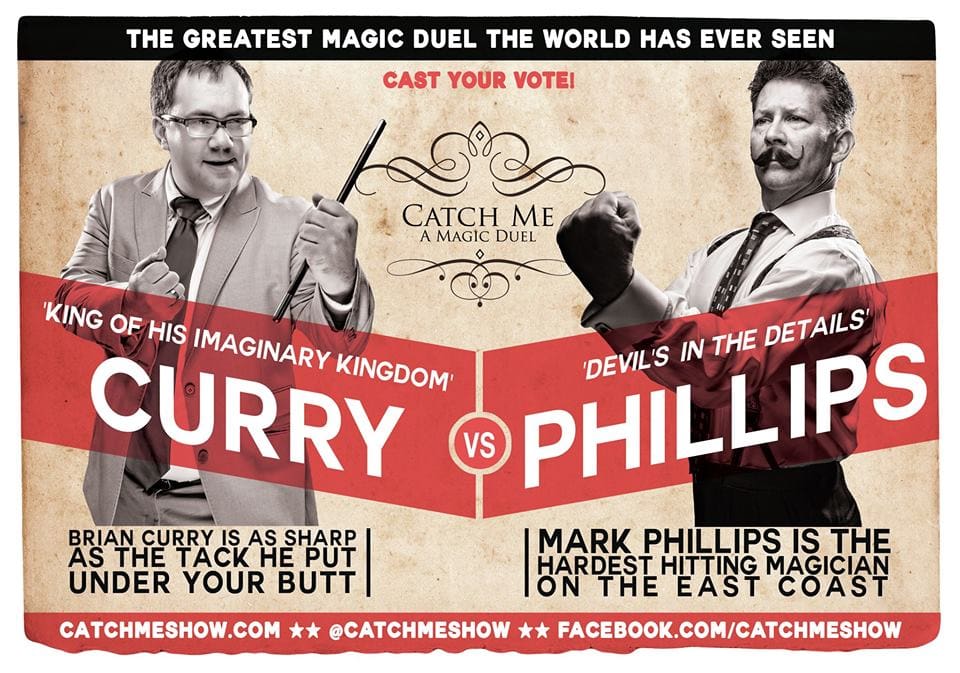 Throughout the show, Brian and Mark each campaign for your vote to earn the title of the ‘Best Magician’ magician of the evening. Brian voiced this reminder to all in the room – ”Vote for me…Make Magic Great Again!” They definitely have this carefully construed with a comical approach combining  the best of DC politics with comedy and ‘Presto Chango.’

Why was Act 2 entirely different from Act I? Magic tricks now include audience volunteers to participate with each performer on each new magical adventure. This is an extremely challenging entertainment approach since actions by any audience volunteers that are unexpected and unplanned may not only screw up the trick – but could potentially ruin the show. Nevertheless, these two slick and slippery magic men take turns outshining each other and utilize their audience helpers as a positive plus for their antics and incantations.

Don’t dare leave before the evening’s humdinger of a last act, even if you have to get home to put the kids to bed. The last of the night’s events is a gem. If you are into graphical numerology, you won’t want to miss it. Audience members are all standing around at the end looking at this chart sitting on the stage and wondering… “No Comprendo!” Realizing the importance of voting these days, you don’t want to miss the crowning of the winning competitive magician at the end of the evening.

Catch Me: A Magic Duel plays though February 25, 2017, at the Mayflower Hotel – 1127 Connecticut Avenue, NW, in Washington, DC. For tickets, purchase them online.