Enter the new year laughing out loud with the cast and crew of Enter Laughing at The Players Club of Swarthmore, directed by Paul Kerrigan! Joseph Stein’s tour de farce, inspired by Carl Reiner’s same named semi-autobiographical novel set in the 1930s, takes a comedic peek at the reaction David Kolowitz (Mike Sokolowski), a recent high school graduate from the Bronx and nice Jewish boy, has to being bitten by the ‘acting bug.’

David’s boss, Mr. Foreman (Paul Kerrigan) sees a potential future for David in his sewing machine factory and David’s parents so want him to be a pharmacist. However, David’s desire for girls and acting lead him to Mr. Marlowe (Joe Tranchitella) and his plagued playhouse, along with his daughter Angela (Elizabeth Hennessey) the leading lady, who of course leads David onward. David struggles with the script, lip wrestles Marlowe’s daughter, and eventually gets tongue-tied between his made-up excuses over his odd behavior to his boss, his over openness with his best girl, Wanda (Blake Eckert), ducking his parents probes, exaggerations to his friend Marvin (DJ Gleason), and his stage debut. Combine anything that can go awry in this crazy comedy with all the hams sandwiched in the play-within-a-play, and you have one delicious night of entertainment.

There are also some beautifully poignant moments in the play as well, when David is faced with the unconditional love bestowed upon him by his steady girl, Wanda.  No matter that he has told her he is constantly attracted to other women, or that he hurts her tender trust and feelings, or that he has borrowed money from her that he may, or may not ever repay, she stays true to her nature and continues to care about him, eventually saving the day.

Mike Sokolowski’s super kinetic rendering of David Kolowitz is absolutely engaging, energizing the stage and keeping viewers rapt, while Blake Eckert successfully imbues her character Wanda with a solid soul and maturity beyond the character’s years. She is a pool of peace within a whirlwind of wackiness. Their dichotomous personalities work well with DJ Gleason’s Marvin providing a marvelously funny foil. Paul Kerrigan, doing double duty as director, does a fantastic job playing Mr. Foreman as well, bringing sincerity and zest to the role.

Joe Tranchitella skillfully takes command of the stage as Marlowe garnering guffaws, nearly stopping the show, with Angela, divinely played by Elizabeth Hennessey right behind him, especially with her line “Daddy should you be drinking?” and his flat response “Yes.” The repartee, verbal and physical, between Leslie Norton and Michael Tamin Yurcaba as Mother and Father – classic!

Emily Grace Murray delivers a sweet and sassy Miss B. the secretary, while Ryan Henzes later rakes in the laughs as her stage beau Roger. Seth Koch, as Pike, and Joe Selfridge playing the Waiter and Lawyer earn their share of cackles in their roles, along with the two wannabe actors Don Baxter and Don Darwin performed by Connor Behm and Adam Young.

The plucky cast and crew keep up the pace during the many scene segments, yet present plenty of opportunity for actors, backstage crew, lighting, and other tech hands to coordinate, making for a smooth flowing show. The set design, by Joe Southard, imparts the aura of the play’s time and place, and furnishes splendid settings for each scene.

Ring in the New Year with a roar of hilarity at The Players Club of Swarthmore with Enter Laughing! 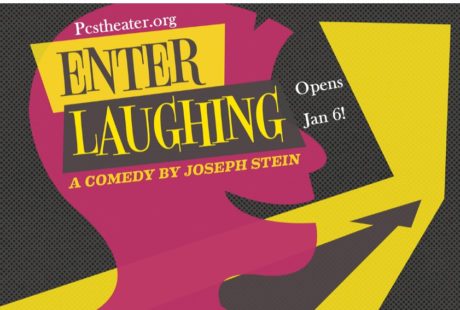