Growing up, one of my favorite books was Frances Hodgson Burnett’s A Little Princess, the story of an imaginative young heiress whose kindness and grace help navigate her through one of life’s difficult journeys. Adapted by Vera Morris and with Music and Lyrics by Bill Francoeur, Encore Stage & Studio present a musical version of this classic; one that I was eager to review. Sarah Conrad directs a large cast of youths for a fun family production that is “by kids, for kids!”

As the ensemble begins the production by singing a solemn number called “Little Princess,” young Sara Crew (Zoe Rocchio) can be seen side stage having a pantomimed argument with her father. Heavily uniformed and emitting a strong sense of duty, her father gives her one last gift before he reluctantly exits, leaving Sara scared but stoic, clutching her new doll as the song ends. Music Director Galvina Tarasova and Choreographer Carla Astudillo do a great job with this opening scene–with a slow, melancholy dance routine and perceptive lyrics, emotion and plot information are given before a single line of dialogue is spoken.

With her father away at war, Sara is enrolled in Miss Michin’s Select Seminary for Young Ladies, a strict academy led by the intimidating, menacing Miss Minchin (Nadya Steare). The pupils live in fear of Miss Minchin, and sing about how they must behave like proper young ladies at all times (“take away this ball and chain, this place is driving me insane!”) Stifled and frustrated, the girls find a happy reprieve with the arrival of Sara; kind, generous, and creative, she quickly becomes the new favorite– to the chagrin of Lavinia (Hannah Knittig), who seethes with jealousy over Sara’s riches and attention. Tensions rise between the girls, but Sara’s innate kindness allow her to easily handle the situation with charm and poise. However, when tragedy strikes, Sara suddenly finds herself in a desperate, sorrowful situation. Sara must adapt to a new (and cruel) way of life. While navigating her way through this newfound trauma, strength of character is tested…and its value is rewarded.

While perfect performances should not be expected (these kids are still learning and honing their craft), there is a great deal of budding talent onstage. Zoe Rocchio and Hannah Knittig both display beautiful vocals while singing about their fathers, and Sophia Bailey is great as Becky, a put-upon servant girl who shares the hopeful song “Two little girls” with Sara. However, my favorite performance was Nadya Steare as Miss Minchin. Disciplined, severe, and with command that cuts like a knife, she radiates an energy that fills you with unease, without her ever once losing her temper or coming off as “unladylike.” To accomplish that feat takes a lot of talent–and good, solid direction. There are fun moments to be had as well, like the upbeat number “Sunny Day in London,” which showcases the talents of the collective ensemble. The kids work well together, and have a blast doing it.

Technical Director and Set Designer Kristen Jepperson creates a lavish set for Miss Michin’s Select Seminary for Young Ladies; with its grand fireplace and polished wooden furniture, the school’s classrooms and halls prove a stark contrast to its cold, threadbare attics. Beautifully detailed and sturdily built, the sets do a great job spanning extremes, from decadence to destitution. 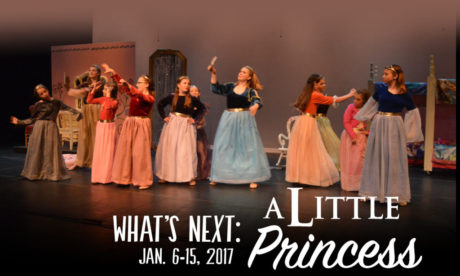 Lighting Director Gary Hauptman, Assistant Designer Ian Claar, and Audio Technician Vandr Lockett complete the atmospheres with effects such as whistling winds and dappled sunlight. Debra Leonard’s costumes and hairstyles showcase the early 1900s (and its severe class-system). With a solid and reliable technical base, the young actors are free to bring the story to life onstage.

Encore Stage & Studio’s production of A Little Princess is the perfect mother-daughter outing. Grab a pair of tickets for your princess before they’re gone!

Running Time: 1 hour and 45 minutes, including one 15-minute intermission.