Kathleen Madigan: Bothering Jesus Tour at the Weinberg Center for the Arts 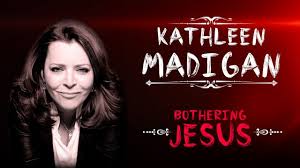 With a refreshing take on life’s absurdities and a brand-new Netflix special (“Bothering Jesus”), prolific comedian and television personality Kathleen Madigan will take the stage at the Weinberg Center for the Arts this Saturday, January 14, 2017, starting at 8 pm.

Recipient of the American Comedy Award for Best Female Comedian, over the course of her 25-year career, Madigan has performed on nearly every late night show ever made, including Leno, Letterman, Conan, Ferguson, Wilmore, and Ron White’s Salute to the Troops on CMT, her fifth appearance on the annual show.

In 2014, Madigan was nominated for an American Comedy Award for Best Concert Comic and her third one hour special, Madigan Again, was named one of iTunes Best Comedy Albums. Previously, Madigan has released 5 CDs and 3 DVDs and starred in 2 HBO specials, 3 Comedy Central specials and her previous one hour special, Gone Madigan, premiered on Showtime and is available on Netflix. She remains the only comedian in the history of NBC’s Last Comic Standing to go unchallenged by any other comedian. Madigan was a top three finalist in Season 2 and a judge on Season 5.

In addition, Madigan is a favorite on nationally-syndicated radio shows such as the The Bob and Tom Show and The Stephanie Miller Show. She is in constant rotation on SIRIUS-XM Radio and is repeatedly voted the #1 audience favorite by listeners. Madigan has performed internationally at festivals and theaters in Ireland, England, and Australia, and has filmed six Montreal Gala Shows at the Montreal Comedy Festival for Canadian television.

Tickets for Kathleen Madigan: Bothering Jesus Tour may be purchased online at WeinbergCenter.org, by calling the Box Office at (301) 600-2828, or in person at 20 West Patrick St. Frederick, MD. Discounts are available for students, children, military, and seniors.