Ethan Miller makes his Arena Stage debut playing one of the three children in Lillian Hellman’s 1941 drama Watch on the Rhine. It’s not what you’d call a kid’s show. Set in 1940, the play echoes with anxieties that would have been familiar to an audience of Americans witnessing the rise of fascism in Europe. Even today it may resonate for grownups to whom current headlines are giving qualms. Hellman did not hold back. The masterpiece packs a punch.

By way of introducing DC audiences to the play, I thought it might be interesting to look at it through the eyes of the young actors who are in it. How are they wrapping their heads around it? Curious, I drafted a set of questions, and they each kindly agreed to compose answers. 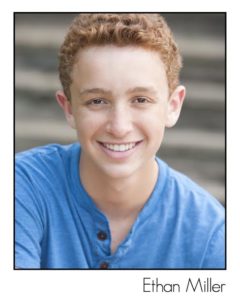 First in this series is Ethan Miller, who received a Helen Hayes nomination for his performance as Miles in Creative Caldron’s original production of The Turn of the Screw. His resumé also includes the Clown in Madeline and the Gypsies (Creative Cauldron) and a Newsboy in Gypsy (Signature Theatre). Ethan is a company member of Adventure Theatre’s Musical Theatre Pre-Professional Program.

John: How old are you and what grade are you in?

Ethan: I am sixteen years old and I am in eleventh grade.

What made you want to act, and what was your first experience on stage?

My love and passion for acting came from, and still comes from, the need to experience the different worlds and lives that the characters live in. The first production I was ever in was Oliver! when I was eight years old.

I played the role of Miles in The Turn of the Screw at Creative Cauldron, Melchior in Spring Awakening at Ovations Theatre, Scarecrow in The Wizard of Oz at Young Artists of America. My high school roles include Finch in How to Succeed in Business Without Really Trying and Senex in A Funny Thing Happened on the Way to the Forum.

I play Joshua, who is the oldest of the three siblings. He has a higher intellect than most adults, as he is able to speak five languages. He also has the maturity level of an adult, even though he is only a teenager. During the play he leads his younger siblings and helps his parents take care of them. He has seen much of Europe and has experienced how cruel the world can be, and therefore has very little “child” left within him.

Watch on the Rhine takes place in 1940, shortly before the United States entered World War II. Your mother is American and your father is German. What do you think it means to your character that your father is against fascism and the Nazis?

Joshua lived in Germany during the fascist regime and knows how dangerous fascism can be, and he has a great sense of patriotism for his father’s mission. Also he has a small sense of democracy, because his mother is American, which gives him more of a reason to stand behind his father’s work. There is also a great sense of fear involved, because it seems no matter where they go, fascism always seems to follow.

How can someone your age relate to themes that are in Watch on the Rhine?

In the time period when this show takes place, very few people had the right to speak up about important world matters such as human rights. Among the excluded were children. They did not have a voice, and even if they did want to speak up, they were not allowed to. It is important for teens to see this show and appreciate how fortunate we are. Unlike in the show, teens today are able to be heard and to be seen, and can make a difference by speaking up instead of being silenced.

What have you learned from the adult actors in the show?

Throughout the process, I have learned many things from everybody participating in the show. One piece of advice that I was given to me was to relax. It is very easy to become too focused on the technicalities of your own performance and your own skills, especially with this incredible cast, but I have learned that the best way to truly bring out your character is to relax and let him come out.

What suggestions has Jackie Maxwell the director given you about your role?

Jackie has taught me so much. One of the biggest suggestions she has given me is to keep my character interested in the adult politics. Because Joshua is so ahead of his time, he should be just as interested in politics and understand them just as well as any adult in the household.

What advice would you give a young actor like yourself who is preparing to play this role?

Trust your instinct. If you’re playing this role, you are most likely a teenager, which means that you probably understand how Joshua thinks. Learn as much as you can about Joshua and his family and have as much fun being him as I am.

Why would you urge theatergoers to see Watch on the Rhine?

People should see this show because today there is much social unrest, and we need to look back to a time when similar events such as hate crimes and nationalistic views and actions were taking place, and analyze what they turned into.

Meet the Three Young Actors in ‘Watch on the Rhine’ at Arena Stage: #1 Ethan Miller.

Meet the Three Young Actors in ‘Watch on the Rhine’ at Arena Stage: #2 Tyler Bowman.

Meet the Three Young Actors in ‘Watch on the Rhine’ at Arena Stage: #3 Lucy Breedlove.