An aging rock star struggles to stay relevant, or perhaps struggles whether or not to care at all whether she is still relevant, in the Act II Playhouse remounting of 1812 Productions’ one-woman musical I Will Not Go Gently, starring and created by Jennifer Childs. With a comedic lineup of generational perspectives, she examines the process of aging through the lens of the entertainment industry with a keen eye to how we talk about women as they get older.

The title is born of inspiration from the famous Dylan Thomas poem on life’s progression – “Do not go gentle into that good night/ Old age should burn and rave at close of day/ Rage, rage against the dying of the light.” Directed by Harriet Powers, I Will Not Go Gently manages to avert many of clichés that usually accompany a one-woman show about aging. Childs’ framing device identifies a collection of characters from varying generations all reflecting on the process of getting older. Each of their positions differ slightly; some are currently feeling their age, some regretting it, some are proud of it, others doing all they can to ward against it.

Fresh from her Barrymore win for Outstanding Leading Actress in a Musical in the original 1812 Productions mounting at Plays and Players last year, Jen Childs is, as always, a grounded and illuminating presence onstage. Of course she has a knack for impressions and crazy comedy, but what she has on her hands is also no easy task. Childs ably melts one character into another with a stealthy whirlwind of accents and physical personas. All the while she accompanies the action with a classic girl-rock musical score by composer/sound designer Christopher Colucci. Her costume changes tell a story in and of themselves, with a commanding handling of the occasional musical number and plenty of text.

In a typical solo show type setup, Sierra Mist, an aging rock star (with no relation to the Pepsi product), is now a fading British smash hit reflecting bitterly on her upcoming “intimate” tour dates and her competition with a younger, fresher singer who is copying her style. Childs takes on this character fully in a one-sided conversation with her young assistant Kevin, as well as the many characters who follow: Abby, a middle-aged mom narrating her “I Can’t Sleep” podcast as she does yoga; Abby’s daughter Tabitha, who uses five different communication devices simultaneously; Daphne, a motivational speaker pushing superhero stances and capes; and most charmingly, Frida, a 90-year-old grandmother taking on her first open mic standup routine.

The ensuing comedy does not showcase Childs’ knack for timing and wit as much as some of her more casual, off-the-cuff pieces. And while the universal themes are identifiable across ages and genders, the absence of a more invigorated or revolutionary storytelling structure is palpable. Still, Childs is a joy to watch, and the story all the more relevant to anyone who has felt a decade or two pass in the blink of an eye.

Lance Kniskern’s set design is sleek and modern, and although a useful backdrop for the many stories at hand, perhaps a bit large for the cozy Act II Playhouse stage. Shelley Hicklin’s lighting design (adapted by Georgia Schlessman) creates the glowing rock star spaces for Sierra Mist’s career both past and present while warmly hosting the most intimate moments as well. Rosemarie McKelvey’s costume design gives each character a distinctive, recognizable flair, easily changeable onstage for the most part. Jorge Cousineau’s video design brings a welcomed punch of produced content to transition scenes as well as featuring some of Sierra Mist’s classic songs such as “Y2K” and “Jack in My Box.”

For those familiar with the simple joys of reminiscing about their favorite 80’s pop star at their 25th college reunion, I Will Not Go Gently will ring all the right bells about the slow march of time and the millions of personal changes we experience as the years go by. For anyone older or younger, the daily concerns of whether you’re still “relevant” or whether or not you’re becoming your mother will be universal liminal spaces that we can all identify with. Regardless of age, this charming and poignant musical take on the stages of life is a welcomed chance to laugh at ourselves, a pastime that all generations can share. 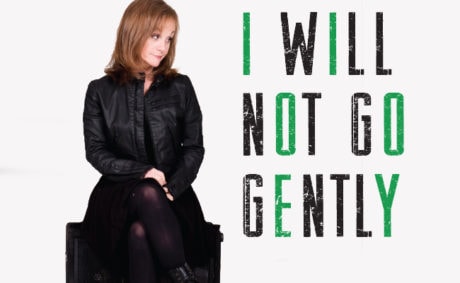