Whacked-out psycho-killer or falsely-accused innocent? We’ll never know the truth about Lizzie Borden, but 11th Hour Theatre Company’s production of the rock musical Lizzie, by Steven Cheslik-Demeyer (music and lyrics), Alan Stevens Hewitt (music, orchestrations, and additional lyrics), and Tim Maner (book, lyrics, and additional music), makes a rock-solid case for guilty-though-acquitted by reason of incompetence – of the investigators and jurors who set her free, despite her destruction of evidence and the glaring contradictions in crime-scene statements and courtroom testimonies (which are quoted in the songs and dialogue of the mostly sung-through show).

On the morning of August 4, 1892, Lizzie’s stepmother and father were found brutally murdered in their home in Fall River, Massachusetts. She had been struck on the head by a hatchet 20 times (not the legendary “40 whacks” cited in the popular jump-rope song); he received ten or eleven blows (not “41”). His unmarried 32-year-old daughter, who had a rocky relationship with the couple, was the prime suspect. She was charged, tried, and acquitted of the infamous “axe murders” after only 90 minutes of deliberation by an all-male jury, then went on to live out her life in luxury, after she and her sister Emma inherited the bulk of the victims’ sizeable estate.

Musical Director Dan Kazemi brings all the ferocity of the crime and its backstory to the stage, in a head-banging score performed live by a killer six-piece band (Kazemi, who plays keyboard and conducts, along with Damon Hunnicutt on guitar, Nero Catalano on guitar and keyboard, Justin Yoder on cello, Mike DiFebbo on bass, and Mark Cristofaro on drums). The show’s fierce heavy-metal and punk-rock numbers – including the ensemble’s savage anthem “Somebody Will Do Something” and the sisters’ contentious duet “What the Fuck Now, Lizzie?!” (with apropos choreography by Peter Andrew Danzig) – contrast with such heartfelt tormented ballads as Lizzie’s “This Is Not Love” and “The Soul of the White Bird” (exposing the sexual and emotional abuse she suffered at the hands of her father); “If You Knew” and “Will You Stay?” (suggesting an intimate relationship between Lizzie and her neighbor Alice Russell); a prayerful hymn by the church-going Borden sisters (“Watchmen for the Morning”); and a haunting rendition of “Forty Whacks” (which opens both acts of the show, before escalating into full-blown shock rock).

As directed by Kate Galvin, 11th Hour’s four-woman cast (all five returning from the company’s 2013 staged reading of the musical in its “Next Step Concert Series”), brings a sympathetic feminist bent to the contemporary envisioning of the historic events. Meredith Beck is sweet and loving as the closeted Alice, then distressed by all the “Questions Questions” following the murders, while her castmates evoke the increasingly justifiable rage of their maltreated characters. Cara Noel Antosca as Emma is angry over the prospect of losing her paternal inheritance to the family of her hated stepmother, and complicit in planting the seeds of action into the mind of her distraught sister before leaving home (or did she?). Rachel Brennan is a standout as the Bordens’ wily Irish maid Bridget Sullivan, with a spot-on accent, a clear resentment of the upper-class family (who often called her Maggie, the name of their previous servant), and a sly penchant for making leading comments. And Lizzie, portrayed by Philadelphia favorite Alex Keiper, is presented as a prototype of female empowerment – a tortured woman provoked to the point of violence, and then remorseless about her “win/win” crimes.

Striking costumes and hairstyles by Kayla Speedy smartly transition from Victorian Gothic into Post-Modern Goth, tying together the 19th Century events with the 21st Century retelling, and at last liberating the repressed women from the restrictions of the past. Thom Weaver’s set and lighting design create the feel of a rock concert, with a three-level stage and colorful flashing lights and spots, while an historicizing curtain backdrop and a few period-style props by Emily Schuman recall the 1890s. Although there were some issues on opening night with the mics going out during solos by Keiper and Brennan, Toby Pettit’s sound design delivered the band’s stellar performance with force and clarity.

Lizzie succeeds not only in provoking thought, but also in entertaining and appealing to a younger generation of theatergoers. It puts an intriguing rock-and-roll spin on the notorious titular character and the still-unsolved homicides, and considers the plight of women in Victorian times through a new empathetic feminist lens. Win/win! 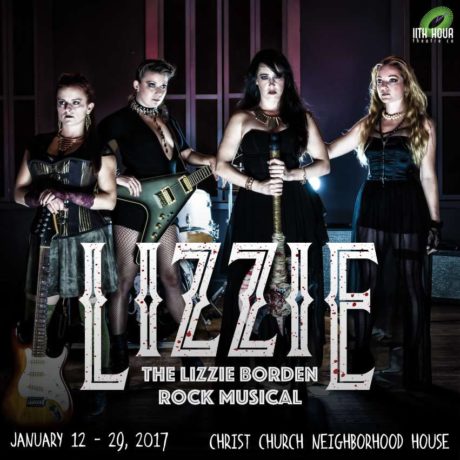