Excellently directed by Laura J. Martin with crisp musical direction from Mat Levine, Mel Brooks’ The Producers at the Washington County Playhouse Dinner Theater is an exceptional evening of musical comedy which may leave you humming the catchy songs…. if you can stop laughing long enough to do that.

Winner of a record 12 Tony Awards, The Producers features down-on-his-luck Broadway producer Max Bialystock, who hasn’t had a hit show in decades. When he meets timid accountant Leo Bloom, who comes up with the idea “A producer could make more money with a flop than he could with a hit,” the two men team up to produce a flop show and keep all of the extra cash. For a sure-fire flop musical, they choose “Springtime for Hitler,” certain to “offend people of all races, creeds and religions.” But what happens when their sure-fire flop musical unexpectedly becomes a hit with the public?

Shawn R. Martin expertly leads the cast as washed up, womanizing producer Max Bialystock. Martin is wonderfully over the top and at ease on stage with all of the broad comedy. His Act II solo “Betrayed” was one of the highlights of the production and included a clever reference to the local theater. His comedic timing and facial expressions were priceless and Martin had exceptional chemistry with Rennes Carbaugh, playing Leo.

Rennes Carbaugh provides the perfect comedic foil as Leo Bloom. As the “straight man” in most of the comedic situations, Carbaugh is adorably earnest and wholesome as a timid, nerdy accountant who gradually gains his confidence while working with Max. He displayed a sweet, old-school charm in his musical numbers “I Wanna Be a Producer” and “That Face” to rival an old school crooner….albeit a slightly awkward crooner.

Taylor Whidden Knapp displays some powerhouse vocals as sexy Swedish actress Ulla. Her solo “When You Got It, Flaunt It” was incredible and Knapp did an excellent job with her comedic timing to bring the ditzy, cute blonde to life.

Andrew Baughman was a show stopper as Nazi playwright Franz Liebkind. Baughman portrayed the comedic character in an unusual fashion from typical portrayals and his over-the-top comedic antics were side splitting. His solo “Have You Ever Heard the German Band” in Act II was hysterical and Baughman included a unique character quirk that allowed other characters to humorously reference him throughout the show.

Stealing the show while in sequins were Shawn Nakia and Scott Ruble as renowned theatrical director Roger DeBris and his common law assistant, Carmen Ghia. The two men were hilariously flamboyant and constantly kept one-upping each other with an over dramatic gesture or look. Nakia was hysterical as Hitler in the “Springtime for Hitler” numbers.

In a show full of hilarious characters, Ryan Perry and Lee Merriman were standout ensemble members in some hysterical featured roles. Perry was outstanding as the Lead Tenor in the “Springtime for Hitler” show within a show and was deliciously campy. Merriman was wonderfully crass and obnoxious in his character roles as Mr. Marx and the judge. 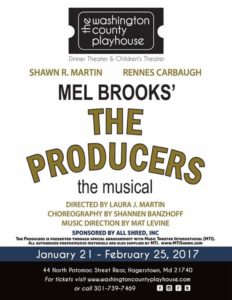 Though The Producers is a hysterical, fast-paced musical comedy, the pace of the production was a little slow to begin and gradually picked up the frenetic comedic pace midway through Act I. Choreography by Shannen Banzhoff is crisp and clear for large ensemble numbers in the smaller space while still remaining faithful and sometimes identical to the tap rhythms from the original Broadway production.

The set, designed by Jim and Sue Eckel and Scott Ruble, features several simple backgrounds and detailed show posters to designate the various theaters and locations in the story. A wonderful scenic and blocking choice was placing the door to Max’s office on a separate, upper platform, so as characters were finishing scenes or songs by the door, the next scene change was already taking place in a blackout on the main stage to allow scene changes to go as fast as possible.

Costumes, designed and provided by Stephanie Allee, Jackie Rebok, Scott Ruble, Wanda Smith-Goshorn and Cathy, Hillary and Wayne Snesrud, for this production provided many unique requirements, ranging from showgirl outfits with pretzel belts and sausage headpieces to little old lady dresses and shoes for male ensemble members. The costumes were very similarly detailed to the iconic costumes from the original Broadway production and wonderfully period appropriate for the Golden Age of Broadway.

For a hysterical Mel Brooks musical sure to offend everyone (when they aren’t too busy laughing) and a great chance to watch a flashy, larger scale musical in an intimate venue, don’t miss The Producers at the Washington County Playhouse.

The Producers plays through February 25, 2017 at the Washington County Playhouse Dinner Theater and Children’s Theater – 44 North Potomac Street, in Hagerstown, MD. For tickets, call the box office at (301) 739-7469 or purchase them online.