Well-known to audiences for his offbeat 1972 novelty song “Dead Skunk (in the Middle of the Road)” and his appearances as the singing guitar-playing Captain Calvin Spalding on the popular TV series M*A*S*H, Loudon Wainwright III, now 70, takes a look back at his life and four generations of his family through stories, songs, and memorabilia in Surviving Twin, making its regional premiere in Malvern with a two-week run at People’s Light. Created and performed by the Grammy Award-winning singer-songwriter/actor, the touring autobiographical solo show, which he sees as a “posthumous collaboration” with his late father (acclaimed writer Loudon Wainwright Jr.), is not only entertaining but deeply affecting, with contents that are both personal and universal. This show really got to me.

The format is intimate, as Wainwright, in a cozy set designed by James F. Pyne, Jr., directly addresses the audience, interspersing selections from his father’s long-running column (“The View from Here” in Life Magazine) with his own related anecdotes and songs that explore the complexities and dysfunction of their father-son relationship. Under the masterful direction of Daniel Stern, the tone of Wainwright’s expressively delivered self-reflection gradually grows from the acerbic wit and anger of youth to the profound understanding and acceptance that comes with maturation, with the realization of how much he is like his father and the recognition that he is, in essence, his “Surviving Twin,” as noted in the eponymous opening number. He certainly has inherited his father’s gifts of poetic eloquence and astute observation of the human condition.

Among the most insightful and moving segments are recollections on the birth of their sons (the elder Wainwright, in his essay “Father’s Day,” admits that he “hadn’t realized how close all life is to sorrow;” the younger responds with a witty welcoming song to his own son Rufus, also a singer-songwriter, entitled “Dilated To Meet You”); on the loss of their beloved dog John Henry (the columnist again perceiving the thin line between life and death in “Another Sort of Love Story,” while the singer focuses with humor on the joy his pet gave him and the bond between them in “Man & Dog”); and on facing mortality, the flood of memories it brings, and the cycle of life that is repeated across generations (the father, in his poignant “Mad About Maps,” in which he admits that he’s “not ready;” and the son in his soul-baring “Song in C”—the closing musical revelation about his “favorite protagonist—ME!”). Wainwright’s beautifully-crafted series of points and counterpoints expresses the thoughts and captures the emotions of everyone who ever entered a new phase or faced a new challenge in life, loved a pet, or lost a family member (emotionally or physically). He speaks and sings out for all of us, and we can’t help but relate to his sometimes funny, sometimes heartbreaking, and always penetrating performance.

Throughout the show, Wainwright, first in casual everyday jeans and shirt, then donning a tailored three-piece suit with special significance, moves around the stage, accompanying himself on banjo, guitar, ukulele, and piano. The lighting on him, designed by Lily Fossner, goes up and down with the changing segments and shifting moods, while titles of his father’s articles, home movies, and pictures of his family are shown on a projection screen behind him to his left. By the time we see his last batch of vintage photos, we feel as if we know the people in them and have come to care about them, and him. They, and all of Wainwright’s stories and songs, trigger heartfelt memories of our own families, whether the relationships were rough (as in his case), or idyllic (as in mine).

Surviving Twin will have you enjoying Wainwright’s honest and tender storytelling, engaging vocals, and impressive musicianship, while reflecting on your own treasured remembrances or unresolved conflicts with the ghosts that haunt you. I cannot recommend this show highly enough, or thank People’s Light and Producing Director Zak Berkman enough for bringing it to us. 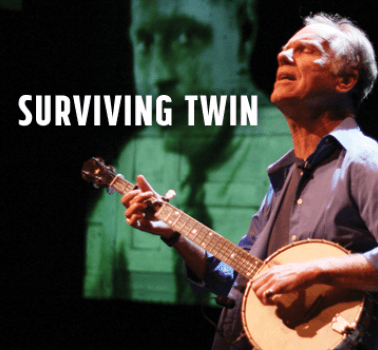