Jerry Blavat, “a Philadelphia borne dancer, radio and television disc jockey, performer, entertainer, producer and nightclub owner” (according to the program insert), produced his 38th show at The Kimmel Center, called Jerry Blavat’s Gospel, Soul and Doo Wop Reunion, on Saturday night. Blavat has worked in the music business for more than fifty years, and is best known for hosting radio shows which attract a large, loyal audience.

The show at Verizon Hall in the Kimmel Center was a walk down memory lane that featured greats of doo wop, soul and gospel music. It included a range of talent that mostly began performing in the 1950s and 1960s. Part of the appeal of the show is the dancing before and after in the Commonwealth Plaza. Immediately upon exiting Verizon Hall after the show, about fifty people continued the party and started line dancing to recorded music in the lobby. It was a joy to watch these dancers, Blavat’s “yon teens” of the 1960s and ’70s, enthusiastically and expertly move to the music.

The vocalists, many in their 70s or older, were impressive and could still sing very well. A couple of them had canes or walkers but that didn’t stop them! They were all dynamic performers, dancing as well as singing, and were entertaining and passionate. The singing was live, accompanied by an orchestra of violins, percussion, piano, and brass. There were some back-up singers behind the orchestra that joined in depending on the act. There were also electric guitars. Mike McCourt was the musical arranger.

Unfortunately, the balance between the orchestra and singers was uneven and the amplification distorted the speaking and singing voices at times. For some acts, the amplified sound was so loud that it was a challenge to appreciate their performances. The orchestra could have played half as loud, or the amplifiers turned down, so as not to overpower the singers or make the overall production uncomfortably loud.

Jerry commented between each act, and sported an impressive wardrobe. I gave up trying to keep up with it, since he changed after every number. He had a red suit, a silver suit, a sparkly blue jacket, a black suit, and other combinations. The performers included The Tokens, Dee Dee Sharp, Eddie Holman, The Dixie Hummingbirds, The Capris, The Chi-Lites, Ladd Vance and Johnny Gale (with a tribute to Kenny Vance and the Planotones), A Tribute to Johnny Maestro and the Crests with Tommy Mara, and The Stylistics.

My favorite song of the evening was “The Lion Sleeps Tonight” by the Tokens. This is one of the most popular songs recorded in the last sixty years in the United States. I remember my grandmother playing it often. It was launched in 1961 by the Tokens, and was based on a South African song written by Solomon Linda. It was reprised in The Lion King. The Tokens encouraged audience participation–I clapped and sang along with parts of the song. I was amazed and inspired that in his 70s, Jay Siegel (who sang the falsetto in the song) still sounds as good and fresh as he did on recordings and videos from over 50 years ago! Only three men were in the Tokens that performed in this concert, but they did so with heart and harmony.

Dee Dee Sharp was the only woman featured in this reunion (except for one member of the Chi-Lites). Ms. Sharp, who began her career at age 17, sang “Mashed Potato Time” and “Will You Still Love Me Tomorrow.” She began the latter song playing the piano and singing, and her voice is still strong and clear.

Eddie Holman wowed with “Hey There Lonely Girl” and “How Great Thou Art.” “Hey There Lonely Girl” gave him the chance to show off that he still has his high notes, and in “How Great Thou Art” he was able to praise the Lord in gospel style. He has been a pastor for the last 32 years, and in show business for sixty. In his bright red pantsuit and red boots, he projected a strong stage presence and commitment to his singing.

The Stylistics was the last group to perform. They sang “Rockin’ Roll Baby,” “Betcha By Golly Wow,” and “You Make Me Feel Brand New.” The group originally formed in 1968 in Philadelphia and at that time consisted of five men. Today there are only four members. Their relaxing mellow sound and synchronous dancing characterize their style.

Other songs that were performed during the evening included: “The Night I Fell in Love”, “Portrait of My Love, “I Love You, What More Can I Say?,” “Shadrack,” “I’m Going Home on the Morning Train,” “Great Balls of Fire,” “Morse Code of Love,” “There’s a Moon Out Tonight”, “Have You Seen Her,” “Oh Girl” , “Diamonds and Pearls,” “Cara Mia” , “16 Candles,” and “The Angels Listened In.”

The show ended with “You’ll Never Walk Alone” sung with emotion by Tommy Mara, and was dedicated to all the artists who were part of these groups but who had already passed away.

I feel extremely fortunate and honored to have heard these accomplished singers live, even in the twilight of their careers. Along with the songs that were performed, they are part of American musical history, and a national treasure. I went home and listened to them when they were in their prime, and have added their YouTube videos to my Favorites playlist. Kudos to Jerry Blavat for bringing them all together and pleasing his fans once again!
Running Time: Two hours and 45 minutes, including intermission. 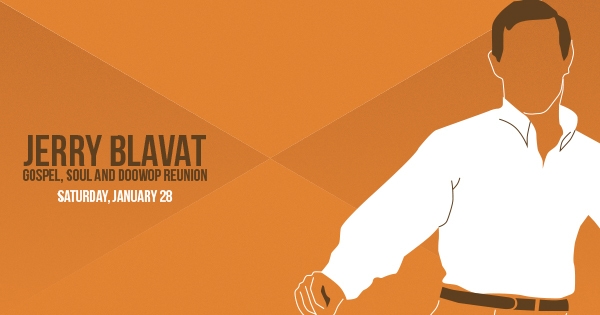 Jerry Blavat’s Gospel, Soul and Doo Wop Reunion played on January 28, 2017 at the Kimmel Center for the Performing Arts – 300 S. Broad Street, in Philadelphia, PA. For future events go to the Kimmel Center’s calendar of events. For more information on Jerry Blavat events, visit his website or his Facebook page.