I was so thrilled when Olney Theatre Center announced that David Benoit and E. Faye Butler were cast as Sweeney Todd and Mrs. Lovett in their new production of the iconic pie-filled Tony Award-winning Best Musical. In Part One of a series of interviews with the cast meet the man with the very sharp razors: The Demon Barber of Fleet Street – David Benoit.

Tell our readers where they may have seen you on the stage and your appearances on DC stages.

Hi! David Benoit here. Boston transplant now residing in New York City. I have been fortunate enough to be working predominantly in Broadway, Off Broadway, and National Tours. Most recently, I was seen In DC at the Kennedy Center with the “Spectacular New” The Phantom of the Opera as Monsieur Firmin. Other DC appearances include the National Tours of Avenue Q for 2 visits, Jekyll and Hyde, and in The Studio Theatre’s 2009 production of Adding Machine: a musical, with Jason Loewith and Chris Youstra.

Why did you want to play Sweeney Todd in the Olney Theatre Center production? When did they offer you the role?

I have always wanted to do Sweeney Todd. As a character actor there is rarely a role that encompasses everything about the human spirit. Humor, Pathos, Rage, Obsession, Horror on an operatic scope. Of course Sweeney’s methodology is beyond sanity, but when realizing it all stems from extreme grief from the loss of a loved one, it makes the role’s appeal from an acting stand point: hard to resist.

Jason contacted me in December of 2015. He sent me a message asking if I would be interested in jumping back in the sandbox and playing with Chris Youstra and him. Most directors would label me A Beadle. Jason saw me as Sweeney. I jumped at the chance.

Adding Machine was my favorite theatrical experience. I was ready to see if lightning struck twice. Phantom granted me a 3-month leave to come to Olney. Jason and Chris afforded me this dream opportunity, and I am beyond grateful to everyone involved.

Have you appeared in any other productions of Sweeney Todd?

I have not. There was talk about doing it while I was in college, but unfortunately it never came to fruition. Now at 51, I believe some things are truly worth waiting for.

How do you relate to Sweeney and Mrs. Lovett? What do you admire about them?

As a semi-sane individual, it is difficult to relate to these diabolical people. As an actor, we are responsible for empathizing with and humanizing these characters. We hold the mirror to the audience, seeing their own reflection, and hopefully, empathizing as well. We ask how the situation applies to them and invite them to join us on that emotional journey.

I think everyone can identify with the lengths one will go in the name of grief. Be it a parent, sibling, partner, or spouse, wanting to punish someone who is responsible for the loss of their loved one is pretty universal.

Sweeney’s means of revenge are heinous and unthinkable. However, in this current political climate, I believe people can identify with holding officials responsible for their actions. Though he is certainly unconventional, Sweeney is the underdog, and everyone likes a good underdog story.

How would you describe Stephen Sondheim’s score?

E. Faye is a force. A powerhouse. Yet, simultaneously possesses the delicacy to deliver a beautifully hushed and potent version of Sondheim’s “Wait.” She is the real deal. She is also wildly hysterical. Her interpretation is beautifully personalized, embracing being a woman of color in Industrial London. She is a first-rate actress and human being. We are extremely fortunate to have her on Fleet Street.

What is Director Jason Loewith’s vision of the show and his vision of your role of Sweeney Todd?

Jason is wise enough to trust this material. He realizes there is no need for heavy-handed concepts for a story so masterfully written, complete, and emotionally dense. Though traditional in his approach, Jason emphasizes the humanization of these characters. He embraces the trill, the horror, and melodrama with a grounded simple truth. The look of the show is a beautiful mixture of stark Industrial London architecture and modern minimalism. It is quite impressive. The production also has no shortage of blood. For me, it is absolutely a thrilling ride.

How has Musical Director Chris Youstra helped you with your performance and vocally?

Chris has a vast knowledge of this material. He generously personalizes his musical direction to accommodate the needs of his performers while still honoring Sondheim’s material. The end of Act 1 for me is a freight train speeding frenziedly down the track. Basically, 20 minutes of nonstop lyrical and bombastic singing and screaming. He tweaked tempos and, unknowingly, gave me a huge gift of reminding me how important is was to me that I humanized this man. He has influenced my vocal choices in that regard helping me achieve that goal, while preserving the voice for an extended run.

Why do you think Sweeney Todd is still so popular? What does the show have to say today’s audiences?

It is a complete and thrilling theatrical experience. It covers every emotion imaginable, while embracing taboo and horrible concepts, evoking laughter in spite of itself. The music is also gloriously haunting.

What would you say to a young actor who is preparing to play Sweeney Todd in his or her high school or university production?

Drink your water. Take your vitamins. Rest and try to stay healthy. There is much rage involved, you’re responsible for not inuring your fellow actors. 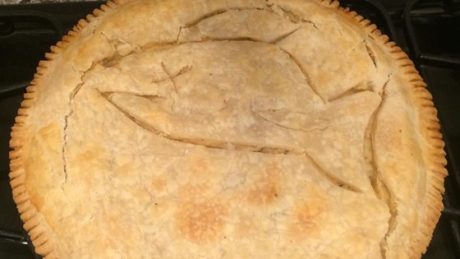 I come from a French-Canadian Family. There is a Christmas Eve tradition where my Dad would make two pies. French meat pie and Salmon pie. Salmon pie was my favorite. It consisted of Salmon, sauteed minced onion, mashed potatoes, and a lot of pepper. The mixture was mixed together and placed in a flakey crust.. Heaven. This past Christmas Eve I arrived home late from my travel from Phantom in Chicago. Sure enough, there was my pie…lovingly waiting for me in the fridge. Merci, Papa Noel.