Children’s Theatre of Annapolis’ production of Robert Louis Stevenson’s classic adventure story Treasure Island is a rollicking, exciting spectacle. Adapted by Ken Ludwig and directed by Jeff Miller, there’s lots of pirates, swordfights, and wrestling matches to entertain the whole family. It even has a surprising casting twist, in that many of the male characters are played by young women!

The action starts even before the curtain rises, with three pirates battling each other across the stage, using swords and an oar. There are many such scenes, including the opening, with Captain Flint (Miranda Dameron) and his crew violently interrogating another pirate. These battles are well-staged by Fight Choreographer James Yager, who makes them flow almost like ballet. They are beautiful to watch, especially Billy Bones’ (Rachel Leonovich) and Black Dog’s (Dave Martinek) fight, which starts with Billy leaping on top of Black Dog. Long John Silver’s (Arden Tierney) and his pirates’ battles against Jim Hawkins (Blanca Martel), and his friends are also visually stunning; Jim fights them off using chairs.

Blanca Martell and Arden Tierney give two of the strongest performances as Jim and Long John. They have an incredible chemistry together, and it’s fun to watch them play off each other, and see their relationship continually change, from protector and friends to mortal enemies and back again. Tierney plays Long John with a glorious swagger, full of a passionate zeal of life and a disrespect for authority.

Even though there’s more than a hint of violence as he “negotiates” with Captain Smollet (Haven Hitchcock) for the treasure map, it’s hard not to admire his confidence. He can talk his way out of almost any situation as well; he shames the other pirates for writing their demands on a page of the Bible, and calls out one of them for grievously misspelling a word. A larger than life character, he’s great fun to watch, reminiscent of Johnny Depp’s Captain Jack Sparrow in the The Pirates of the Caribbean movies.

Martell plays Jim Hawkins with a charming sweetness and innocence, with a core of bravery and ingenuity. Although he frequently finds his kindness taken advantage of, especially Long John, he handles himself capably. During a harrowing scene, another pirate (Cole Ruiz) chases him across the deck. And he is able to forgive those who have betrayed him. He is an excellent counterpoint to Long John’s scheming, devious nature.

Jim’s allies help round out the protagonist’s side. Siena Landerkin plays Dr. Livesy with great seriousness, offering advice and support in times of crisis. Catie Newell plays Trelawney a bit more lightly; he erupts in joy at learning of Jim’s treasure map, eagerly awaiting adventure and the possibility of danger. Haven Hitchcock gives Captain Smollet a commanding, authoritative presence. When he speaks to Long John demanding his and the other pirates’ unconditional surrender, his threats to take them out are completely believable. And Hannah Fishburne is very funny as Benn Gunn, a castaway on the island.

The pirates are a fearsome presence, both individually and as a group. As they tear through Jim’s tavern searching for the map, they rip the place apart. Blind Pew (Ryan McDonald) is menacing as bling pirate who wields his walking stick powerfully. Israel Hands (Cole Ruiz) proves that you don’t want to beat him at a game of cards. Billy Bones (Rachel Leonovich) brings a terrifying chaos to Jim’s tavern. Together, they are an excellent cast of villains, and they clearly enjoy this opportunity to be evil and sinister.

Alice Martinek has provided some terrific costumes. Jim wears a simple white shirt and pants, with a beige jacket. Long John has a gorgeous looking velvet coat and a jaunty tricorner hat, whike Dr. Livesy and Trelawney are dressed more elaborately, with Livesy wearing a ruffled white shirt and wig, and Trelawney donning a golden jacket and a long, cone shaped purple hat. Blind Pew has a brown tunic and a rag tied around his eyes, while Captain Smollet looks positively martial in a blue jacket and black pants.

Set Designers Todd Croteau, Bill Davis, Deb Furey, Stevie Magnum, and Luke Page have made the sets both beautiful to look and a playground for the actors to tell their story on. The deck of the ship is on two levels, perfect for the fight scenes. Jim’s tavern has many circular tables and chairs, a bar, and a fireplace, all for the pirates to destroy. Captain Smollet’s galley has a fireplace and a round table, with plenty of chairs for defense in case of attack.

Director Jeff Miller is fortunate to have such a wonderful cast and I admired his wonderful use of Jim as a clever framing device – having him reading from the source novel.

The Children’s Theatre of Annapolis’ entertaining Treasure Island is filled with plenty of action and adventure to please children of all ages. ARGH! 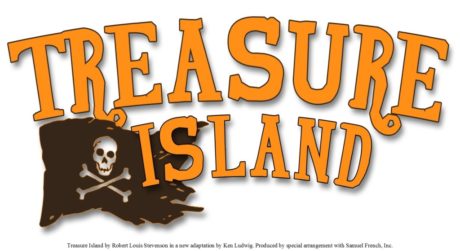