From Tevye the Milkman’s Anatevka of 1905 to the St. Nicholas Lutheran Church in Leipzig in 1724, Broadway conductor Ted Sperling is making quite a transition in settings this week. But it’s all routine for this most versatile of New York music directors who regularly switches up from musical theater to the concert stage and back again – always with a few interesting innovations.

Fresh off conducting the triumphant 2016 Broadway revival of Fiddler on the Roof, which closed December 31, Mr. Sperling moves over to Carnegie Hall this Thursday, February 9 for a performance of Bach’s St. John Passion with his vocal group MasterVoices, formerly the Collegiate Chorale.

The two-hour performance of Bach’s setting of the Gospel of John along with arias and chorales reflecting 18th-century Lutheran theology and what historians believe are Bach’s own personal religious interpretations will have some special touches reflecting a theatrical sensibility.

First, the performance will be in English, in a new translation from the original German by tenor Michael Slattery, who will sing the lead role in the St. John Passion as the “Evangelist” – essentially the narrator who presents the actual biblical text. Second, in a touch reminiscent of contemporary performances of Handel’s Messiah, the audience will be invited to sing along with the MasterVoices chorus during nine “chorales” that Bach interspersed throughout the story.

These sections are largely made up of lyrics that scholars believe might have been familiar to churchgoers at the St. John Passion’s premiere on Good Friday of 1724. Mr. Sperling has posted the music and new English lyrics to the chorales – including four-part harmonies – on the MasterVoices website. He’s even holding an open rehearsal the night before the performance for any audience members who want to practice. You can expect the style of the English to lean toward the conversational rather than the highly literary, as Mr. Slattery respectfully jokes about in a six-minute video preview of the event.

Whether in Washington or elsewhere, the St. John Passion is often performed as part of the season of a standard symphony orchestra, with the orchestra slightly modified for the special types of flutes, oboes and cellos that Bach specified. But Mr. Sperling has gone further, instead inviting a specialty orchestra entirely made up of a compact number of young professional players of genuine period instruments called New York Baroque Incorporated to provide the accompaniment. As Mr. Sperling explains it in the video preview, NYBI’s “darker, mellower quality” should provide “the sound I’ve always had in my head for this piece,” with the acoustics of Carnegie Hall waiting to carry the sound out to the house and up into the balconies.

The narrative structure of the St. John Passion calls for Mr. Slattery as the Evangelist to call out the text and yield to baritone Jesse Blumberg to sing the actual words of Jesus and bass Adam Lau to sing the words of Pontius Pilate. But the libretto also adds key solos or arias for two women and two men – in the case of this performance all drawn from the contemporary opera stage.

In particular I’m looking forward to the performance of mezzo-soprano Tamara Mumford, fresh off a run of the opera L’Amour de Loin (“Love From Afar”) at the Metropolitan Opera, who will sing the arias traditionally known as Von den Stricken meiner Sünden (“From the shackles of my vices”) and Es ist vollbracht (from Jesus’ last words, variously rendered as “It is finished” or “All is accomplished” or in other ways). How Mr. Slattery chooses to translate these texts into his own English version is part of the meaning and, dare I say, the drama of the evening.

One of the inherent tensions in any performance of the St. John Passion – just as it is in the rock opera Jesus Christ Superstar, where Tim Rice and Andrew Lloyd Webber clearly drew much of the language from the Gospel of John – are explicit references to “the Jews” juxtaposed with cries for vengeance and the demand for crucifixion. And even though Bach clearly isn’t rock music, many first-time listeners are surprised at how bold and even dissonant the specific rhythms and harmonies of this particular passion setting are (as opposed to, for example, Bach’s parallel St. Matthew Passion and most of his secular music).

The MasterVoices chorus will be called on to sing “Crucify” (in the original German, Kreuzige) many times in one of Bach’s more raucous outings, and even the very opening of the two-hour composition has slashing syncopations and clashing oboes above a churning figure in the violins. Personally, when I first heard the opening of the St. John Passion some years ago, I remember thinking, “Wait – this is Bach?”

Mr. Sperling and I have corresponded a bit on this, and you can expect the soloists and especially the full chorus in the big chorales to really emphasize the way that the non-biblical text included in this passion’s libretto transfers and generalizes the ideas of guilt away from specific parties and toward the entire congregation or “audience” (and by extension, all humanity). What also makes this particular performance fascinating is that it almost directly follows Mr. Sperling’s production of Fiddler, where the Jews themselves were of course the victims but which also used subtle devices to reflect victimization and otherness more universally.

For anyone who wants a deeper dive into these issues, just last month one of the most comprehensive (and superbly well-written, even entertaining) reviews of these matters that I’ve ever seen – regarding not only the lyrics of the St. John Passion but literally how the notes that Bach wrote contribute to the story – was published by The New Yorker’s music critic Alex Ross as Bach’s Holy Dread. Of course there’s always a way to check out the St. John Passion in the original German with some basic though not comprehensive English subtitles. But it’s not live, in English, at Carnegie Hall. I’ll be there this Thursday, and I look forward to both the performance and the effect that having real theater people involved has on the entire experience.

LINK:
Review: ‘Fiddler on the Roof’ at The Broadway Theatre in NYC by Richard Seff 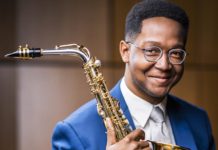