Henrik: You left quite an impression portraying the Artful Dodger in Oliver! (2009) and Peter in Peter and the Starcatcher (2016) — both at the Walnut Street Theatre. Seen from the perspective of Peter Pan, you said in an interview with Kelli Curtin, “As a kid it is a really cool story because I was mesmerized by the idea of not having to grow up . . . I hated the concept of having to become an adult.” Now that you are older, how do you see the Peter Pan syndrome?

Brandon: For the most part, my answer is unchanged. Life can be awfully boring being a grown-up. I think being childlike gives you freedom. I think that in all of us there is a certain child. This is where we hold creativity, imagination, determination — and love for life.

You were also quoted as saying, “Peter does not really have anything to connect to. I really feel Peter feels this isolation and it is similar to what I felt growing up.” Does this sentiment still describe your experience or have things changed for you?

As of now, I feel this more than ever. I just graduated from college, and I’m looking into the next chapter.

Connections are key, and relationships are essential. That being said, it’s a transition period for me. I’m letting go of old, and welcoming the new.

You are now entering a new phase, playing Romeo, one of the world’s most famous roles, in Romeo & Juliet. What was your initial reaction to the invitation by the Media Theatre and what have you done to prepare for this demanding role?

It’s a daunting role for sure! I felt truly honored to be offered the chance to play such an iconic role as Romeo. Apart from memorizing my brain to death, I’ve been studying the world of Shakespeare.

Describe your work with Juliet and the cast.

I am very happy to say that it’s a solid group of people. I feel that everyone is truly happy and eager to be there. Lexi [Gwynn who plays Juliet] is a joy. It’s been wonderful getting to know her more.

Bill Van Horn directed Peter and the Starcatcher and now Romeo & Juliet. What was similar and what did he do differently directing you in this Elizabethan play?

Bill is at home with Shakespeare, so that said, it has been a very smooth process. Starcatcher was a tough show to do. It was incredibly complicated, and it generally took a ton out of me. Romeo & Juliet is a bit different. While yes, it is a tough show to do, and by no means is it easy, I find that we are focusing more on the intricacies, as opposed to the extremely broad strokes of Starcatcher.

We started off the process for Romeo & Juliet with a pretty strong idea of character development, whereas with Starcatcher, that development was a huge part of the rehearsal period.

Honestly, Bill is a joy to work with. He is very involved with the actors, and genuinely cares about the show to an extent that I’ve never seen before in a director.

Tell us about the Romeo that you would like to present.

I think that Romeo is a tough role. On first glance, many, myself included, may find the character to be a bit hollow and one-dimensional. However, I am finding the depth to his character, something which is not easy to do. I want to portray Romeo in a way that shows what makes him tick. If you delve further into him, you will find that he’s a very complex character, but you must pay close attention in order to discover this. I’m really excited to bring this new Romeo to life.

Looking back at your earliest roles during your childhood and as a young adult, how much of your own world are you bringing into your performances — not only as an actor, but also as a mensch who reflects on life?

Acting is a learning experience. Everything from my childhood till now defines the genetics of the roles I play. While my life may be very different from one like Romeo’s, my past and my experiences allow me to understand how someone like this thinks.

Even though Romeo & Juliet is a tragedy, could you tell us a bit about some of the lighter moments of this production?

Well, truth be told, there are so many jokesters in this cast. Everything from the rehearsal studio to getting on the stage has been so much fun. We have also found a ton of opportunity to incorporate humor into this piece.  It makes the story more interesting and easier to follow.

For many young people, this production of Romeo & Juliet at the Media Theatre may well be their first encounter with live theater and with Shakespeare in particular. There may be lonely kids in the audience, teenagers who may be asking themselves lots of questions. Based on your experiences, what would you say to them about the importance of theater as a way of building community and moving forward — together?

Theatre is a wonderful thing for many reasons, but the most important in my opinion is the ability it has to include people, no matter their age, gender, race, height, or where the notch is in their belt. That’s huge for students. Theatre is a place where they can just fit in and be themselves.

If there is one thing that I want younger people to take away from this, it’s the knowledge theatre has so much to offer them, not only in terms of the art form itself, but also in terms of its ability to help young people find themselves.

I am very grateful for the theater audience response and for the critical acceptance. 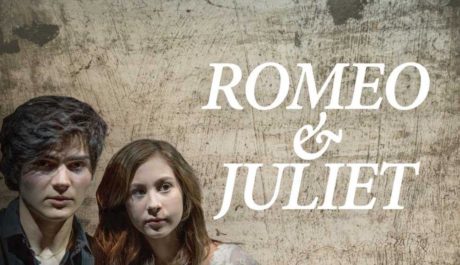 LINK:
Review of Romeo and Juliet at The Media Theatre by Ellen Wilson Dilks.