Politics, laughter, and lunacy come together in this lesser known Neil Simon comedy, Laughter on the 23rd Floor which opened last night at Laurel Mill Playhouse. Directed by John D’Amato and produced by Maureen Rogers, guffaws abound in this semi-autobiographical play by one of America’s funniest playwrights.

The setting is a comedy writer’s room in the early 1950s in New York City.  The backdrops are the peak of the McCarthy era, the proliferation of nuclear weapons, and the infancy of television. This was a time when there were only really three networks. As the focus of the networks moved from large metropolitan area to more rural ones, there was less interest in topical and smart comedy and more of a demand for inane sitcoms, quiz shows, and formulaic dramas.

Lucas (Michael Parks) acts as narrator and part of the hilarious group of writers who work for the unpredictable, but brilliant, comic actor Max Prince (Jeff Murray). The characters are based on the true wits that Simon worked with on the Your Show of Shows at the start of his career. Lucas is the mirror for Simon, but Mel Brooks, Larry Gelbart, and Carl Reiner are all represented in the group. The others may not be household names, but all were a big part of American comedy both on the tube and on the screen. The leader of the group, Max, is Simon’s unapologetic view of Sid Caesar who starred in the real television show, and was known for his unstable behavior as well as his genius.

Murray is top-notch as Max as we watch this famous man go from a megastar for his network to the predictable end. Murray’s sterling performance reaches its peak at the climax of the show, when Max, drunk and depressed, addresses his staff of writers. I never for once doubted that Max was highly inebriated even when the character became a little more rational.

The supporting cast does a fine job of creating several nuanced performances. They all capture the hard New York personae. Even those not from the Big Apple bring that tough exterior that was needed to survive in a world where writers were blacklisted and people thought we would all be nuked very shortly. John Dignam as the wise cracking Milt Fields delivers his comedy perfectly. Win Britt, as the perpetually late hypochondriac, Ira Stone, does a hilarious Woody Allen-type character (hint: not based on Allen but another famous comic), and had me laughing from his entrance at the middle of Act I to the end of the play.

Debra Kidwell is the hard-talking and only female on the staff, Carol. Again, Kidwell blends in with the foul-mouthed group without losing her femininity.  She even made me laugh about Joe McCarthy.

Adding to the uproar with standout performances are Joanna Andrus, as the more grounded Kenny, Tim Evans as Russian born headwriter, Val, Bob Herbertson as Brian Doyle, the only Irishman of the group, Michael Parks as Lucas, and Miranda Snyder as the not-so-bright secretary, Helen.

John D’Amato’s direction keeps the pace flowing quickly. The set by D’Amato and Mark T. Allen and lighting by Bob Frank capture the starkness of this very important, but not very expensive, room that housed of some the best comedic minds of the 20th century.

Don’t let the timeframe fool you. This play that talks about power gone amuck and Soviet-phobia remains relevant in today’s world.

With zingers by the dozens and a great cast to deliver them rapidly – you are in for a great time! So climb aboard at Laurel Mill Playhouse and take this elevating ride to Laughter on the 23rd Floor. 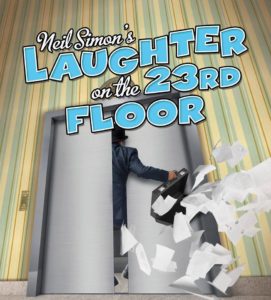