What’s the nature of trust? What specifically makes a person choose one partner over another? These questions and more are brought up by Fells Point Corner Theatre’s production of Trust, by Steven Dietz. Directed by Michael Byrne Zemarel, who also acts in the show, Trust is a frenetic, multiple character study of the lives of young artists and fans involved in rock music in the 1990s.

he show, which evokes the Seattle grunge scene of the early 90s, is populated with interesting characters who live in a series of scenes introduced verbally by various characters announcing “Title,” then the scene name. The characters include fading star Leah Barnett (Laura Malkus), who achieved fame before she was ready; rising rock star Cody Brown (the always talented out-of-this-world David Shoemaker) who is engaged to Becca (Valerie Dowdle); Love shy Gretchen (Rachel Roth) who goes slowly when meeting potential romantic partners because of a failed relationship with Leah; Holly Porter (Cassandra Dutt), a gum-smacking groupie who is a pain in the neck to everyone she deals with, and nerdy Roy (Zemarel), a radio DJ at the fictional WDOB station with a show called The Twilight Nocturne,” who has an unrequited crush on Holly.

In the first titled scene, “Do I Really Look Like I Need to Be Told Another Story?, Roth’s Gretchen had a good monologue about how she spied Becca at a boring lunch date, all the while with Dowdle’s Becca sitting alone, house right at a small table miming her half of the conversation.

Shoemaker’s Cody and his fiancé, Becca had a cozy scene establishing their relationship in the next scene “He Never Once Said a Thing.” Things heated up in the next scene “Do You Want to Have a Night?” in which pity-party-having ex-rock star Leah met up with Cody to talk about the music business—and more.

In “You are My First,” the fourth scene, Gretchen and Becca got to bond as Gretchen was in the process of designing Becca’s wedding dress. Zemarel’s Roy described, in his own nerdy way, observing Holly doing her laundry in the next scene, “It is a Laundromat Meeting.”

To open the second act, Zemarel, who recently directed Shoemaker in All My Sons at Vagabond Players (and was honored by this publication for Best Direction in Plays), had a hilarious monologue about his nervousness around women and how that nervousness makes him steal things—while pulling out various stolen objects.

“The Engineer Looks Up,” the seventh scene, saw Cody and Leah being interviewed on the radio by Roy. After that scene, it was increasingly apparent that Cody and Leah were proving to be kindred spirits—good for them, but not so good for others. Cody and Becca’s verbal fight was among the strongest scenes I’ve witnessed this year.

As the story progressed, it became evident that a lot of uncoupling and new coupling would take place. In the eighth scene, “It Was Nostalgia”, Leah, Holly and Gretchen gossiped about their mutual friends’ romantic lives, and advised Gretchen to take charge of her love life. In the scene after, “I Didn’t Know How or Why,” Gretchen made a reveal to Becca that was exciting but not surprising. Following Gretchen and Becca’s air clearing, the scene “After You” showed Cody and Becca in a sweet scene in which he shaved her legs.

Shoemaker, whom I’ve covered in several plays the past year, is the type of actor you are sure you’ll see hit the big time. With his deft mastery of every nuance of the characters he inhabits, from vocal inflections, to body language to how he effortlessly handles on-stage “business,” Shoemaker is truly “That Dude,” among DMV actors. Dowdle and Roth were excellent in their roles and had impressive chemistry together. Malkus was spot on as a fame-weary, “imposter syndrome” suffering musician.

The show was musically punctuated by the steady guitar strumming of the shades-wearing, non-speaking character, The Musician (Actor\Playwright Mark Scharf) and by Shoemaker and Malkus’ singing.

Trust is an enjoyable trip down the 90s memory lane, good for serious theatergoers, and students of the craft of acting, because this cast sure can act! 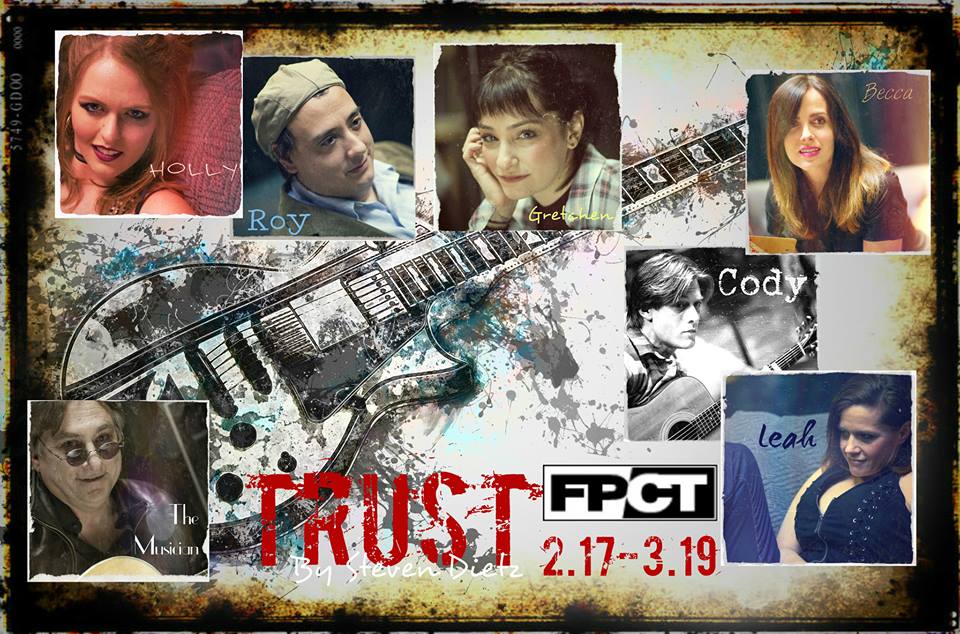