Compass Rose Theater does it again with another smart and dramatic production. God of Carnage is remarkable, this time with Director Steven Carpenter at the helm. Lucinda Merry-Browne is the Producer and Yasmina Reza is the Playwright.

God of Carnage is about two sets of parents, one whose child has hurt the other, at a public park. The parents meet to discuss the matter in a civilized manner. However, what is supposed to be civilized ends up taking a turn that is though-provoking, humorous, and out of control.

Veronica (Jeanne Dillon-Williams), the mother of the son who was hit with a stick. Not only is she protective of her son with words, but her tall stature and stiff folded arms only begins to demonstrate she is ready to pounce the issue head on. She moves with purpose from the sofa to leaning over the bar, or as she cleans up the dishes, Williams struts from one end of the stage to the other. She has a knack for delivering snappy prose and her presence on stage is palpable.

Veronica’s husband Michael is wishy-washy as he moves with hunched shoulders and large strides while flipping back and forth between agreements. He backs up his own wife, then turns it around and is empathetic with Annette’s side of the story when she doesn’t feel well. Gallagher’s Michael is gruff about both the boys, as to whether they should work it out on their own, and is brusque when he talks about his own childhood fights. Michael is a frustrating character but Gallagher does that well with his “matter-of-fact” ability as an actor.

Annette (Miranda Zola), the mother whose son hit the other boy with a stick, is reminiscent of a skunk. Believe it or not, Annette, like skunks, are mild-mannered but have a built-in defense mechanism and it is apparent as she scrunches ups her shoulders with a very sour-looking expression then has a drunk-as-a-skunk hilarious scene. The symbolism of the skunk is to do no harm but we must defend ourselves effectively, without causing further conflict. A message that was mentioned during their discussion. Zola is terrific in the role as her character breaks out of her shell and offers up comic relief on a silver platter.

Annette’s husband Alan (Nigel Reed) presents an imposing physical presence like that of a bear – a gentle one, but when provoked, he will fight back. Alan does so when the subject of his cell phone comes up. “All the time, from morning to night,” as Annette proclaims. It’s true – every 10-15 minutes Alan is answering a call from his office. It is in his words and terse tone that shows how much he is plugged into his work and not his family. Reed really makes Alan an unlikable character and that’s is kudos is his acting talent.

The set is a simple rendition of a contemporary living room in Brooklyn with a corner bar, sofa, and chair. The coffee table is stacked books with a piece glass going across. A vase of tulips stand atop a pedestal that is adds a nice pop of color. A magnificent sculpture hangs above the set that was designed by Jane Knuth , and is open for interpretation. lighting design enhances the actor’s performance as well as the art sculpture, that changes color with the mood of the conversation.

Christina McAlpine’s costume design are fitting for each character’s personality. Veronica is comfy in pants, a blouse and a flowing sweater vest while Michael wears trousers, a shirt with a pull-over sweater. Annette and Alan are dressed in business attire. Alan wears a suit and Annette’s navy-blue knee-length dress is attractive.

God of Carnage is a play for our time that spawns more questions than answers about parenting, protecting our children, and managing adult relationships with each other. The rules have changed in the 21st century. One boy hits another with a stick, after being provoked – Were his actions justified? Should the parents intervene? Be sued? Or let the boys work it out? This production raises questions with grit and passion.

Compass Rose Theater’s God of Carnage is a brilliant production that is zany and entertaining. It is performed by a stellar cast and helmed by a visionary director. Don’t miss it! 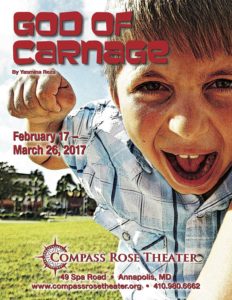