“It’s Shakespeare! Which is like algebra on stage!” If you’ve ever struggled with The Bard, you’ll appreciate the character Gary Peter Leftkowitz’s sentiments on the subject. In I Hate Hamlet, by Paul Rudnick, the cast and crew of Dundalk Community Theatre (DCT), directed by Tom Colonna, explore the trials and triumphs of acting Shakespeare. This play covers it all from the difficulty of the language, to the pressure of portraying an iconic character, to its effect on an audience. This delightful play is packed with references to charm any theatre geek, but is also chockfull of its own charm to amuse any patron.

I Hate Hamlet follows TV star Andrew Rally who has just had his show cancelled, and has now been cast as Hamlet. He struggles with his insecurities as an actor and whether he should he even do the part. Friends who both encourage and discourage Andy from taking the role for their own, often selfish, reasons surround him. To complicate matters, John Barrymore arrives to give Andy a little help with his new role. Act I takes place right before rehearsals start, and Act II picks up on opening night.

This production was simply fun all the way through, with the audience laughing from start to finish. The ensemble came together and played “out there” characters with grounding. Jennifer Skarzinski who played Andy’s real estate agent, Felicia Dantine, did a nice job of playing a big character without becoming over-the-top. Skarzinski’s Felicia had loads of colorful pizazz that had the crowd laughing every time she was on stage.

Deirdre McDavey is Andy’s Shakespeare-obsessed, waiting-till-marriage girlfriend who is his constant motivation throughout the play.

Emily Morgan’s performance as Deirdre was light and sweet with a touch of whimsy, which was perfect for the role. Veteran actor Regina Rose played Lillian Troy, Andy’s agent. She was another fun character, brassy and bossy, but with a lot of heart.

Charlie Lidard’s portrayal of Andy was earnest and seemingly effortless. As the focal point of the play, there was a lot of attention on Lidard, but he just was Andy. Even in silly moments like his “preparations” to perform his soliloquy were completely believable.

The other focal point of the play was, of course, Barrymore, as played brilliantly by Thomas “Toby” Hessenauer. John Barrymore today is a legendary character, and Hessenauer filled those shoes with exuberance, gusto, and gravitas. Just ask the ladies behind me during intermission who were praising his voice and performance. And I must agree with them. Hessenauer’s voice just boomed with authority onstage, and when he performed the classic “Speak the speech” speech from Hamlet he had the whole audience’s attention.

I give a big tip of my hat to Marc W. Smith, who was the scenic, lighting, and sound designer for I Hate Hamlet. Each of his designs were excellent. I was very impressed the moment the curtain rose to reveal the set, which looked so professional and was ornate. The scene and tone were so well set by the marble fireplace, the antique-looking windows, and all the bits and bobs that make a set look lived in. And it was even more stunning in Act II once “Andy” had redecorated. I noticed that even outside one of the doors there was new furniture. Such small details make a huge impact. 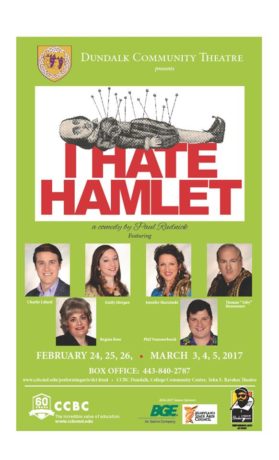 The sound was so good, the music was well-timed, and perfectly added drama and tension where needed. But I was honestly more impressed by the quality of the sound. It was consistently loud and crystal clear.Smith’s lighting added tons of excitement, too. He didn’t stray away from a few really flashy, dramatic moments like Barrymore’s entrance, and the magical lighting of the fireplace and candles.

Eva Grove’s costume design was great, and only got better. Each costume was perfectly rooted in the character’s personality. For example, when Gary came out, ready for opening night in a suit with a bright red vest…and bright red skate shoes to match. It was a great moment. Of course, Barrymore’s costume cannot go without praise. It was lush and flashy, and so Barrymore. Deirdre’s Ophelia ensemble was also drool-worthy for any fan of the Renaissance. It was beautiful – the colors, the bows, the hairpiece. And it was a very amusing character touch to have her in anachronistic striped socks underneath it all.

And there was a sword fight! This play truly had it all. Fight Choreographer Robert W. Oppel created a dynamic sword fight by utilizing the whole space – over the couch, behind the chair, on top of the couch – very cool.

Dundalk Community Theatre put on an excellent show. So if you need something to brighten your weekend, I highly recommend I Hate Hamlet.