Fangs for the Memories

The Women by Clare Booth Luce, which opened on Broadway Christmas week in 1936 after its premiere in Philadelphia three weeks earlier, and included an actress named Doris Day in a minor role, was an anomaly for its time – it boasted a large, all-female cast of 44 characters including a Cigarette Girl.

Broadway could afford to hire an all-female cast, especially since it was perfectly acceptable to pay a female significantly less than that paid to a male in a similar job. That part hasn’t changed much, but it can be argued – pro and con – that women have changed.

It will leave the audience asking themselves afterward if they just witnessed a dramatic comedy or a collective tragedy with scathingly funny punchlines. Emphasis on punch.

An all-woman cast, then as now, sounds like a strong platform for feminism – and a dilemma for a marketing department trying to attract men to view the performance. They needn’t have worried. The guys in the audience rarely stopped laughing. Loudly.

In actuality, the script takes a massive swing at both genders. Though not a single male actor is seen during the performance, males emerge just as scraped and tarnished as the females. Few of the characters are entirely savory, and “advice” that is dished out during the show is just as chilling – and poorly advised – then as it is now.

Part of the fun of the intimate setting of Spotlighters, with the audience of about 80 people seated on all four sides of the stage, is the feeling of being part of every scene, if not an outright nosy eavesdropper. 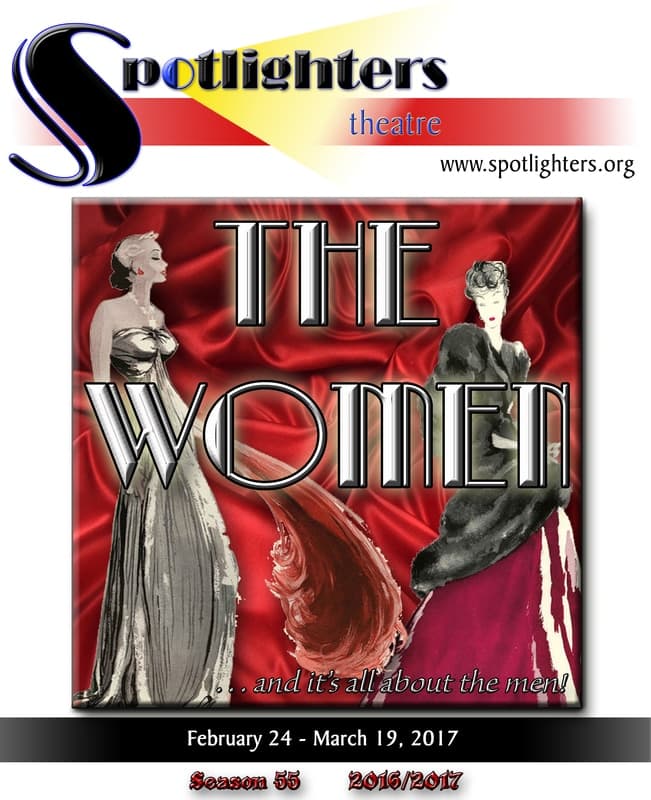 The audience also watches in fascination as, in semi-darkness, between scenes Fuzz Roark and his band of stage elves, including Stage Manager Lanoree Blake, hustle huge pieces of furniture – even a bathtub! – on and off the small stage.

The stage floor at Spotlighters is remarkable in that, in every production this reviewer has attended, it is different in color, texture, and pattern.

The floor for this show was painted to resemble a terrazzo tile floor set in an Art Deco pattern bordered with slender bands of metal inlay. It complemented the four permanent columns, this time painted a pale pistachio green and decorated with stenciled stylistic floral motifs. Benches at the base of two columns are moved after each scene and “re-dressed” by the stagehands to suggest rooms in a Park Avenue living room, a salon, a dressmaker’s fitting room, a bathroom, a Reno ranch house and more. Plus, there is plenty of space for the hefty furniture – and the occasional wild catfight scene, thanks to Fight Choreographer Nick Morrison.

Zemla’s set was enhanced by the Lighting Design of Kerry Brandon and Lanoree Blake’s sound effects, like that of a newborn baby nursing, were perfection. Associate Director Stephy Miller and Roark also served as Board Operators.

The more than 200 costumes were designed or assembled by Andrew Malone, Amy Weimer and Darcy Elliott. The outfits echo the era without being carbon copies. Hair and Wig Master Andrew Malone had his hands full with the show’s dozens of wigs.

Michele Guyton beautifully, realistically handles the emotional role of the central character Mary Haines, also known in proper society as Mrs. Stephen Haines. She poignantly portrayed a woman in upper class Park Avenue society of the mid-30s who, beneath the cracking veneer of  a one percenter’s smug superiority, is, most of the time, a decent person.

The show opens in Mary’s Park Avenue living room. She is not present but four of her gossipy friends are catty and vicious in that saccharine sweet way of upper crust Park Avenue society matrons who survived the Stock Market crash of ’29. (And, no, when it comes to the class exuded by these dames, The Donald, Melania, Ivana, Marla, and Ivanka don’t come close. Besides, the Trumps live on Fifth Avenue above a tacky shopping center.)

Jane, Mary’s Irish maid, quietly serves them as they chatter and verbally claw their hostess – and their husbands’ various abilities or lack thereof.

Bishop’s portrayal of this shallow she-devil is an over the top caricature of the self-impressed Mayflower Society ladies of the ‘30s – and more recent Queen of Mean, Leona Helmsley.

Sylvia, who speaks with the arch Park Avenue high society accent of that gilded era (kudos to Accent and Dialog coach Sherrione Brown), admires her sleek, turquoise-sheathed figure in a mirror and lauds herself for having a Cesarean section but keeping her figure. In the next breath, she claims Edith’s husband had recently tried to grab her. When Edith protests, Sylvia falsely retorts: “I never say behind my friends’ backs what I say to their face.”

The digs and counter digs mount. The women cattily comment on Mary’s emerging “smile lines,” prompting Sylvia to say in false innocence to Nancy: “I’d rather face a tiger than what critics said about your last book.”

Mary emerges. She’s been busy with her two children, Little Mary and Stevie. All is sweetness and light. Her marriage is wonderful; her children are the best; she is patient, understanding and loving.

10-year old Molly Ross portraying Little Mary is a heartbreaker as she witnesses and reacts to the drama ahead.

Pulling Edith aside, Sylvia giddily tells her a secret. She heard it from her manicurist, who cares for the nails of all proper Park Ave princesses. They devise a way for Mary to learn the secret, too.

Shortly after, Mary unwisely follows the advice of her wry, dowager mother (Ilene Chalmers as Mrs. Morehead) and friends: She decamps from her overheated social circle for several weeks and leaves town.

Meanwhile, taking her seat in the beauty salon chair, Suzanne Young as society columnist and star-maker Countess de Lave is getting her hair bleached. She is childless and been through multiple marriages. She is yesteryear’s version of Nikki Haskell, minus the botox and fake diet pills. The Countess, too, gets the gossip – and prints it in her widely read society column.

Upon Mary’s return, she heads to a dress shop and, while there, encounters a common, working-class girl Crystal Allen (the sultry Kellie Podsednik), who is buying some outfits, too. The seamstresses, fitters and garment models eavesdrop on their meeting with glee.

Ultimately, the show shines a light on the social inequalities between the haves and the have-nots. It also focuses on friendship. Who, among The Women characters, is a good friend and who is toxic? Who is a good mother, wife and partner – and who is not? What does it take to stay in a relationship – or leave?

What comments will set off a really good cat fight?

And, the men? While the show has no visible male characters, by the show’s end, several are as well-known as their female counterparts. You probably don’t want to engage them on eHarmony.

The Women plays through March 19, 2017, at Audrey Herman Spotlighters Theatre – 817 St. Paul Street, in Baltimore, MD. The theater is accessed through an entrance on the building’s right side. For tickets, call the box office at (410) 752-1225, or purchase them online.