Making the transition from high-school graduation into adulthood can be a challenge, especially for teens who haven’t quite yet found themselves. Ken Urban’s Nibbler, a world-premiere production by The Amoralists at Rattlestick Playwrights Theater, takes a funny and “dirty” look at the growing pains of a group of five not-so-mature friends in a coming-of-age sci-fi parody that takes liberal artistic license with recollections triggered by the music and memorabilia from that pivotal age and time.

Set in Medford, NJ, mostly in the summer of 1992, Urban harnesses the tradition of scary mythical creatures purported to inhabit the local Pine Barrens (e.g., the legend of the Jersey Devil), as the eponymous alien takes a bite out of four of the friends, one by one, instantaneously changing each of them. Directed by Benjamin Kamine, the over-the-top fantasy often extends into the gross and gratuitous (they don’t call themselves “The Amoralists” for nothing!), as the young characters explore sex and foul language, drugs and alcohol, to a soundtrack of rock hits from the period. They make the usual bad decisions, but beneath all of their physical excesses, they struggle with some serious issues, many of which are revealed as they repeatedly play “tell me something honest” – only to laugh childishly at themselves and each other for being “so fucking sincere.”

The engaging cast of emerging actors fully inhabits the roles, successfully capturing the characters’ youthful spirit, distinctive personalities, and inner turmoil with fast-paced dialogue and side-splitting burlesques of all-too recognizable teenage behavior. Rachel Franco as Tara, Spencer Davis Milford as Matt, and Sean Patrick Monahan as Pete all offer early undeniable hints of who they are and what they will turn into after their encounter with the Nibbler. Elizabeth Lail is a stand-out as Hayley, the high-school beauty with a penchant for fine clothes and ridiculously contrived sex talk; her delivery is spot-on and her post-Nibbler development is absolutely hilarious. And James Kautz as Adam delivers a combination of ferment, distress, sensitivity, and nostalgia, as he looks back on his old gang and revisits the times they spent together. Rounding out the ensemble is Matthew Lawler as Officer Dan, who epitomizes the ultimate outcome of bad choices, adolescent fixations, and the inability to move on to maturity, thereby serving as a wake-up call to the teens (and, by extension, to the audience). Together the group shows us, in actions, words, and in their performance of Urban’s original song, the ‘highs’ and lows of what it’s like “When You Are a Person.”

Anshuman Bhatia’s scenic design, with props by Zach Serafin, encompasses the vintage diner, dark woods, and family homes where the friends hang out, with visual projections that set the site and dates. Sound by Christian Frederickson and lighting by Christina Watanabe distinguish between the normal everyday locales and the creepy arrival of the mysterious alien, brought to life by Puppet Designer Stefano Brancato. Lux Haac provides age- and character-appropriate costumes, from the guys’ rock-band tee-shirts to Hayley’s tasteful pearls.

While several of the more salacious scenes elicited a loud collective “ewwww” from the audience (and me!), if you are not averse to raunchy humor, explicit obscenities, full nudity, and juvenile sexual situations, Nibbler will keep you wildly entertained by its exaggerated shock value and then touched by the underlying theme of facing the road ahead, leaving the past behind, growing up, and becoming the person inside of you, as we all must eventually do. 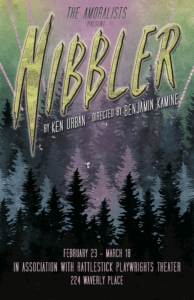 Nibbler plays through Saturday, March 18, 2017, at The Amoralists, performing at Rattlestick Playwrights Theater – 224 Waverly Place, NYC. For tickets, call the box office at (212) 627-2556, or purchase them online.