Come April 7th, it will be a full century since the United Stated entered World War I or The Great War as it was known until WW II came along. The Air and Space Museum here in DC is having an exhibition including a marvelous selection of movies related to WW I.

But for those of us with a live theatrical bent wanting to encounter a production that is an absorbing, daring, imaginative, and straightforward about the aftermath of The Great War, and any war, I suggest, a visit to the Shakespeare Theatre Company is in order. It is there, and for a limited time, that audiences can savor a moving exploration of what happen to those witness war. It is The Select The Sun Also Rises created and performed by New York City’s Elevator Repair Service (ERS).

Walking into the Lansburgh Theatre, I couldn’t image how Ernest Hemingway’s 1926 literary classic about living with fatalism as your watch-word, The Sun Also Rises could ever be adapted into a vital theatrical performance without losing its “life-force” essence. What would Director John Collins do? What would be removed or made plain-vanilla? A bull fight on the stage? Really? I just could not conceive how Hemingway’s lean, spare language style would keep me engaged after a period of time. A book is one thing, I could turn the pages if I got bored, but a live production.

Let me start with this, that for me, the Elevator Repair Service production is way more than a play about a group of hard-drinking American and British expatriates traveling about from France to Spain, not long after the end of WW I. I took in the ERS production as one focused on any young men and women who were haunted by war time service. The production was not about “ex-pats” as much as angry wounded warriors suffering from PTSD who had experienced the first modern war. People who wondered what purpose their lives had after they personally witnessed combat that ended their innocence.

I got hurt in the war. I said.

We would probably have gone on and discussed the way and agreed that it was in reality a calamity for civilization.

Could their lives be honorable any-more? What, if any, codes of living existed anymore? Was everything just quicksand, and if so was living for “the” moment all there was left? How does it feel to be on your own after coming into contact with death and maimed lives?

Listen, Robert, going to another country doesn’t make any difference. I’ve tried all that. You can’t get way from yourself by moving from one place to another.

For Hemingway’s “lost generation,” their hard-drinking and “without love” sexual encounters were just their easy-to-find numbing, or enlivening, drugs of choice. There were few others available to them in the 1920s. Alcohol and sex were cheap and readily available.

I was a little drunk. Not drunk in any positive sense but just enough to be careless.

What the Elevator Repair Service production did for me was to provide focus on verbal, visual, and aural invective: WASP superiority, Jewish sense of inferiority (“He had a hard, Jewish, stubborn streak”), the need for nasty, regular clashes as if it was foreplay to feel alive and manly; along with the cruel nature of fake detachment when what is wanted is an intimate, life-affirming connection to feel worthwhile.

You know it makes one feel rather good deciding not to be a bitch.” [To be followed by] “Isn’t it pretty to think so?

For the characters depicted in The Select: The Sun Also Rises, the questions were always:” Why get caught up in the allusions of love, when life is fragile, can either maim you, or end your life unexpectedly by an unseen bullet?.” Be impulsive. Live for the moment.

The ERS does great justice to Ernest Hemingway. As for my fear that the bullfighting scene would be zipless. Well, the depiction of bullfighting and two particular matadors is particularly powerful with a nice touch for visual humor and an announcer’s voice of God ala Vin Scully. I felt Hemingway’s love for and admiration of the sport and its theatrical art form. I saw as a metaphor the near miss of a bull’s horns as like the near miss of death in some God-awful WWI trench. It’s exhilarating since the sound of a bullet going by is heard, if you live.

So take advantage of ERS’s The Select: The Sun Also Rises at Shakespeare Theatre Company. You will come away knowing life did not go on without you.

Listen, Jake, as he leaned forward on the bar.

Don’t you ever get the feeling that all your life is going by and you’re not taking advantage of it?

Please see Elevator Repair Services’ The Select: The Sun Also Rises for yourself and mull it over. 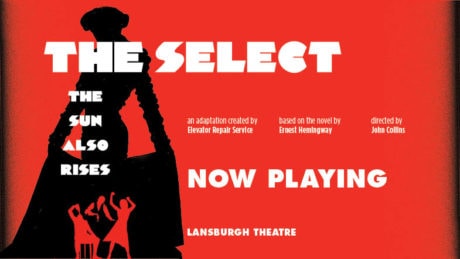 In The Moment: Elevator Repair Service’s ‘The Select (The Sun Also Rises’) at Shakespeare Theatre Company by David Siegel.