For the past year, Greenbelt Arts Center (GAC) has been on a fantastic streak as a venue for top-notch shows. GAC’s current show is an addition to that streak. With music and lyrics by William Finn, a book by Rachel Sheinkin, choreography by Rikki Howie Lacewell, and direction by Jeffery Lesniak, The 25th Annual Putnam County Spelling Bee, is an amusing musical ride for the entire family. It’s a B-L-A-S-T-!

The 25th Annual Putnam County Spelling Bee follows the trials of a group of adolescents, each with their own heart-breaking backstory,  who must spell their way through a long list of words in the titular spelling bee to be crowned the winner. Each character in the show is endearingly flawed; William Barfée (Joey Rolandelli in his fourth show at GAC) can only breathe out of one nostril and constantly has his name mispronounced by spelling judge and school Vice Principal Douglas Panch (Jim Adams).

I loved the chemistry between Rolandelli and Pino-Elliott. Adams, wearing his officious, coke-bottle glasses and gray suit, was hilarious as the slightly unhinged want-to-be-principal Panch, who carried a torch for his ex, Rona Lisa Peretti (Pamela Northrup). Todd Hines slayed his role as redneck-parolee-with-a-mullett Mitch, who gave the losing kids “comfort and a juice box.”

The musical numbers were lively and allowed for strong characterization. The opening number, the titular “The 25th Annual Putnam County Spelling Bee,” by the cast set a spectacular tone. Northrup sang beautifully in “The I Love You Song,” and Kronser had a fine solo in “My Friend the Dictionary.” I loved Rolandelli’s hoofing in “Magic Foot,”and Pino-Elliott’s solo in “Woe is Me” was dynamite.

Some of the words used in the performance would make a crossword champion run for cover like boanthropy, crepuscule, and more..look them up in your local dictionary.

Lesniak’s lighting design expertly enhanced the emotional highlights of the characters’ story arcs—particularly the spelling bee’ losers.’ The actors moved with alacrity thanks to Choreographer Lacewell (who directed Motherhood Out Loud, now playing at Vagabond Players). Lesniak’s set design was simple yet evoked the proverbial image of a Spelling Bee. Jeanne Binney and Gayle Negri’s costume design made the cast look very much the part of awkward adolescents.

Spelling Bee contestants chosen from the audience (ensuring the uniqueness of each show) and topical, torn-from-the-headlines jokes enhanced the show’s humor.

Running Time: One hour and 45 minutes (or longer with audience participation), with no intermission. 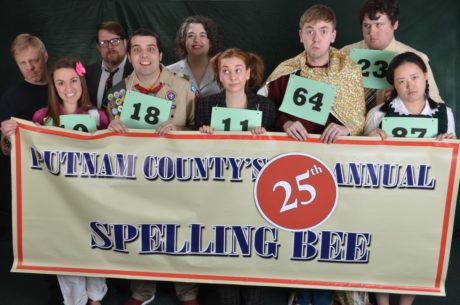