One of the natural vocal wonders of the world, the legendary entertainer and vocal artist Dionne Warwick beguiled the audience at the Bethesda Blues & Jazz Supper Club. The occasion to celebrate was primarily to see and hear the talented Ms. Warwick but the audience was also celebrating the Fourth Anniversary of the Bethesda Blues and Jazz Supper Club (and who can forget that this auspicious evening was the beginning of Mardi Gras?)

Ms. Warwick, who I had the pleasure of interviewing earlier, has had so many commercial recording successes that her sheer volume of recording output is practically inexhaustible—her renditions of the music of Burt Bacharach and the lyrics of Hal David are legendary. Ms. Warwick went on to a second career of artistic triumph when she topped the charts with “I’ll Never Love this way Again “ and “Déjà Vu” propelling onwards to the smash hit “That’s What Friends are For.

This commercial success (though totally merited – Ms. Warwick has five Grammy Awards as well–) pales beside the singular artistry, uniquely rhythmic phrasing and the palpable poignancy of her voice.

Like all the great vocal artists (such as Johnny Mathis, Barbra Streisand, and Sarah Vaughan–) Warwick’s voice is totally unique and distinctive—is there anyone else who remotely sounds like her or can deliver a lyric in her inimitable style?

The concert opened with a marvelous musical passage (courtesy of the four superb musicians who supported Ms. Warwick with superior instrumental brio throughout the evening) from her hit “Walk On By” which she soon launched into as she sang a fairly lengthy and luminous medley of her early hits.  This “trip down memory lane” included such musical gems as “Anyone Who Had a Heart”, “You’ll Never Get to Heaven If You Break My Heart”, “What Do You Get When You Fall in Love?” and “Message to Michael”.

Warwick’s light, slivery upper register is stylish and singular –but there is always an undercurrent of poignancy, hope and, often, a romantic essence in the vocal tone delivery. When Warwick’s high notes glide effortlessly off the resonant deep chest tones of her lower register, the vocal style becomes mesmerizing.

Ms. Warwick’s cover of “Alfie” has always been my favorite of her entire canon of song hits. The constant rising and falling of the melodic peaks in this song are no easy trick to pull off (many singers cannot sing the song but still try-) but Warwick captures all the emotional poignancy of this song in spades. Warwick sang in a more pensive and measured style than her original version and made the song all the more textured and dramatic as a result. (Is there any more difficult popular song to sing? – maybe “Lush Life” – but very few songs require the skill needed to make “Alfie” ring true -).

Ms. Warwick’s next concert segment highlighted her love for Brazil and Brazilian music. She is a great natural fit for this style of music with its’ natural air of spontaneity and freedom, its’ intermittent and quickly-paced pauses, and the poetic imagery of many of the many various songs’ lyrics.

Ms. Warwick shone especially on a swinging, jazzy, and Bossa Nova-infused rendition of her famous standard “Do You Know the Way to San Jose?” Her outstanding four band members were each introduced and given highlighted moments to improvise and show their musicianship. This entire Brazilian melodic musical interlude was invigorating and burnished with Ms. Warwick’s vocal verve.

Another decided highpoint (in an evening full of them!) was Ms. Warwick’s rendition of Hall David’s plaintive and haunting “99 Miles To LA”. The evocative and romantic tone of this stunning song melded with her voice to create a totally captivating mood.

Ms. Warwick closed her concert with a hopeful and idealistic rendition of the classic “What the World Need Now is Love” and encored with the affirming standard “That’s What Friends are For”.

A stunning concert with a legendary artist! The Bethesda Blues and Jazz Supper Club should be commended for showcasing the artistry of Dionne Warwick to the DC Metro Region! 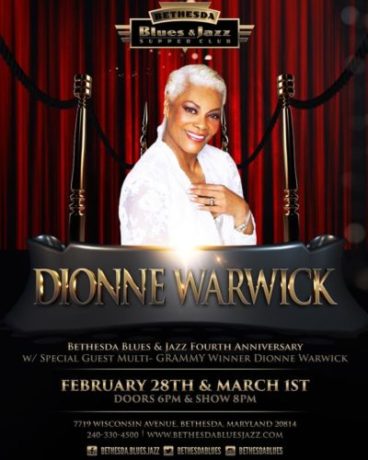