Just in advance of St. Patrick’s Day, Manayunk Theatre Company brings its tradition of Irish pub entertainment to Roxborough’s Tavern on Ridge with Irish-ish: A Trio of Irish Tales. Showcasing three new short works by emerging local playwrights, the themes run the gamut from fantasy to tragedy to dark comedy, in stories inspired by the people and culture of the Emerald Isle, with a distinctly post-modern American twist.

If you’ve ever wondered what the three key ingredients are in a classic Irish story, MTC Managing Director and Resident Playwright Gabriel Henninger will give you his witty recipe in Ir-ish. An all-female cast, directed with an eye towards the absurd by Shamus Hunter McCarty, leads us on a wild and fateful ride (cue spooky sound and lights), as four strangers have a strange encounter on a regional-rail line, in a tall tale that combines old myths with new technology and a running joke about Trump University. Katie Frazer puts the ire in Ir-ish as the train’s ill-tempered conductor; Laura Allen and Raina Searles play passengers Jamie and Kathleen, who meet, flirt, and do battle over a carry-on bag; and Colleen Corcoran commands the stage as the mysterious Moira the Mystic, the free-riding “trash heap” with a spot-on accent, magical powers, and a crazy concoction that conjures those three signature elements which, according to Henninger, make his fantastical farce unmistakably Irish!

Referencing the lyrics of two Irish folk ballads (“Black Velvet Band” and “Molly Malone”) and two songs by the ‘70s California rock band the Eagles (“Lyin’ Eyes” and “New Kid in Town”), MTC Artistic Director Sean Connolly weaves a dismal tale of domestic abuse and infidelity in Lyin’ Eyes. Director Cat Ramirez makes full use of the venue, moving the characters around the stage, through the audience, and behind the curtain, as singer/musician Caroyln Thorn, accompanying herself on acoustic guitar, sings and narrates the sad story. Karina Balfour brings a credible Irish accent and a tragic tone of unhappiness and desperation to the protagonist Molly, and David Cashell storms in and out as her cruel husband Tom; together they capture the plight of women caught in bad marriages and the fate that could await them should they try to break free.

Shots of liquor are swilled and gunshots ring out in Alex McCormick’s One Last Shot, or A Mexican Stand Off in Ireland, the last and longest (at about 35 minutes) of the three short plays. Under the direction of Gabriel Henninger (who also wrote Ir-ish for the trilogy), the terrific ensemble of Kelly McCaughan, Kevin Rodden, John Schultz, and Matt McWilliams is hilarious in the well-conceived parody of a bungling American hitman (Rodden) who walks into an Irish pub and attracts the attention of the lusty and loquacious bartender Erin (McCaughan), the preening but inept cop Charlie (Schultz), and the murderous but refined English boss Samuel (McWilliams), who hired him. All four actors deliver the dark laughs, eccentric personalities, distinctive speech patterns, and bits of physical comedy with gusto, making One Last Shot a most entertaining and engaging conclusion for MTC’s three-part production.

Reasonably priced food and drinks are available at the venue before, during, and after the show, so you can spend a full evening keeping the tradition alive with Manayunk Theatre Company’s Irish-ish: A Trio of Irish Tales. 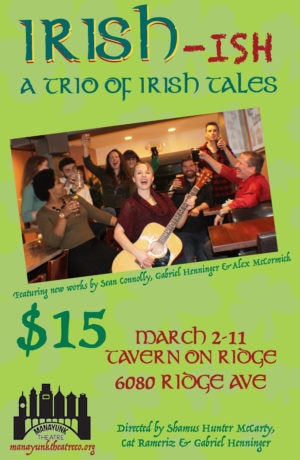