It was a thrill and a privilege to be at the grand reopening of Baltimore Center Stage last night. I felt like a movie star walking up the red carpet, past the searchlights, into the shiny new lobby. The redesigned Head Theater looked simply luxurious with its comfortable, plush, red seats. It was almost enough to be there with no play to see, but The White Snake by Mary Zimmerman made the evening even better.

Baltimore Center Stage’s season opener, directed by Natsu Onoda Power, is based on a Chinese fable. It follows White Snake and her friend Green Snake who decide they are going to use their magic powers to pop down to the human world for a day. Their plans change, however, the minute White Snake spots Xu Xian. Problems – and silliness – arise as White Snake and Xu Xian fall in love and the two snakes have to hide their true identities, while being tormented by a corrupt priest named Fa Hai.

The White Snake was entertaining and had the audience laughing, enjoying themselves from the very start. It was clear that director Power had cultivated an air of storytelling and lightness. The whole ensemble performed with a uniform, heightened theatricality, like one might see at a children’s theatre but not to that extreme. While being light and fun, the cast remained grounded in their characters. It cannot be stressed enough how much of an ensemble show this was, and how fantastic that ensemble was.

The ensemble members – Caitlin Cisco, Samy el-Noury, Jason Kao Hwang, Lucy Lavely, Pooya Mohensi, Brett Messiora, Jeff Song, Linden Tailor, Damian Thompson, Yukio Tsuji, and Joshua Ziemann – played many roles, skillfully adapting their vocal quality and movement to suggest different characters, as well as playing scenery. For example, when White Snake and Green Snake came down from their mountain, they traveled by cloud, which was shown by actors rippling large swaths of white cloth across the stage and the two snakes slowing stepping walking over them. There was also brilliant use of parasols throughout the productions, sometimes projected on, sometimes as a snakehead, and sometimes simply as parasols.

Aimé Donna Kelly as White Snake was a pleasure to watch. She played a mystical, legendary character with human grounding, yet playful lightness. She and Eileen Rivera (Green Snake) both worked their various versions of snake puppets with perceived ease, which allowed the audience to relax and simply see the puppets, not the mechanics behind them. Rivera was noticeably a favorite among the audience. She had excellent comedic timing with Greenie’s sassy comments, yet displayed ferocity when time to protect her lady, White Snake.

Joe Ngo played such a lovable Xu Xian that it was easy to believe how White Snake fell for him so quickly. Ngo’s performance was confident, passionate, and his deep love for his wife was absolutely moving. In contrast, Peter Van Wagner made a great villain as the evil, corrupt Fa Hai and was amusingly menacing. He was almost cartoon-like with his furrowed brow and coarse vocal quality. 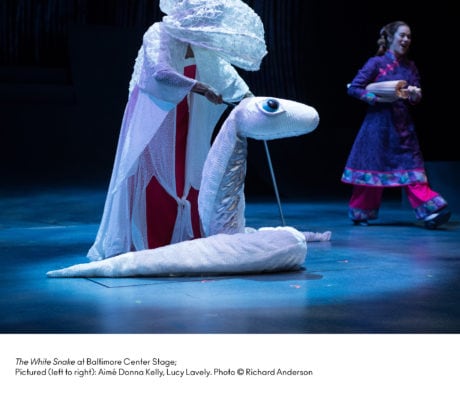 The beautiful work done by these actors would have been incomplete without the spectacular work done by the designers. Each design element completed the other. The lighting by Rui Rita perfectly brought out elements of the scenic and projection design by Hana S. Kim.

The movement of the costumes designed by Nicole Wee perfectly complimented the movements of the puppets deigned and constructed by Andrea “Dre” Moore. The sound design by Alex Hawthorn worked in concert with the music written and composed by Jeff Song to demonstrate the tone of different scenes and to tell parts of the story through song. Finally, the hair, wigs, and makeups designed by Tommy Kurzman matched perfectly with Wee’s costume designs to portray a unified character personality. All of these design elements and more went into this amazing production and showed what it means to put on professional quality theatre.

If I had to choose, what drew my attention most often were the ensembles created by Kurzman and Wee. I was lucky enough to be seated close enough to the stage to appreciate all the small, beautiful details like White Snake’s pants which had a subtle scallop pattern imitating snake scales, or the pink embroidery on Green Snake’s top and pants which brought out the shades of pink polka dots on her adorable, full skirt. I was also close enough to see how skillfully Fa Hai’s tattoos were put on because even in my seat they looked real. 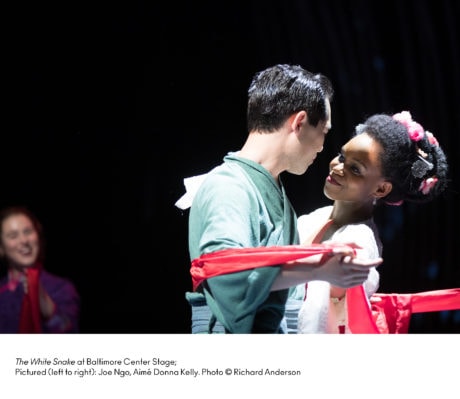 The White Snake is a theatrical spectacle that was fun and engaging from the start, and really deserves to be seen! I cannot put into proper words how cool the effects were, or how drawn in I was by the actors. So I recommend you experience it all for yourself so you may sympathize with my difficulties as you tell your friends about all the fun you had at Baltimore Center Stage’s The White Snake.