Well lately it has “sucked to be me” with new health challenges, the political climate ain’t pretty, and you-know-who has moved to DC, so I desperately needed me a dose of Avenue Q to clear the dark clouds away, and I found a hilarious group of adorable puppets and a group of talented actors pulling the strings – right here in my own backyard – up the Pike – at Mongomery College. It was the best medicine for everyone who showed up, and the musical that I love, in the hands of Director Jessica Lefkow and her talented cast, was just plain hilarious! 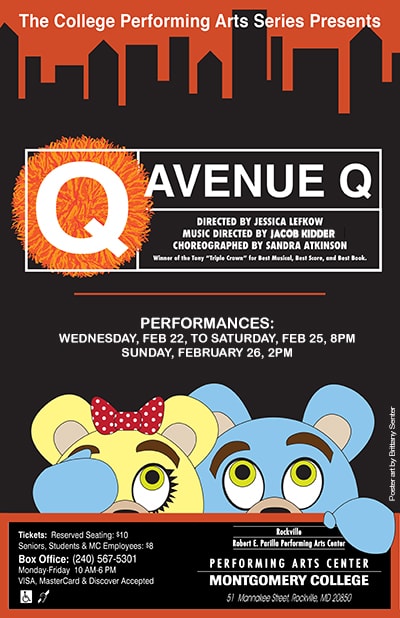 Let’s be honest, Avenue Q is an ensemble piece and for the show to soar you gotta believe that these kooky, but very likeable and furry puppets and neighbors, really care about each other – and this ‘dream cast’ made me believe just that from the get-go while singing “The Avenue Q Theme.” There was so much love and chemistry up on that stage that I wanted to hug them all and thank them for whisking me away and bringing me and the appreciative audience so much joy. So thank you everyone for that! Unforunately, I caught the final performance and it has closed. DAMN!

This Tony Award-winning musical beat out Wicked for Best Musical in what had to be the shocker of the century. And now so many years later – although I am a fan of Wicked – I can see why. It’s filled with relatable characters dealing with real issues we still are facing today – prejudice, racism, unemployment, and just trying to pay the bills. What’s so refreshing is that these characters can laugh at each other and for each other when times get tough and they reach out to each other and care for each other. How wonderful is that?

And a special mention to Set Designer and Head Carpenter Roger Bridges. Your Avenue Q was awesome! And to Patrick Lord for his ingenius projections which added dozens of guffaws to an-already outrageously funny show.

–“Everyone’s A Little Bit Racist’ with everyone having a really great time with those clever and very truthful lyrics.

–Listening to the vocal beauty of Samantha Shoop singing ” There’s a Fine, Fine Line.” Sheer beauty of a song I love. (In fact, when I was tossing out an ex a few years ago, when he asked “Why?” I said, “Wait, let me show you the door via Avenue Q, and I said, “Listen to these  lyrics:

There’s a fine, fine line between love
And a waste of time…
And I don’t have the time to waste on you anymore.
I don’t think that you even know what you’re looking for.
For my own sanity, I’ve got to close the door
And walk away…

And his reply, “Yep. That’s a really good lyricist.” And out he went. True story.)

“The More You Ruv Someone” sung by Ms. Batista and Ms. Shoop, who pefectly displayed the many and mixed emotions and the ups and downs when you ruv so much you just pray that they finally get a job and start acting their age.

It’s too bad the show had such a short because I would have liked to have visited that wonderful neighborhood again and again. 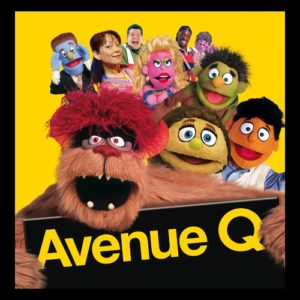