I don’t even know how to describe what took place at Theatre on the Run last night. All I know is that it was one of the most fun nights I had in the theatre in a very long time. Evil Dead: The Musical, presented by Dominion Stage at Theatre on the Run, is a fun and gore-filled evening that had me smiling from beginning to end. 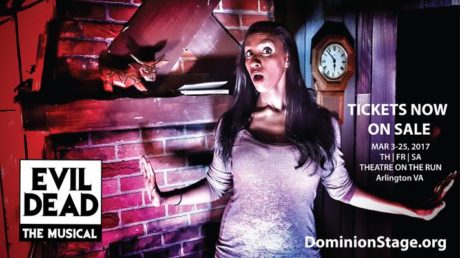 Of course the basis of Evil Dead is the franchise of the same name that was brought to life by Sam Raimi, later director of the original Spider-Man films (one of the characters remarks “I watched Spider-Man on the plane. Very poorly directed.” A nice in-joke). Evil Dead combines plots and characters from all three Evil Dead films and jumbles them together for an evening of hilarity and fun.

The show opens with 5 college kids spending their spring break in an abandoned cabin in the middle of the woods – because when has THAT ever been a terrible idea? The kids soon discover Candarian demons are among them and when Cheryl (played by scene-stealer Colleen Robinson) gets possessed by a demon, that’s when all hell breaks loose. It’s up to Ash (Nick Stone) to save the world from the evil demons that have taken over our world.

Nick Stone plays Ash, the role made famous by Bruce Campbell in the films. Stone shows much of the same leading man, heroic charm that you’d expect from such a pulp story, with a nice singing voice to boot. 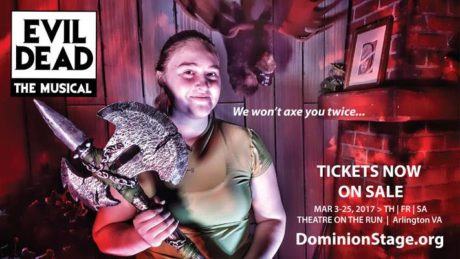 Jeff Ostendorff plays Ash’s dim-witted and over-sexed friend Scott, with great comedic timing and charm. His duet with Stone (What the F**k Was That) was one of the highlights. Kim Braswell plays Annie, the heroine, with her nice voice and great comedic timing, especially during her solo number “All the Men in My Life Keep Getting Killed by Candarian Demons.” Colleen Robinson plays Ash’s sister Cheryl, who is the first of the group to fall under demon possession. Robinson stole every scene she was in with her comedic chops and stellar voice.

The production was directed by David M. Moretti. He picked a game cast and worked wonderfully with the actors to accentuate the humor. The choreography was by Michael Page. The biggest dance number in the show comes towards the end (“Do the Necronomicon”) in which almost everyone in the cast participated. It’s fast-paced and moving and those demons sure had some stellar dance moves. 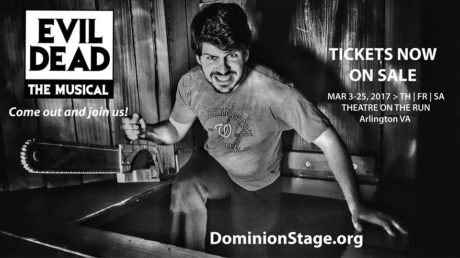 I was also particularly impressed with the log cabin setting designed by Jared Davis. Behind this curtain of trees, was this picturesque log cabin, with many knickknacks including a fire place, a bar, and a talking moose head. Evil Dead is a lot of fun but all that being said, while I enjoyed the production, I did find myself thinking that getting to the ending took too much time. Maybe it was the writing.

When I was asked if I wanted to sit in the “splash zone,” I knew I was gonna be in for a treat. If you choose to sit in seats in the red, make sure you have ‘coverage.’ All I’m saying.

Subtlety and sincerity are not words to describe this show. If you find The Rocky Horror Show or Little Shop of Horrors too serious and deep, than you’ll love Evil Dead: The Musical. Check it out at Dominion Stage! It made a splash with me!

Evil Dead: The Musical plays through March 25, 2017, at Dominion Stage performig at Theatre on the Run – 3700 South Four Mile Run Drive, in Arlington, VA. For tickets, buy them at the door, or purchase them online.